New York Attorney General Letitia James filed a series of court documents against President Donald Trump’s businesses and son Eric Trump aimed at forcing the release of sensitive financial information that may have been used to commit fraud.

James is currently investigating whether the Trump Organization–including the 45th president himself–improperly inflated the value of assets “on annual financial statements in order to secure loans and obtain economic and tax benefits,” according to the memo.

The inquiry largely focuses on whether or not the Trump Organization improperly inflated the value of the Trump family’s palatial Seven Springs Estate in Westchester County–a suburb of New York City.

“Valuations of Seven Springs were used to claim an apparent $21.1 million tax deduction for donating a conservation easement on the property in tax year 2015, and in submissions to financial institutions as a component of Mr. Trump’s net worth,” the filing continues–using a real estate law term that essentially describes a limited gift of a parcel of a land. “[The attorney general] has not concluded its investigation and has not reached a determination regarding whether the facts identified to date establish violations of law.”

So, why the filing?

The subpoenas are allegedly being ignored.

A press release from James’s says those subpoenas would provide her office “with thousands of documents and testimony from multiple witnesses regarding several, specific Trump Organization properties and transactions.” James specifically calls out Trump Organization Executive Vice President Eric Trump and notes that he “was intimately involved in one or more transactions under review, as well as the production of thousands of documents wrongly withheld.”

According to the filing, James and the Trump Organization have been engaged in “extensive good-faith discussions” over the requested materials but “the parties are now at impasse” and the attorney general is asking the courts to help sort out the logjam.

Headlines are likely to focus on the role that the 45th president’s second-oldest son plays in the legal battle.

“Eric Trump has no plausible basis to defy a lawful subpoena, and his testimony should be compelled,” New York’s memo says–noting that the younger Trump has not even attempted to formally quash the extant subpoena but has instead simply dodged the request.

“The Trump Organization has already agreed that Eric Trump is a custodian whose documentary evidence would be produced in response to the Attorney General’s subpoenas, and numerous relevant communications involving Eric Trump have been produced by other parties (in many cases with notice to, and no objection from, the Trump Organization),” the filing continues–before a series of redactions begins.

The factual details of Eric Trump’s alleged knowledge largely occur behind those black censorial lines. Per the filing: 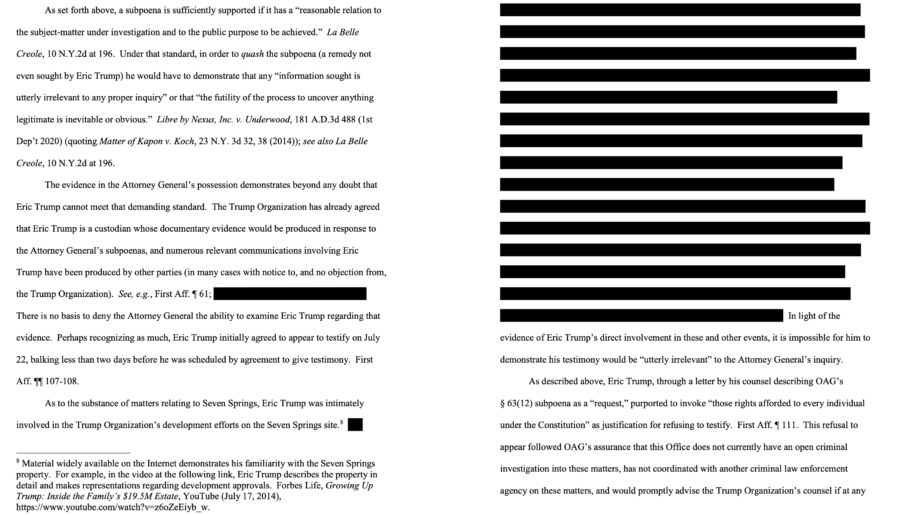 “In light of the evidence of Eric Trump’s direct involvement in these and other events, it is impossible for him to demonstrate his testimony would be ‘utterly irrelevant’ to the Attorney General’s inquiry,” the James memo continues.

The attorney general’s investigation is explicitly premised on congressional testimony from Michael Cohen in February 2019 when he testified before the House Oversight and Reform Committee that his former boss’s annual financial statements inflated the values of various assets in order to obtain favorable terms for loans and insurance coverage, while also deflating the value of other assets to reduce the Trump Organization’s real estate taxes.

“Nothing will stop us from following the facts and the law, wherever they may lead. For months, the Trump Organization has made baseless claims in an effort to shield evidence from a lawful investigation into its financial dealings,” James said in a statement. “They have stalled, withheld documents, and instructed witnesses, including Eric Trump, to refuse to answer questions under oath. That’s why we’ve filed a motion to compel the Trump Organization to comply with our office’s lawful subpoenas for documents and testimony. These questions will be answered and the truth will be uncovered, because no one is above the law.”