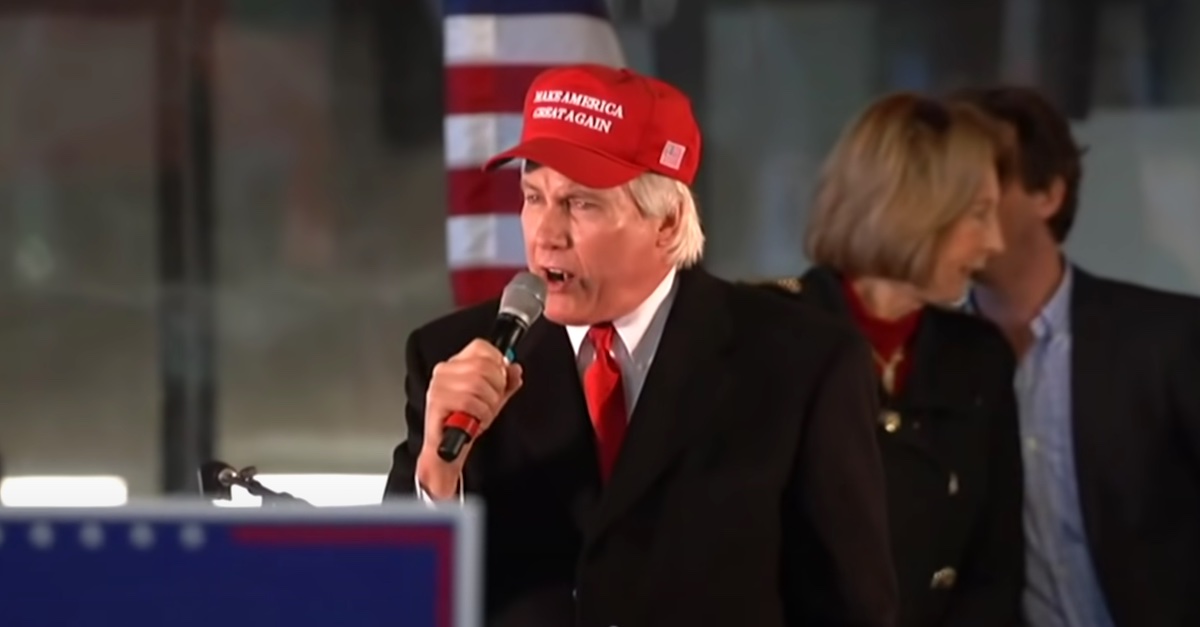 Attorney Lin Wood, a stalwart supporter of former president Donald Trump leading up to and after the 2020 election, was ordered Thursday evening to explain to a federal judge why he should not be punished for posting video of his own recent sanctions hearing on Telegram.

The demand for Wood to enter a formal, written excuse for his actions came after a Law&Crime report by Senior Investigative Reporter Adam Klasfeld. The report, which was published Monday evening, noted that Wood, co-counsel Sidney Powell, and other several attorneys who litigated to stymie the 2020 election were forced to attend a sanctions hearing ordered by the judge overseeing the case. Wood said he played “no role whatsoever” in drafting the so-called multi-state “Kraken” litigation — even though his name appeared on at least one court document — the original lawsuit.

“Within hours of the close of those proceedings, Lin Wood shared a video snippet on his more than 840,000-follower Telegram account, featuring Sidney Powell’s closing monologue,” the Monday Law&Crime report noted. Wood deleted the post, saying that he did not record anything but shared a video recorded by someone else.

“I was asked by my present counsel to remove the Telegram post where I had shared another channel’s recording of Sidney Powell’s comments at the end of the hearing,” Wood wrote. “I followed his instructions.”

The underlying sanctions proceeding was held by videoconference. Though the public could watch the proceeding, recording and retransmitting what occurred was strictly prohibited by the judge’s rules.

Wood’s retransmission of the original sanctions hearing may is on track to result in additional potential sanctions.

In issuing Thursday evening’s two-page order, Judge Linda V. Parker, a Barack Obama appointee to U.S. District Court in the Eastern District of Michigan, declined to consider holding Wood in “criminal contempt of court” over the recent Telegram post. But it did consider that Wood might need to be “disciplined in accordance with” another local court rule.

The rule Judge Parker identified, Local Rule 83.22(d), allows a judge to discipline an attorney by means other than suspension or disbarment (from the Eastern District of Michigan specifically). Among the possible reasons for discipline include the rather broad rationale that the attorney engaged in “conduct unbecoming of a member of the bar of this court.”

The rule lays out the procedure to be followed going forward:

Prior to the imposition of discipline, the attorney shall be afforded an opportunity to show good cause, within such time as the Court shall prescribe, why the discipline should not be imposed. Upon the attorney’s response, and after a hearing, if requested and allowed by the judicial officer, or upon expiration of the time prescribed for a response if no response is made, the Court shall enter an appropriate order.

Judge Parker’s order contemplates precisely that — and forces a reply in exactly one week’s time.

Local Rule 83.32(e)(2) is the rule which governs the possession and use of electronic devices in federal court.

The sanctions-on-top-of-sanctions posture of the current proceedings add yet another layer of intrigue to the “Kraken” election litigation. All of the underlying cases in various states — including Michigan — were summarily tossed out of court. Powell claimed in a defamation action subsequently filed against her by Dominion Voting Systems that “no reasonable person” should have believed that her election conspiracy theories contained actionable “statements of fact.” But she then walked back that posture in Michigan’s “Kraken” sanctions case when local and state governments pounced on her dismissive characterization of her own case. Thus, Powell argues that her legal claims that the election was stolen sit in somewhat of a legal no-man’s-land between non-fact (ergo, nondefamatory speech) and legally recognizable grievances that the court should have taken seriously (for purposes of sanctions).

In response to a general inquiry by Law&Crime seeking comment about Judge Parker’s order, Wood responded as follows to this writer:

I have not seen the order but I no longer comment to Mockingbird propaganda rags like Law and Crime. I just pray for my enemies.

Wood’s most recent Telegram posts as of the time of this writing refer to a ProPublica reporter as a “Communist” and suggested his “puppies” were “well-trained on how to deal with” such types. He then posted a link to “Who Let the Dogs Out,” a hit from the year 2000 by the Baha Men. He then posted several images of what apparently are his canine companions while continuing to berate the ProPublica reporter.