Man Who Allegedly Dressed as Book of Mormon Figure Who Raised Armies Against Tyrants Arrested Over Jan. 6 Attack 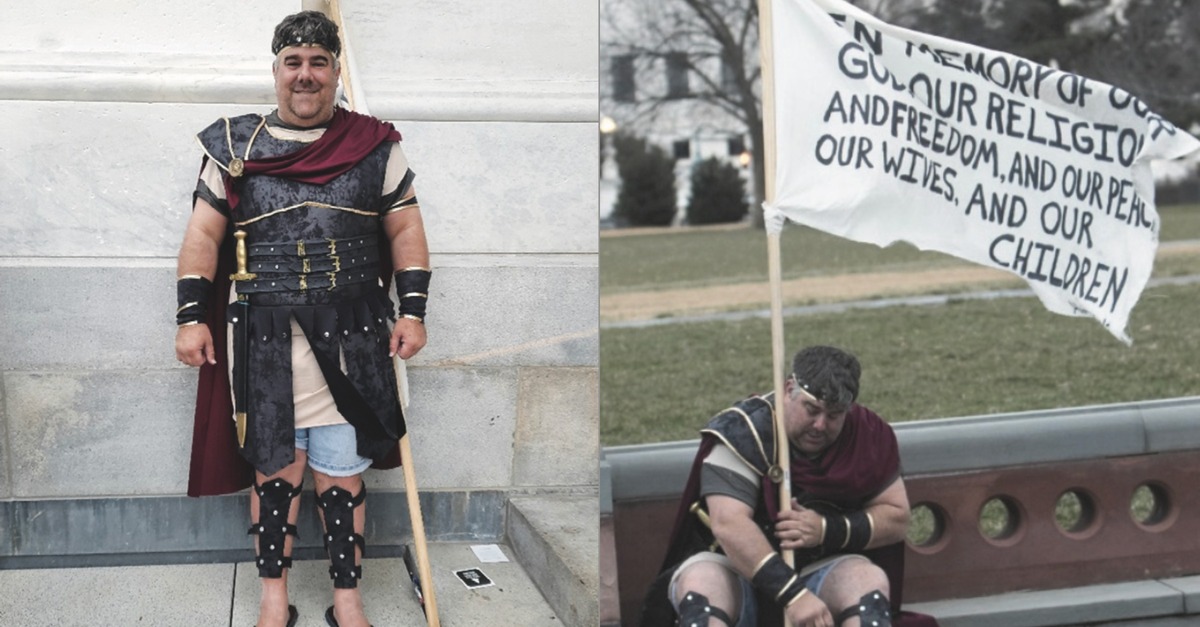 Federal authorities have arrested a man who they claim dressed up as a prominent figure from the Book of Mormon during the Jan. 6 attack on the U.S. Capitol Complex.

According to the text held sacred by members of the Church of Jesus Christ of Latter-day Saints, Captain Moroni was “the chief captain over the Nephites” and lived during the first century BCE.

Nathan Wayne Entrekin stands accused of committing two relatively minor crimes at the U.S. Capitol while donning a Roman-era gladiator-style costume in order to take part in the deadly pro-Trump breach — a religious cosplay the FBI felt important enough to document at length.

“In all the photos and videos of the defendant, he is carrying a wooden dowel with a piece of white cloth attached,” a statement of facts filed in U.S. District Court for the District of Columbia notes. “The cloth appears to have the following text handwritten on it: IN MEMORY OF OUR GOD, OUR RELIGION, AND FREEDOM, AND OUR PEACE, OUR WIVES, AND OUR CHILDREN. ALMA 46:12”

Captain Moroni is a figure from the Book of Mormon, a text that members of the Church of Jesus Christ of Latter-day Saints and its offshoots consider a historical account of Israelites who traveled from Jerusalem to an unknown location in the Americas around 600 B.C. Within the Book of Mormon, at or around the year 73-72 B.C. (by the book’s own timeline), Cpt. Moroni sought to defend the liberties of his people—the Nephites—from another group—the Amalickiahites—that wanted to overthrow democracy and install a king.

A footnote goes on to make the case for such analysis:

Context and understanding play a large role in this case, especially in establishing the defendant’s intent and state of mind as he travelled to Washington, D.C., went to the Capitol, and went inside. Given the fact that the plot of the Book of Mormon and the story arcs of its figures—especially Captain Moroni—are essential to understanding the defendant’s actions on January 6, 2021, your affiant includes a brief summary of Captain Moroni and the Title of Liberty.

The explanation of the Mormon parable continues for several more paragraphs to essentially make the point that Moroni is viewed as a person who raised armies and that “his followers executed anyone who rejected the Title of Liberty [the all caps words noted on the cloth above] or who refused to accept democracy over tyranny.”

According to authorities, “the defendant planned on attending the rally dressed as Captain Moroni.” A review of his Twitter account appears to depict the Mormon figure and contains a tweet that says: “Hey Patriots! Captain Moroni is coming to D.C. on Jan. 6. Yay! Alma 46:12.”

During a non-custodial interview, Entrekin allegedly told FBI agents that former president Donald Trump‘s calls “inspired him to attend the rally,” according to the statement of facts.

“To get to Washington, D.C., from Cottonwood, Arizona — a journey of over 2,200 miles — the defendant stated that he drove there by himself in his personal car,” the court document goes on to note.

“The defendant further stated that he missed then-President Trump’s speech on the morning of January 6, 2021,” the filing continues. “The defendant claims that at approximately 11:30 AM, he saw a mass of people walking towards the Capitol. He decided to follow them.”

Entrekin allegedly went on to tell the FBI that he considered his time in the Capitol “solemn” and “revered” and that he quickly decided to leave when he saw broken glass and the “looting of offices.”

Digital evidence allegedly willingly provided to authorities, however, “at times confirmed and at times contradicted the claims that the defendant made,” according to Culbert.

Most of that evidence was culled from Entrekin’s phone and is largely a collection of videos narrating Entrekin’s alleged time in the Capitol — videos and narration addressed to his mother.

The defendant allegedly says the following in one such video:

I’m here for Trump. Four more years, Donald Trump! Our rightful president! I made it to the relative top, anyway. Oh my gosh, how many of us are here? Must be like, millions. Couple million, maybe. I keep running into trees, though. I gotta get this first, though, before my costume falls off me. Check this out, Mom. All those people.

Entrekin allegedly says the following in another video:

Why can’t you people just do what we want? Why do you gotta make it so hard? Why do you take our money and use it for nefarious purposes? Every man woman and child should have a house in this free nation. We should not have homeless at all. We’re a rich enough nation everyone can have a house of their own. $600 my ass. Get us a fuckin’ house! Buy us houses! You shut us down and you stay up? You keep our money? I know, my mom’s gonna hear that. Sorry, Mom. I dropped some f-bombs. Hahaha.

Overall, the FBI marshaled at least eight videos during the defendant’s time in the Capitol — and pointed to his allegedly captured statements and impressions to contest the idea that he was reverent and solemn about the trip, as well as his claim that he didn’t know he was not allowed to enter the seat of national legislative government.

Cited in support of this apparent incongruity is that Entrekin allegedly noted the scent of tear gas, described the advent of “riot police” to his mother, said “they” were pushing people out of the building, and noted what sounded like “machinegun tasers.” Additionally, the FBI chastises Entrekin for allegedly laughing at a person who stole a bottle of whiskey from inside the building, for himself haranguing members of Congress and for joining the rioters’ U-S-A! chants.

“Inside the Parliamentarian’s office, the defendant recorded the destruction and what he described as looting,” Culbert goes on to allege. “He recorded the papers strewn about and broken windows, expressed distress. The defendant further began shouting that LEOs were using rubber bullets. Only at this time did the defendant leave the Capitol for the first time. He would reenter a short time later.”

If convicted as charged, Entrekin could spend well over a year in prison — though a maximum penalty here is exceedingly unlikely.