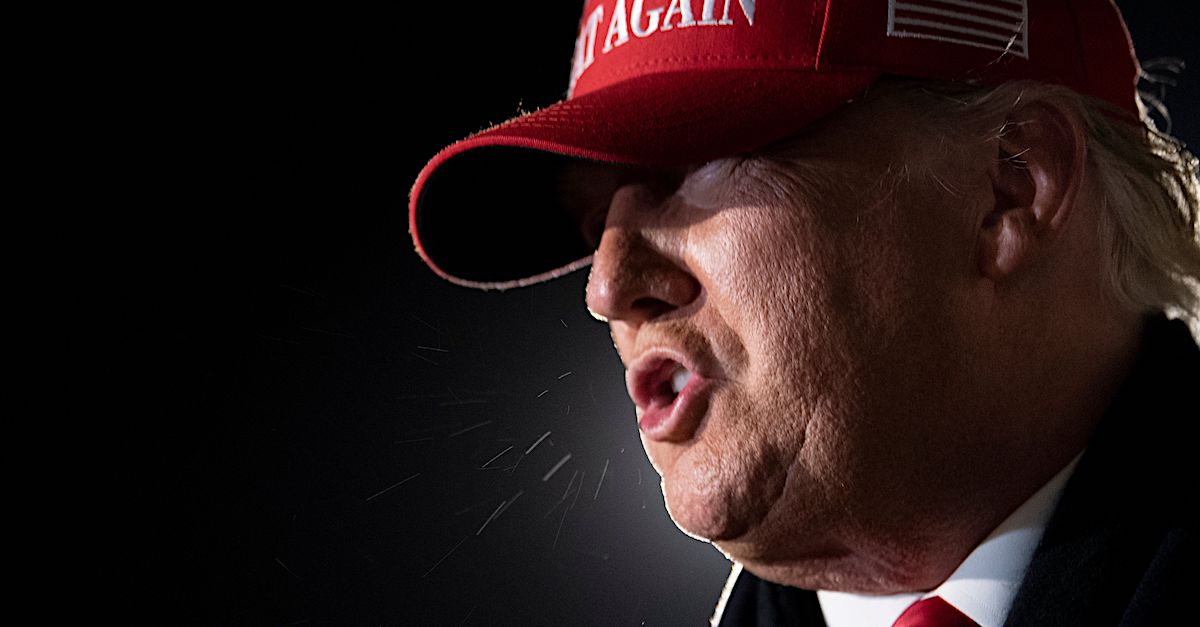 The Wednesday afternoon assault on the U.S. Capitol Complex by right-wing rioters quickly led to concerns that President Donald Trump might issue blanket pardons for all of his supporters who took part in the unprecedented, for the modern era at least, assault.

That meta debate quickly turned to considerations of impeachment and removal via the process allocated to the U.S. Congress under Article I, Section II and Article II, Section IV of the U.S. Constitution.

“Here’s another reason to impeach and remove immediately,” CNN legal analyst Elie Honig advised via Twitter. “Trump can issue a blanket pre-emptive pardon for anybody who was at the Capitol building today (or at least try to). Given his comments today and recent behavior in general, you trust him not to?”

Removal through incapacitation via the 25th Amendment was also on the radar of legal commentators and reportedly being discussed by members of the 45th president’s cabinet heading into Wednesday evening. Democrats on the House Judiciary Committee collectively pleaded with Vice President Mike Pence to invoke that provision of the nation’s charter for “the sake of our democracy.”

The commentariat was broadly of two minds about the best course of action–one side suggested the 25th Amendment was an easier and swifter way for Trump to be forced out of power while impeachment would necessarily be longer and more drawn out.

The pro-impeachment chorus noted that immediately gifting Pence the power of the presidency was itself fraught with perils à la Gerald Ford’s widely-despised pardon of Richard Nixon following the Watergate scandal and that removal via incapacitation would leave the door open for Trump to run for president again in 2024 whereas impeachment could very well result in the former Apprentice star being barred from ever again holding public office.

The disagreement–really an exploration of various perspectives–was relatively polite under the circumstances. Though some Democratic Party lawmakers immediately pushed back against the impeachment movement being spearheaded by Rep. Ilhan Omar (D-Minn.).

Michigan University College of Law Professor Brian Kalt suggested that the 25th Amendment route, while more expeditious, could result in Trump eventually clawing his way back into the presidency–even before President-elect Joe Biden is inaugurated on January 20.

“It’s no substitute for impeachment/removal,” he argued.

If 25A4 is invoked and the president declares “no inability exists,” he does NOT retake power immediately. The VP remains as acting president during the four-day waiting period.

I devoted a whole chapter to explaining this in my previous (2012) book. https://t.co/evOG8OCUp0

Missouri University School of Law Professor Frank Bowman pointed out that the speed with which the U.S. Congress might take action against Trump is ultimately up to them and could be quite expeditious indeed.

2/2 but in the end, constitutionally, how they proceed, and how fast, is entirely up to them.

While talk of removing the president, one way or another, is considered unlikely by some legal experts, the concerns here are decidedly not academic.

The prospect of pardons from Trump, whether for his acolytes, his family or even potentially himself, is seen as a great and possibly bipartisan motivator for politicians in Washington, D.C. to act quickly in an effort to neuter the lame duck president’s still-vast powers before further violence erupts—as many of the insurrectionists suggested it might on Thursday—and before those responsible for Wednesday’s violence can be held to account.

To be clear, Trump has, at least so far, given no indication that he intends to pardon himself or anyone else in connection with Wednesday’s shocking events. But the impetus for bold and decisive action by lawmakers and certain exasperated elements within the White House remains due to the historic nature of the ongoing crisis in the nation’s capital.

But regardless of how those impeachment, removal and pardon potentialities all play out over the coming hours, days and weeks of Trump’s floundering presidency, there are various criminal charges the nation’s executive branch cannot interfere with at all.

Just a friendly reminder:
§ 10–503.16. Unlawful conduct.
(a) It shall be unlawful for any person or group of persons:
(1) Except as authorized by regulations which shall be promulgated by the Capitol Police Board:
1/

(B) To discharge any firearm or explosive, to use any dangerous weapon, or to ignite any incendiary device, upon the United States Capitol Grounds or within any of the Capitol Buildings; or

Any violation of § 10-503.16(a), and any attempt to commit any such violation, shall be a felony punishable by a fine not exceeding $5,000, or imprisonment not exceeding 5 years, or both.

One local D.C. law prohibits the carrying of “any firearm, dangerous weapon, explosive, or incendiary device” onto the U.S. Capitol grounds. That same law contains steep penalties for the initial violation and also, logically, prohibits the use of any such weapons or devices as separate offenses. Any of the rioters who came armed for bear face five years in prison for each violation.

In fact, the broader D.C. statute cited by Bratspies is effectively a carbon copy of the most likely federal charges the rioters face for their Wednesday imitation of the 1923 Beer Hall Putsch.

Some of those enumerated crimes may appear somewhat puzzling–such as time, place and manner restrictions on “loud” speech–but are on D.C.’s local books regardless.

RELATED: Seditious Conspiracy? Rebellion? Insurrection? Whatever the Charge, Federal Law Will Not Be Kind to the Pro-Trump Mob.

According to the Constitution, U.S. presidents “shall have Power to grant Reprieves and Pardons for Offenses against the United States, except in Cases of Impeachment.” The U.S. Supreme Court has repeatedly held that the power itself is not reviewable.

The presidential pardon power is therefore best understood as all-but absolute–but only when the crimes absolved are federal.

And, since the pardon power only extends to federal criminal violations, Trump’s alleged fascist shock troops might very well find themselves out in the cold no matter what efforts the fading president makes to inoculate them against legal culpability.