Seditious Conspiracy? Rebellion? Insurrection? Whatever the Charge, Federal Law Will Not Be Kind to the Pro-Trump Mob. 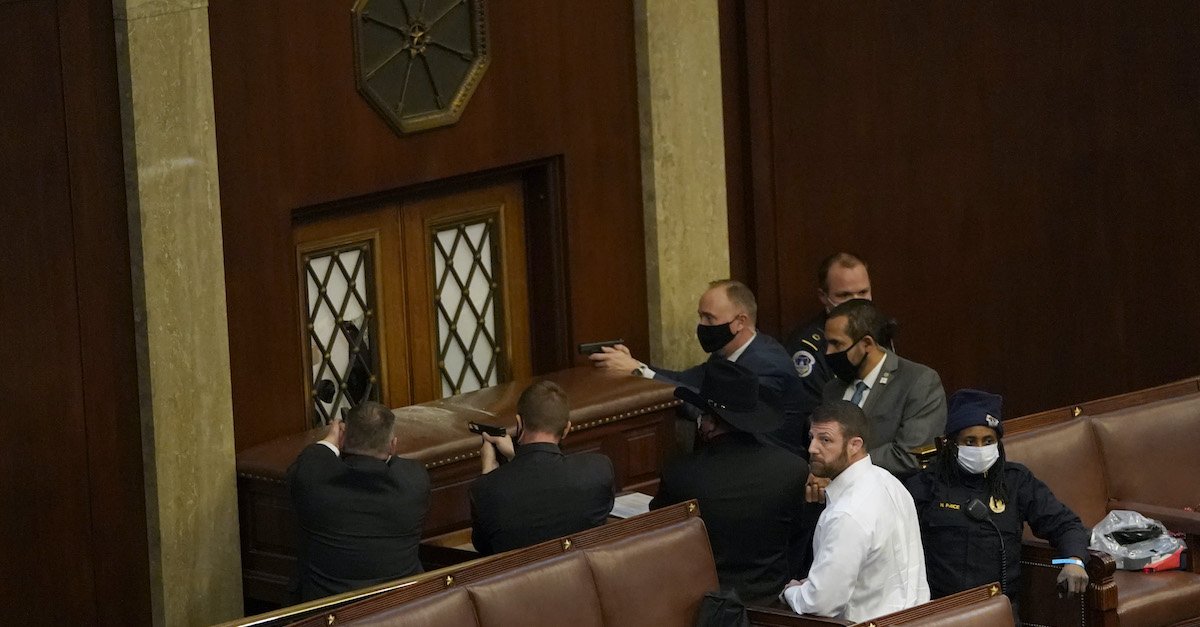 U.S. Capitol police officers point their guns at a vandalized door in the House Chamber during a joint session of Congress on Wednesday after pro-Trump rioters breached the building to stop Joe Biden from ascending to the presidency.

Self-professed supporters of President Donald Trump waved confederate flags, wore QAnon-themed costumes and ski masks, bore various far-right insignia, and wielded improvised chemical weapons when they stormed the U.S. Capitol Complex on Wednesday and sent the nation’s seat of government into chaos. Collectively, they scuttled plans to count Electoral College votes on the day mandated by federal law for the process to occur.

Legal experts immediately likened the unprecedented scene to an instance of outright sedition committed by stalwart followers of the 45th president and implicitly supported by Trump himself.

“Impeach him again, and indict him for conspiracy to incite a riot and sedition,” suggested national security attorney Bradley P. Moss.

While the president’s alleged culpability for the attack on the Capitol and the broader responsibility borne by his Republican Party is currently an open question among legal experts and political actors weighing their options, those who actually undertook overt acts will almost certainly find themselves subject to severe legal jeopardy under federal law.

The most likely law that could be used against the rioters is 40 U.S.C. § 5104, a broad prohibition against sundry “unlawful activities” on U.S. Capitol grounds.

The law criminalizes “violent entry and disorderly conduct,” bars people who are not government officials from bringing “firearms, dangerous weapons, explosives, or incendiary devices” onto Capitol grounds (D.C. also outlaws such acts, as we discuss here), penalizes “injuries to property” and also prohibits “obstruction of roads” on the Capitol grounds “in a manner that obstructs or hinders their proper use.”

Here, various contingents of pro-Trump rioters–described by commentators as fascists and described by Senate Minority Leader Chuck Schumer as “domestic terrorists” and “thugs”–were clearly engaged in behavior and conduct that qualifies as violent and disorderly. Barricades were breezed by and outnumbered police were overrun; windows were smashed; doors were battered. The statute itself even criminalizes uttering “loud, threatening, or abusive language,” all of which was on display by the right-wing individuals who took part in the mayhem.

Additionally, multiple videos from myriad witnesses on the scene show that many of Trump’s supporters came with weapons in tow. Allegations along those lines from law enforcement followed and at least five weapons were recovered by Capitol Police. Each person who brought a weapon to the Capitol Complex riot stands to be prosecuted under the statute at issue. As for whether the roads were obstructed, again the video evidence is instructive here: scores of pro-Trump adherents effectively seized the U.S. Capitol by overwhelming the poorly-guarded buildings there on Wednesday and impeding the normal flow of traffic.

Another suite of potential (albeit extremely serious) law on point here is codified at 18 U.S.C. Chapter 115 under the heading of “Treason, Sedition, and Subversive Activities.”

Specifically, the numerous people who–sometimes easily; sometimes through the use of concerted force–made their way past Capitol security and police on Wednesday may find themselves open to charges of seditious conspiracy and rebellion or insurrection.

In fact, while largely ignoring the “unlawful activities” section of the law, legal commentators mostly focused on those two eye-catching laws throughout the day, even though the former is likely to be a much more tidy method for potential prosecution than the latter. Let’s explore those two headline-blaring crimes in turn.

Contained at 18 U.S.C. § 2383, rebellion or insurrection under federal law is defined as:

Whoever incites, sets on foot, assists, or engages in any rebellion or insurrection against the authority of the United States or the laws thereof, or gives aid or comfort thereto, shall be fined under this title or imprisoned not more than ten years, or both; and shall be incapable of holding any office under the United States.

Here, several hundred pro-Trump assailants breezed past D.C. Metro and Capitol Police as they made their way into the halls of government. Many of the individuals destroyed property and shouted slogans asserting they were intent on carrying out a revolution. While several videos suggested that at least some police officers resigned themselves to the situation or even permitted the mob to advance, an emerging narrative asserts that many of the officers were overwhelmed and did not want to risk their own safety given the size of the threat and the relative lack of immediate backup.

In any event, the pro-GOP throng was caught on video “set[ting] on foot” into the U.S. Capitol, resulting in the underground evacuation of members of Congress, their staffs, and other Hill employees. Multiple people were seen using weapons and implements of various sorts to cause property destruction. Others stole documents from congressional desks. Some individuals went so far as to assault law enforcement officers. One woman was even killed when she reportedly charged law enforcement; others were injured as a result.

The force used here was obvious and the actions documented on video — along with the shouted slogans employed by the rioters — almost certainly evidence a desire to rise up against the authority of the United States. To belabor the point: the country’s seat of government was attacked in an attempt to stop the counting of electoral college votes. These were direct affronts against the laws of the country and the procedures that determine the transfer of power. Those laws specifically state that Jan. 6 is the date those procedures must occur; putting off the count is not easily contemplated under relevant statutes.

The sheer number of participants here — well over two individuals — also offer would-be prosecutors a prime argument for seditious conspiracy charges. Their opposition to the electoral college vote counting was exercised and opposed with clear force. The crowd also clearly did “prevent, hinder, or delay the execution” for the Electoral Count Act — the law which governs the counting of electoral college votes — and, again, they clearly used force to do so. Additionally, several individuals are accused of using force to “to seize, take, or possess” property from various members of Congress.

Elected officials, mostly Democrats, excoriated the shocking display as an attack against U.S. democracy itself. President-elect Joe Biden said the day’s events constituted an “assault on the citadel of liberty” and asserted that the assault “bordered” on sedition as well.

Some legal observers agree that the political rhetoric here likely matches well with the alleged crimes — and then some.

“It doesn’t border on sedition,” asserted Benjamin Wittes, the founder of the national security law blog Lawfare, while taking issue with Biden’s apparent caution. “It is sedition.”

Notably, former deputy attorney general Jeffrey Rosen, now the acting Attorney General of the United States, previously suggested the use of seditious conspiracy charges against Black Lives Matter protesters over some of the more careening racial justice protests in response to police killings of Black people last summer. Rosen’s embrace of that law may, however, offer a compelling sort of precedent for the incoming Biden administration and his would-be attorney general.

Sedition charges, however, are few and far between. Rebellion or insurrection charges are all-but unheard of in the United States, leaving the catch-all “unlawful activities” statute a far more likely avenue for prosecution. Each of those prohibitions would appear to apply to various incidents caught on video during Wednesday’s historical melee. Penalties under this section are a bit less steep than those for seditious conspiracy and rebellion or insurrection and top out at five yers per offense.

“The violence at our Nation’s Capitol Building is an intolerable attack on a fundamental institution of our democracy. From the outset, the Department of Justice has been working in close coordination with the Capitol Police and federal partners from the Interior Department, the Department of Homeland Security, and the National Guard, as well as the Metropolitan Police and other local authorities,” Rosen said Wednesday. “Earlier this afternoon, the Department of Justice sent hundreds of federal law enforcement officers and agents from the FBI, ATF, and the U.S. Marshals Service to assist the Capitol Police in addressing this unacceptable situation, and we intend to enforce the laws of our land.”

And there was also at least one U.S. Attorney in a position to do something about the violence who telegraphed plans to prosecute.