‘A Date Which Will Live in Infamy’: Congress Certifies Joe Biden’s Win After Pro-Trump Mob Was Quelled at Capitol 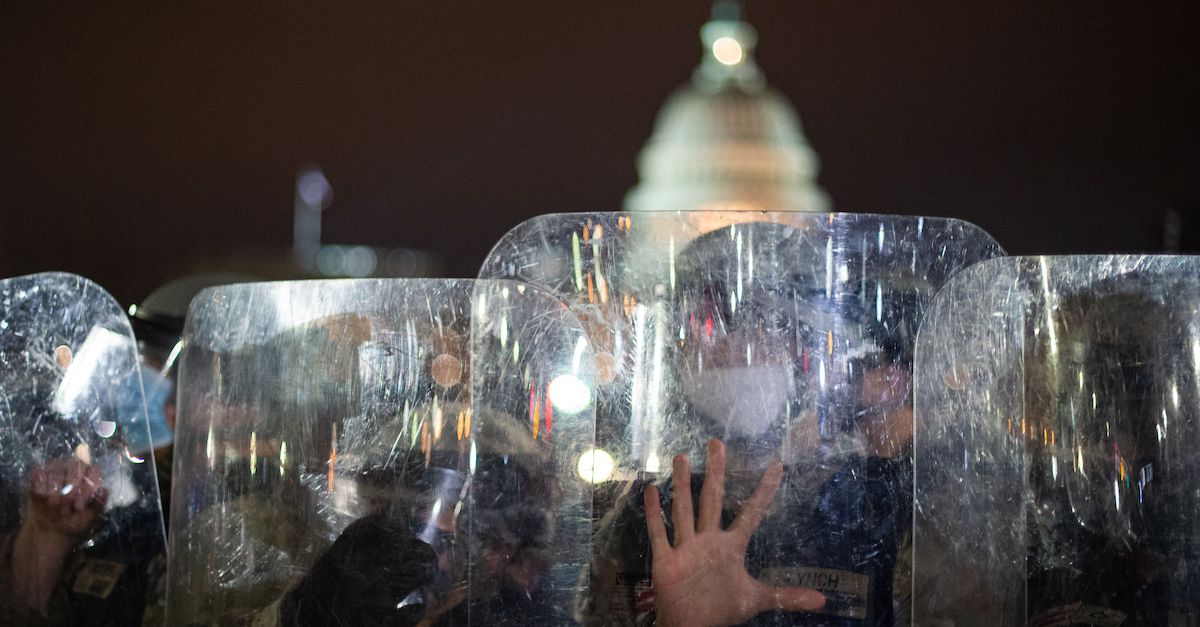 National Guard troops are seen behind shields as they clear a street from insurrectionists outside the Capitol building on January 6, 2021 in Washington, DC.

After the bombing of Pearl Harbor, Franklin Delano Roosevelt called it a “date which will live in infamy.” Soon-to-be Senate Majority Leader Chuck Schumer declared that those words would now apply to Jan. 6, when mobs—tied to extremist groups like the Proud Boys and goaded by the outgoing president—invaded the U.S. Capitol to overthrow the ceremony of democracy. Then, radical-right lawmakers dragged out baseless objections against President-elect Joe Biden’s election until deep into the following morning.

“It is very, very difficult to put into words what has transpired today,” Schumer said on Wednesday afternoon, several hours after the disruption of the congressional joint session by an insurrection.

“This will be a stain on our country not easily washed away,” Schumer added.

California Democratic Rep. Adam Schiff, reprising the type of soaring speeches he delivered to impeach outgoing President Donald Trump, also invoked immortal FDR words for the occasion: the Four Freedoms speech, a call for universal human rights in the shadow of the war against fascism.

“Every realist knows that the democratic way of life is at this moment being directly assailed in every part of the world—assailed either by arms, or by secret spreading of poisonous propaganda by those who seek to destroy unity and promote discord in nations that are still at peace,” Roosevelt intoned on Jan. 6, 1941, in a line Schiff recited for the occasion exactly 80 years and, because the proceedings stretched well beyond midnight, one day later.

“Violence never wins,” Pence had said when the proceedings started up again, following the riot that ended with ransacked offices of lawmakers, a broken window, a vandalized building and four dead. “Freedom wins.”

The Senate certified Biden’s Arizona win with only six defections: Senators Ted Cruz of Texas, Josh Hawley of Missouri, Cindy Hyde-Smith of Mississippi, John Kennedy of Louisiana, Roger Marshall of Kansas, and Tommy Tuberville of Alabama. Two others, Cynthia Lummis in Wyoming and Rick Scott of Florida, joined the baseless attack on Pennsylvania’s election. Their stunt had few friends, but several apologists, in the Senate, but radicalism ran rampant in the House GOP, where more than 138 Congress members objected to an election validated by every court that scrutinized it. Objections in other states like Michigan and Nevada could not find a Senate co-sponsor, and a similar process played on Pennsylvania, where Hawley precipitated another lengthy and futile debate that would drag on past 3:30 a.m. Eastern Time the following morning, when Biden and Vice President-elect Kamala Harris’s victories were reconfirmed. The vice president washed his hands of the affair on Wednesday, earning outgoing Trump’s scorn.

Trump had attacked Pence for refusing to unilaterally reject the certification, a power he did not have. Trump continued to attack his second-in-command on Twitter around the time that Capitol Police whisked Pence from the Senate chamber. Before the mobs breached the building, the atmosphere in the chambers was one of dissension, but senators resolved to set differences aside as the session resumed.

“If this election were overturned by mere allegations from the losing side, our democracy would enter a death spiral,” McConnell said. “We would never see the whole nation accept an election again.”

Like his fellow Democrat from New York, Sen. Cory Booker of New Jersey came prepared with a historical analogy for the day’s events: the War of 1812, where the British invasion led to the burning of the Capitol and the White House. The common line that Booker found in both events involved a cult of personality: one, a monarch in England, and the other, Trump.

“This time, we brought this hell upon ourselves,” Booker said.

Sen. Mitt Romney of Utah, the only member of his party to vote for Trump’s removal from office during impeachment, described himself as “shaken to the core” by the images from the U.S. Capitol broadcast around the world.

“We gather due to a selfish man’s injured pride,” he said. “What happened here today was an insurrection by the President of the United States.”

Sen. Kelly Loeffler, a Republican who lost her runoff election in Georgia to Rev. Raphael Warnock but still has not conceded, had planned to object to Biden’s win before pivoting to say that she could not proceed “in good conscience.”

Not all Republicans stepped away from the ledge: Sen. Josh Hawley, whose hometown paper in Kansas accused him of having blood on his hands for the Capitol “coup attempt,” refused to back down from his request for a political audit that would second-guess the unanimous verdicts of dozens recounts, audits, and lawsuits that have reinforced President-elect Joe Biden’s victory at every turn.

But Hawley was part of a vanishing minority in the Senate, though he still had some allies in a House thronging with Trump’s loyalists.

Several hours earlier, the joint session of Congress—usually a ceremonial opening of envelopes and counting of certified votes had been a very different scene. Republican Congressman Steve Scalise of Louisiana, without a trace of irony, justified his objection with his desire to avoid election via proverbial backroom dealing.

“It was an open process, by the way, not behind closed doors in a smoke-filled room where somebody might want to bully a Secretary of State to a different version that might benefit them or their party,” Scalise said.

On Saturday, Trump appeared to extort Georgia Secretary of State Brad Raffensperger with the threat of criminal prosecution if he did not “find” 11,780 votes that would have flipped the state in his favor. Trump lied about the conversation the next morning on Twitter, leading Raffensperger’s office to leak a recording of the more than hour-long conversation to the Washington Post, which published it.

It was not the first time Trump tried to bully, entice, cajole or threaten state officials to overturn a race that he lost.

Democratic Sen. Dick Durbin of Illinois noted in his speech that this the marauding throngs that stormed Congress did not arrive unprompted, either.

“Did this mob spring spontaneously upon America?” Durbin asked.

On New Year’s Day, Trump tweeted out to his supporters that they should attend a “BIG Protest Rally” in Washington, D.C., where they were greeted by him and his lawyer Rudy Giuliani, who told them to brace for “trial by combat.”

“We saw that beast today roaming the halls,” Durbin today. “Let’s not invite it back.”

As proceedings dragged on into the early morning hours of Thursday, a Republican repeatedly shouted objections as Democratic Rep. Conor Lamb described his post-election conspiracy theories as “lies.”

“The truth hurts,” Lamb replied, before adding: “We want this government to work more than they want it to fail.”

“It is time for America to heal,” the Maryland Democrat added.

More than 14 hours after proceedings began—and disrupted by a rebellion against the nation’s constitutional republic—Biden had his victory reaffirmed, and U.S. democracy lived another day. Suspended by Twitter, Trump released a statement through his spokesman Dan Scavino appearing to commit to an “orderly transition.” He offered no congratulations to his successor and repeated the same election-fraud deceptions, with less than two weeks left in his presidency.