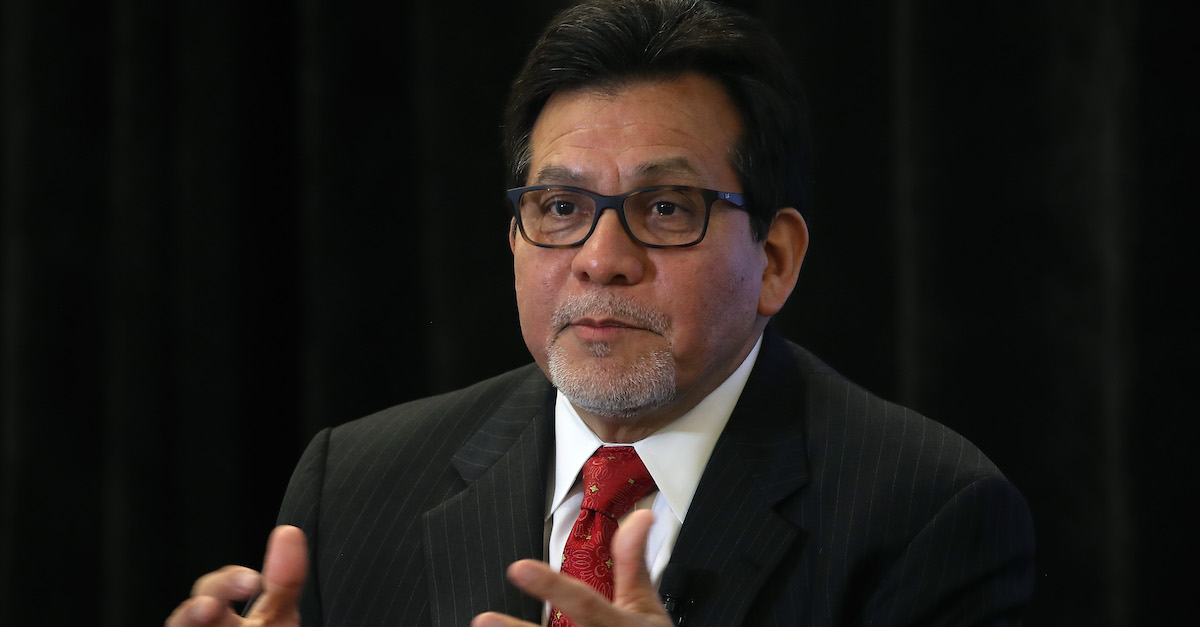 Former U.S. Attorney General Alberto Gonzales, who served during the George W. Bush presidency, said Friday on SiriusXM’s The Dan Abrams Show that the Trump campaign and the president should consider backing up election fraud claims with proof.

Law&Crime founder and ABC News Chief Legal Analyst Dan Abrams, who has been vocal about the Trump campaign’s need for actual evidence if it hopes to get anywhere in court, asked Gonzales for his thoughts on the legal landscape. Gonzales said that, although he hasn’t read all of the Trump campaign filings, allegations of this magnitude ought to be backed up by proof.

“Do you see, based on, you know, what the filings have been thus far, what the president has said publicly, do you see a legal route for President Trump?” Abrams asked.

Gonzales said that he hasn’t read all of the filings, but said President Donald Trump has a “very difficult” challenge to overcome given the number of states Joe Biden is currently leading in (namely, Pennsylvania, Georgia, Arizona, and Nevada).

Pennsylvania would secure Biden the 270 electoral votes needed to win regardless of what happens in the other states. Georgia appears destined for a recount that could be rendered moot. Two Trump campaign lawsuits were tossed on Thursday due to a lack of evidence. Another one filed by Republicans seeking to stop ballot counting in Detroit was rejected on Friday. The judge said there was “no evidence” of wrongdoing. Pennsylvania Republicans’ latest effort to get the U.S. Supreme Court involved was also not looked upon favorably by legal experts.

A lawsuit in Nevada has also been marred by highly dubious allegations.

Gonzales said that the president’s team needs a more coherent and targeted strategy that includes some proof.

“I’ve heard of some of the public comments,” he said, of the president’s remarks. “It seems to me to be more effective if you’re going to make a claim of fraud to set aside votes, um, you’d be better off providing some proof, quite frankly, maybe, maybe the proof is in the filings. I don’t know.” Gonzales said he suspected that more would have been said publicly “about the content of the charge” if there really was something substantive backing the president’s claims.

I had such a big lead in all of these states late into election night, only to see the leads miraculously disappear as the days went by. Perhaps these leads will return as our legal proceedings move forward!

Gonzales also said that, even if there is some truth to a claim, the claim has to be significant enough to matter and make a difference in the end. Gonzales said the president and his campaign are entitled to challenge certain ballots and to demand that only legitimate votes should be counted. But he noted that he “just [hasn’t] seen much evidence” of “illegitimate votes”—and “certainly not of the scale to make a difference with respect to the outcome within certain of these states.”

Abrams agreed that “as of right now, there hasn’t been any evidence presented of any kind of systemic fraud in the legal proceedings.”

Gonzales pointed out that one challenge that the Trump campaign explored was in Georgia. That case, which was thrown out because it produced no evidence of fraud, targeted only 53 ballots. The case was also filed in a state where there is a Republican governor and Republican secretary of state.

Gonzales said it was implausible that Gov. Brian Kemp and Secretary Brad Raffensperger would stand idly by as systemic and highly impactful election-altering fraud cost their party the presidency. While declining to call President Trump’s fraud allegations “irresponsible,” Gonzales said he is “not sure it’s the wise way to proceed forward, quite frankly.”

“And I think it also ignores some basic realities, for example, I mean, is he saying that, uh, the Republican governor and the Republican secretary of state in Georgia is allowing these kind of shenanigans as some have described it to occur? I  would find that hard to believe,” he said. Gonzales also argued that we are forging ahead into some uncharted waters.

“I think this is fairly new territory, this kind of a dispute and, you know, we’ll just have to wait and see, but ultimately that is going to be driven by the wishes and desires of the president, President Trump,” Gonzales said of potential litigation to come.

Gonzales also took some parting shots at the Department of Justice, though he opted not to criticize Attorney General Bill Barr by name.

Abrams asked if the Department of Justice should get involved in election disputes, as some of President Trump’s supporters have suggested.

Gonzales said the DOJ “should not be involved at this point.” One reason why? The DOJ’s reputation has taken a hit over the “past few years.”

“These are matters being litigated at the state level. And I, I guess one could make, make the argument that, uh, you know, this involves a federal office and, you know, the highest office in the land and therefore there’s a federal interest involved here. I would be very careful about interjecting the Department of Justice in an election dispute within various state jurisdictions, particularly given—I think that it’s, I’m sad to say this, but I think the department has been questioned.”

Gonzales said, without getting into specifics, that “certain actions taken by the department” have “hurt the reputation” of the DOJ.

“And I guess if I were advising the attorney general, I would say, let’s be careful here,” Gonzales said, noting that using the DOJ to run “a fool’s errand” to possibly save the “sinking ship” could do lasting damage to an already damaged DOJ.

“I think, as the attorney general, you have a responsibility to protect the reputation, the morale, the integrity of the Department of Justice,” he said.

Gonzales said he didn’t feel comfortable criticizing a sitting attorney general since he himself probably wouldn’t have appreciated being second-guessed by a predecessor.

At the same time, Gonzales said it was important, when you see a controversial story about the DOJ’s actions, to know what you don’t know.

“A very valuable lesson that I’ve learned, and that is, uh, oftentimes you don’t know what you don’t know and decisions are made at, at these levels, by the president, by cabinet secretaries, uh, with information that you don’t have that you and I don’t have, and that we may never have,” Gonzales said. “And so I—there may be a decision made at that department that I look at how it’s reported and I questioned, well, why is that? Or how can that be? And I remind myself that decision is based upon information I don’t have. And if I had that same information, I might make the same decision. I don’t know, maybe I wouldn’t, but it’s, I think it’s very important for your listeners to always remember: I don’t know what I don’t know.”