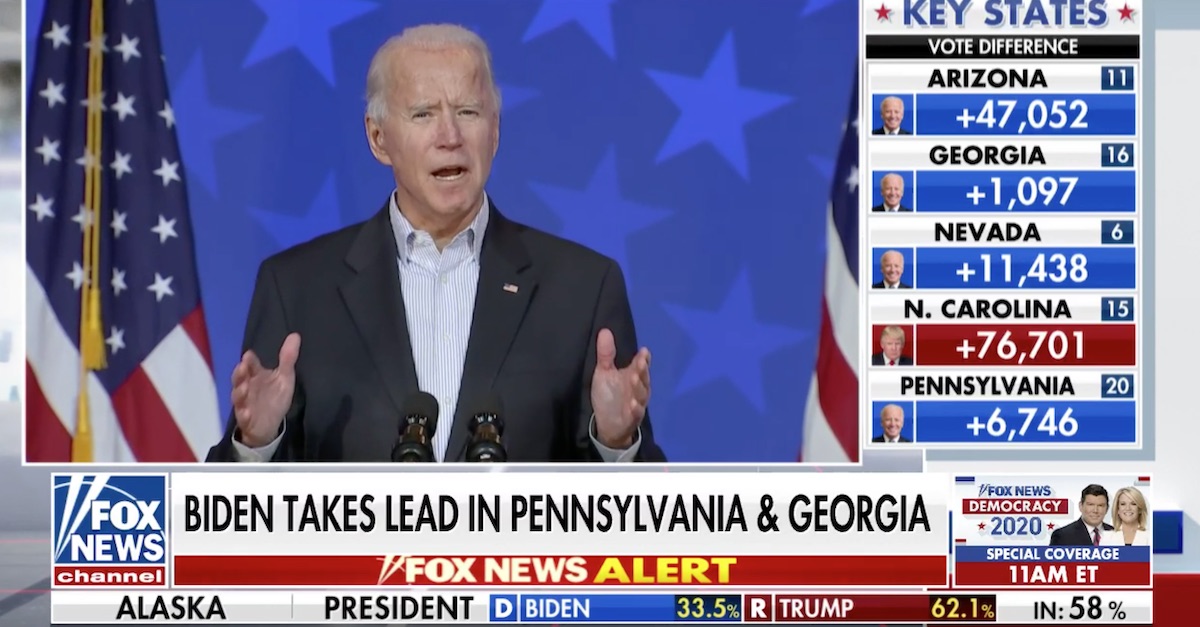 UPDATE: Shortly after this story was published, Georgia Secretary of State Brad Raffensperger, a Republican, said that the narrow margin here means there will inevitably be a recount in Georgia.

Secretary Brad Raffensperger: "There will be a recount in Georgia." pic.twitter.com/V3hGnHxsHF

You should be prepared for this to take a while:

I just asked if we will even know by end of the month who won the Presidency in Georgia? Answer: must do an audit, then counties must certify the election, then state must certify – only THEN will we have a recount – that could take about week on its own. pic.twitter.com/iSJNgjQ1tU

It’s Friday morning and it’s not looking good for President Donald Trump’s re-election campaign. Sensing the Georgia was slipping away from a Republican presidential candidate for the first time since 1992, when Bill Clinton won the Peach State, the Trump campaign threatened to pursue a recount in the state.

As of right now, Joe Biden has a narrow lead in Georgia. One Trump campaign legal effort there fell very flat on Thursday, but the campaign is evidently not going down without a fight.

A statement from the Trump campaign: "this election is not over." pic.twitter.com/92pV9EmBbM

Trump campaign general counsel Matt Morgan said the election isn’t over yet, saying “Georgia is headed for a recount, where we are confident we will find ballots improperly harvested, and where President Trump will ultimately prevail.”

From here, the campaign actually blamed Fox News for the perception that Trump has all-but lost the 2020 election (Decision Desk HQ called the election for Biden on Friday morning; CNN and the Associated Press have yet to call the race).

Although Georgia may not even matter at this point for Trump’s re-election chances (see: Pennsylvania, Arizona and Nevada), here’s what you should know about recounts under Georgia law.

In Georgia, a candidate is only allowed to request a recount if the ultimate margin separating them from their nearest challenger is less than”one-half of 1 percent of the total votes cast.” This may very well be the case.

Similar to both Nevada and Michigan, the time frame for initiating the recount process requires quick legal action; a requesting party has “two business days following the certification of the election results” to file the paperwork necessary and must be “made in writing by the losing candidate.”

“If the office sought is a federal or state office voted upon by the electors of more than one county, the request shall be made to the Secretary of State who shall direct that the recount be performed in all counties in which electors voted for such office and notify the superintendents of the several counties involved of the request,” the statute notes.

Additionally, a candidate who feels that they have been wronged by the process has another avenue to request a recount. Per the statute:

Any other provision of this Code section to the contrary notwithstanding, a candidate for a federal or state office voted upon by the electors of more than one county may petition the Secretary of State for a recount or recanvass of votes, as appropriate, when it appears that a discrepancy or error, although not apparent on the face of the returns, has been made.

Unlike Michigan, a recount requested due to an alleged error is not simply available to anyone complaining about unspecified fraud. Here, the discretion to initiate such a recount rests with the Georgia’s Secretary of State Brad Raffensperger, a Republican:

The petition pursuant to this Code section shall be in writing and signed by the person or persons requesting the recount or recanvass. A petition shall set forth the discrepancies or errors and any evidence in support of the petitioner’s request for a recount or recanvass and shall be verified. The Secretary of State may require the petitioner or other persons to furnish additional information concerning the apparent discrepancies or errors in the counting or canvassing of votes.

Under Georgia’s election rules, recounts are conducted by feeding ballots into optical scanners. Only a court order can provide a hand recount.

The Trump campaign has also said it wants a recount in Wisconsin.