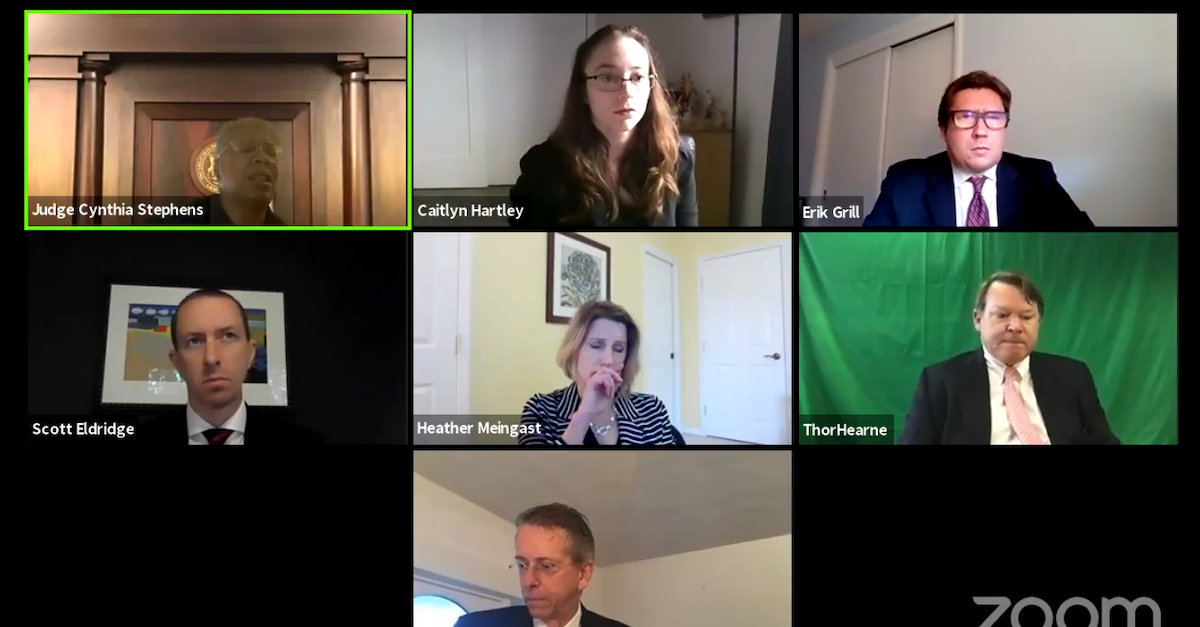 In President Donald Trump’s second loss in court in a single day, a Michigan judge rejected the Trump campaign’s bid to stop counting ballots without their inspectors present. The judge scoffed at plaintiffs’ “hearsay” evidence that a lawyer said she heard from a poll worker regarding dates supposedly changed on ballots.

“‘I heard someone else say something,'” Michigan Judge Cynthia Stephens said on Thursday, summing up an affidavit submitted by the Trump campaign. “Tell me how that is not hearsay. Come on now!”

An attorney for the Democratic National Committee, seeking to intervene in the case, argued that the Trump campaign lacked factual support.

“No evidence in the record would allow the court to find a likelihood of success on the merits,” the DNC’s counsel Kevin Hamilton said in court.

“All of this is really an effort to stop the counting of ballots by Michigan voters,” he added later.

Today’s hearing landed in the Michigan Court of Claims after the Trump campaign and Michigan voter Eric Ostergren alleged in a lawsuit that they were excluded from the counting board during the absentee voter ballot review process.

Filed against Michigan’s Democratic Secretary of State Jocelyn Benson, the complaint alleged that Ostergren had been denied the opportunity to watch videotapes of votes being counted in violation of the state constitution’s right to equal protection under the law and “purity of elections.” Trump wanted an order telling the secretary to stop counting absentee ballots until an inspector from each party was present.

Hamilton, the attorney for the Democrats, noted that there is no right to video surveillance of voters casting ballots.

“Plaintiffs attempt to ‘unring’ a bell in this case. They ask this court to halt the counting and processing of absent voter ballots throughout the state of Michigan,” her assistant attorney general Heather Meingast said in the state’s 20-page opposition papers. “But the tally of unofficial county results is complete. This means that absent voter ballots have already been processed and counted in the State of Michigan. The relief they seek can no longer be granted. And regardless, plaintiffs’ substantive claims are entirely without merit, if not frivolous.”

The day after her ruling from the bench, Judge Stephens issued a written opinion slamming the Trump campaign’s case as based on “inadmissible hearsay within hearsay.”

The double-hearsay in question came from Jessica Connarn, a designated poll watcher whose affidavit the campaign included to bolster its arguments, but her sworn testimony about scuttlebutt from an unidentified person failed to impress the judge.

“The assertion that Connarn was informed by an unknown individual what ‘other hired poll workers at her table’ had been told is inadmissible hearsay within hearsay, and plaintiffs have provided no hearsay exception for either level of hearsay that would warrant consideration of the evidence,” Connarn wrote.

The campaign’s counsel noted that the mystery poll watcher who interacted with Connarn supposedly handed her a note to support the tale, but this too fell far short of a smoking gun.

“The note—which is vague and equivocal—is likewise hearsay,” the ruling states. “And again, plaintiffs have not presented an argument as to why the Court could consider the same, given the general prohibitions against hearsay evidence.”

Read her opinion and order here:

You can watch the proceedings here: