‘Wait for the 6th When We Are All in DC to Insurrection’: New Communications Indicate Coordination Between Oath Keepers, Proud Boys, and Three-Percenters 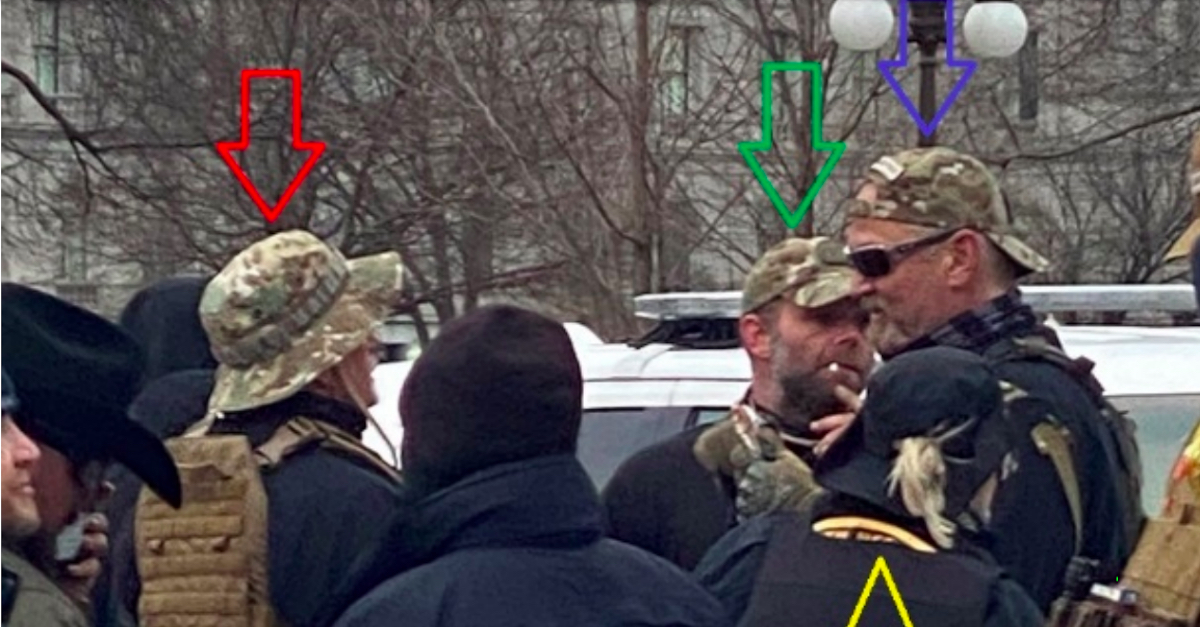 Kelly Meggs and several other Oath Keepers gathered at the Capitol on Jan. 6.

Prosecutors in Washington, D.C. on Tuesday evening released a slew of communications indicating that three para-military militia groups had formed a coordinated “alliance” in the weeks ahead of the Jan. 6 Capitol siege — discussing strategy and use of force tactics as they prepared to “get shit kicked off” following the “Save the Steal” rally.

The communications were revealed in court documents opposing leader of the Florida Oath Keepers Kelly Meggs’s latest request to be released from jail on bond in advance of his criminal trial.

In written communications with several individuals across multiple platforms, the Oath Keeper made clear that he had been in close contact with leaders of the Proud Boys and Three-Percenters militia groups.

“This week I organized an alliance between Oath Keepers, Florida 3%ers, and Proud Boys,” Meggs wrote in a Dec. 19 Facebook message to an unknown person. “We have decided to work together and shut this shit down.”

Days later, he discussed specific numbers and attack strategy the groups planned to use on Jan. 6.

“We will have at least 50-100 OK [Oath Keepers] there,” Meggs wrote on Dec. 22. “Plus we have made contact with PB [Proud Boys] and they always have a big group. Force multiplier.”

He added, “I figure we could splinter off the main group of PB and come up behind them. Fucking crush them for good,” and “We can hang for a while they’ll see one group then we all fall to back of the pack and peel off. We catch them in the middle…game over.”

Meggs and nine other Oath Keepers were charged with, among other counts, conspiring to prevent Congress from ratifying Joe Biden’s Electoral College victory. Though coordination between the militia groups has been the subject of problematic speculation, the messages in Tuesday’s filing are the first tangible evidence to support the theory.

In asking U.S. District Judge Amit Mehta to reconsider allowing Meggs to post bond, Meggs’ attorneys asserted that the Oath Keeper was only in D.C. to help “protect” police officers, but prosecutors say his messages unequivocally undercut that claim.

Meggs on Dec. 26 told an associate that the Oath Keepers were “called” to D.C. because Donald Trump was preparing to invoke the Insurrection Act and later emphasized that Jan. 6 would be much more than a mere rally.

“Trumps staying in, he’s gonna use the emergency broadcast system on cell phones to broadcast to the American people. Then he will claim the insurrection act,” Meggs wrote.

Asked when that would happen, Meggs said it would be the following week, adding, “Then wait for the 6th when we are all in DC to insurrection.”

Meggs again discussed “insurrection” with an unknown associate on Jan. 3, apparently believing that Mike Pence publicly agreeing to entertain challenges to Congress’s certification of votes was a call to arms.

“Insurrection act should be why [Trump] is presenting to America, now [that] Pence announced he is going to allow the evidence to be presented to Congress. That checks all the boxes. I think this is why we were called there. Anything less would be a terrible mistake. The natives are very restless,” Meggs wrote.