Ex-Acting U.S. Attorney Was Referred for DOJ Probe After Talking About Sedition During ‘60 Minutes’ Interview 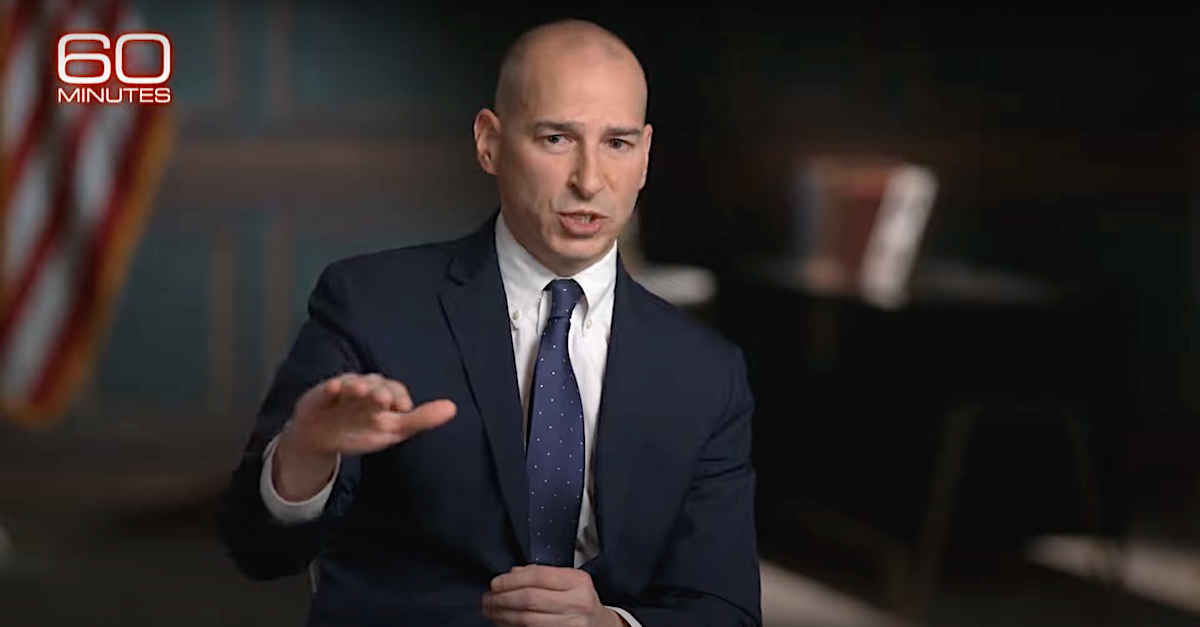 Former acting U.S. Attorney in Washington, D.C. Michael Sherwin has been referred to a Department of Justice ethics office for speaking to the television show 60 Minutes about cases involving the U.S. Capitol Siege of Jan. 6, prosecutors revealed in an emergency phone hearing Tuesday involving the cases of 10 alleged members of the Oath Keepers militia.

Attorneys for most if not all of the defendants were present for the remote hearing, as were a bevy of federal prosecutors and their supervisors.

Calling the issue “emergent,” Judge Amit P. Mehta, a Barack Obama appointee, said the “lengthy” interview with Sherwin which aired Sunday on the long-running and popular news magazine show was a problem because Sherwin “expressly referred to this case” and later, without naming this case specifically, “speculated about the additional charges,” including “sedition.”

Judge Mehta was similarly concerned about a Monday piece in The New York Times which directly suggested that prosecutors were evaluating sedition charges in the case against the 10 alleged Oath Keepers. That report cited anonymous sources.

“I was surprised to say the least seeing Mr. Sherwin sitting for an interview in a pending case,” Mehta said. he called the matter “troubling” and said he hoped the Department of Justice was looking into the matter.

“Let me be clear: these defendants are entitled to a fair trial, not one that’s conducted in the media,” the judge said. “These types of statements in the media have the potential for effecting the jury pool . . . the government should know better.”

“If there are further federal comments,” the judge added, “I will not hesitate to consider a gag order” or sanctions.

He noted that he intended to “vigorously” enforce Local Criminal Rule 57.7, which reads in part:

It is the duty of the lawyer or law firm not to release or authorize the release of information or opinion which a reasonable person would expect to be disseminated by means of public communication, in connection with pending or imminent criminal litigation with which the lawyer or the law firm is associated, if there is a reasonable likelihood that such dissemination will interfere with a fair trial or otherwise prejudice the due administration of justice.

The degree to which such statements actually cause prejudice to criminal defendants is hotly debated in legal ethics circles. Leaks and statements to the press are not uncommon at the state trial court level but are relatively rare at the federal level. Sit-down interviews, such as Sherwin’s comments to 60 Minutes, are even more rare.

“I know none of your are responsible for the public statements,” Judge Mehta said to the assembled cohort of prosecutors. Rather he was interested in learning whether the DOJ was handling the matter.

John Crabb, the head of the criminal division within the Washington, D.C. U.S. Attorney’s Office, said “the department has already taken steps” to deal with Sherwin’s interview.

“As far as we can determine . . . those rules and procedures were not complied with,” Crabb said. He told Judge Mehta that the matters involving Sherwin’s interview had been referred to the Department of Justice’s Office of Professional Responsibility.

“With respect to the other media issue with the New York Times . . . we have no reason to believe anyone on the trial team was responsible for those disclosures,” Crabb added. He also said that matter had been referred for internal review.

Judge Mehta asked the attorneys to help him “understand what guardrails are in place” to prevent future leaks.

Attorney David A. Wilson, who represents defendants Connie Meggs and Kelly Meggs, said he was “okay” at this point with the discussion as it progressed but suggested he, too, would intervene if further leaks occurred.

Another defense attorney said his “client is extremely concerned” about the leaks and hoped the Department of Justice would clean up its act.

Attorney Stephen F. Brennwald, who represents defendant Bennie Alvin Parker, said he, too, “was contacted multiple times by 60 Minutes to do interviews” as well as by other networks. “The appropriate answer we’ve given is ‘we have no comment at this point.'”

Defense attorney Carmen D. Hernandez, one of several defense attorneys who did speak to The New York Times in response to the interview and the leaks, told the judge she felt it necessary to respond given the prejudice the DOJ’s comments caused to her client.  Hernandez referenced U.S. Supreme Court cases on point. Additionally, though she did not mention them, the ethics rules of many states explicitly allow attorneys to respond to critical statements by opposing counsel which harm their clients’ reputations in the press.

“It is not surprising that defense counsel may be moved to respond publicly as well — that’s the situation we all want to avoid here,” he added.