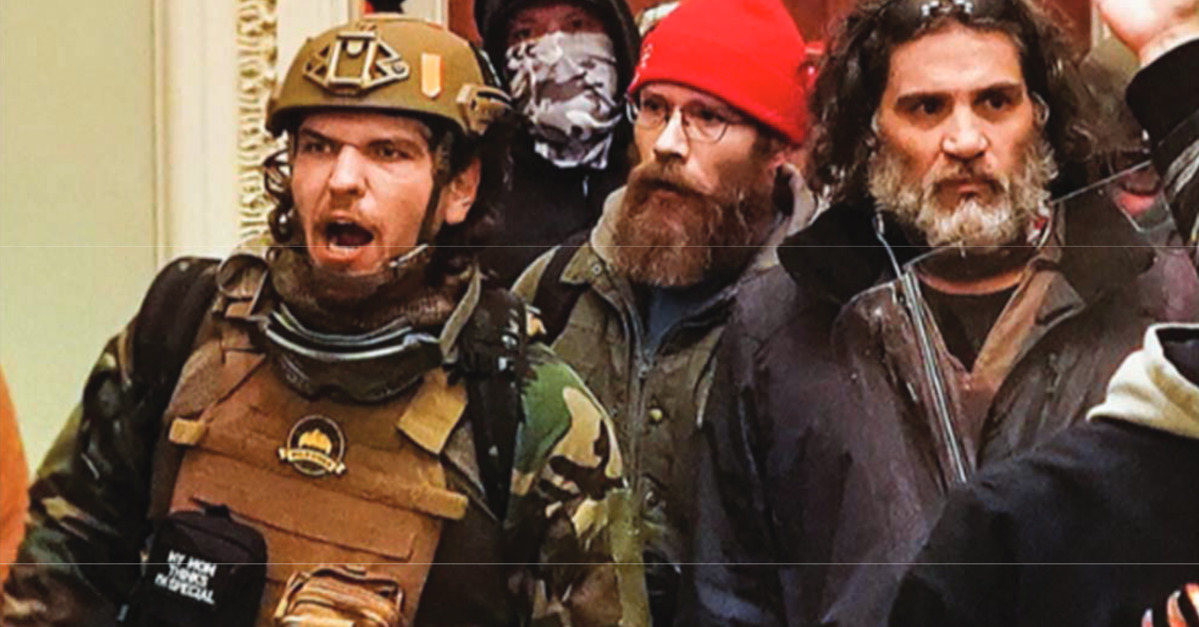 Robert Gieswein, 24, was arrested and charged earlier this week over his participation in the Jan. 6 siege of the U.S. Capitol Complex. According to the FBI, the Colorado resident sprayed law enforcement with an “unidentified substance” and “brandished a baseball bat” as he helped other rioters push through state security forces.

A recently unsealed criminal complaint alleges that Gieswein, who was indicted on Wednesday and “appears to be affiliated with the radical militia group known as the Three Percenters,” was identified largely on the strength of his own social media posts and publicly-available video footage and photos of the failed, pro-Trump insurrection.

Notably, multiple photographs included in the affidavit show a man in military fatigues alleged to be Gieswein wearing a black pouch emblazoned with the phrase: “My Mom Thinks I’m Special.”

“Gieswein has posted multiple pictures on his Facebook profile in which [he] flashes hand signs commonly used by the Three Percenters, while posing in front of a Three Percenters flag with others wearing clothing bearing Three Percenters logos,” the lightly redacted affidavit claims.

The unnamed FBI agent who authored the complaint claims that they ascertained Gieswein’s identity by comparing various media of the Capitol attack with his social media accounts as well as his Colorado driver’s license photo.

“A still photograph taken outside the Capitol shows Gieswein helping a crowd of people life and force a temporary barrier against a crowd of U.S. Capitol Police officers,” the court documents reviewed by Law&Crime explain.

“Another video captures Gieswein forcibly enter the Capitol through a broken window,” the affidavit continues. “Gieswein observes and encourages other rioters as they strike a window–first with a wooden board, and then with a stolen plastic law enforcement shield–until it breaks. The rioters, including Gieswein, then climb through the window into the Capitol. As Gieswein scrambles up into the building, the baseball bat is visible in his hand.”

The FBI’s court filing also cites a media interview with Gieswein from Jan. 5 in which he appears to describe his belief in an antisemitic conspiracy theory whereby “the Rothschilds and Rockefellers” have taken over the United States by purchasing elected officials like “[Nancy] Pelosi” and “the Clintons” among others.

“What we need to do is, we need to get the corrupt politicians that have been in office for 50-60 years, that have been destroying our country and selling it to the Middle East and Israel, out of office and they need to be imprisoned,” the man identified as Gieswein says.

If convicted as charged, the alleged militia member faces up to 53 years in prison.