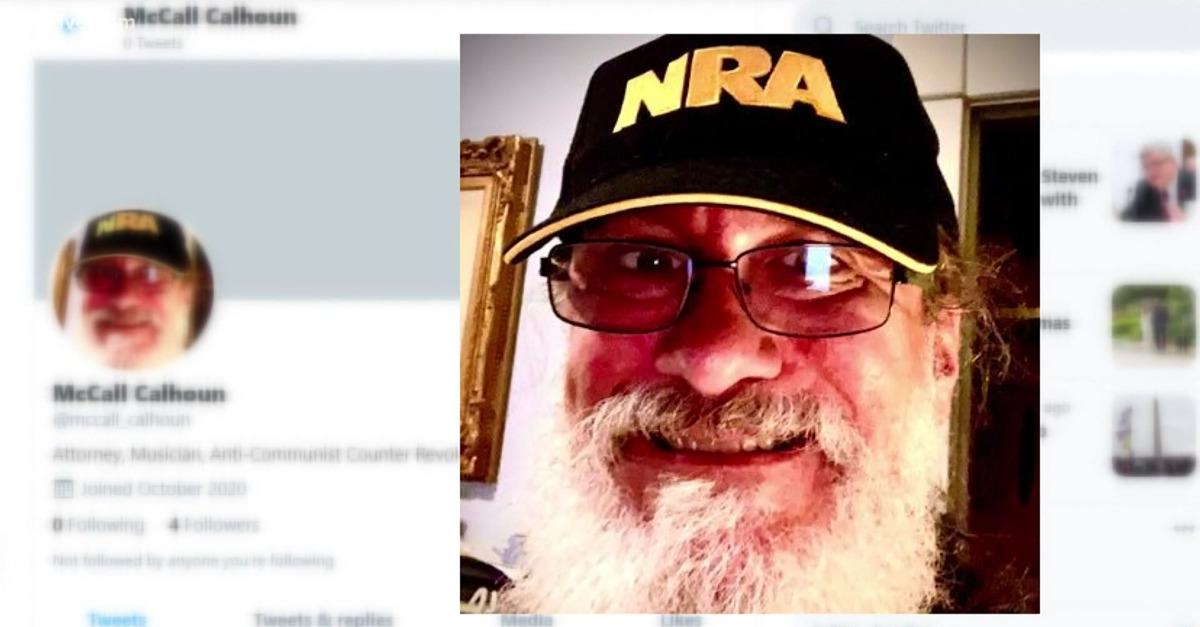 Georgia attorney William McCall Calhoun Jr. previously expressed no uncertain amount of pride for taking part in the Jan. 6 attack on the U.S. Capitol Complex. As a judge considered his release on Tuesday, however, Calhoun essayed a different note altogether.

“If I had to do it over again, I would not have gone into the Capitol,” he told U.S. District Judge Dabney L. Friedrich. “I know that I messed up doing that. I apologize for being difficult.”

The judge ultimately okayed Calhoun’s bail request but not before the defendant made a remark that very well could have tanked his second bid for pre-trial release.

“I know my friends are probably going to want to take me out tonight to buy me a steak and a glass of wine,” the admitted participant in the siege of Capitol Hill said near the end of the hearing. Luckily for him, the court was largely receptive and accommodating.

As a federal judge prepares to provide for pretrial release of Jan. 6 rioter William Calhoun, over prosecutors’ objeciton, Calhoun interjects to ask if he can drink:

“I know my friends are probably going to want to take me out tonight to buy me a steak and a glass of wine.’

In the end, the libationary ask didn’t really matter.

Over the objection of federal prosecutors, Calhoun was granted bail with relatively lax conditions. After the government pushed for internet monitoring provisions, the defense pleaded that such a regime would not be conducive to attorney-client privilege. The judge gave in. That request transformed into a proposal that Calhoun steer clear of all social media—that he even refrain from reading the news.

According to Inner City Press, Calhoun protested that sites like YouTube aren’t strictly social media because they contain how-to videos. After a bit more deliberation, the court, the government and the defense settled on a more narrowly-tailored solution: a full-on posting ban. Calhoun will not have his internet use monitored and is not barred from visiting certain websites, he simply cannot send his thoughts out into the semi-public ether of online forums or blogs.

Calhoun: I think Steve Bannon’s channel is on YouTube, and Rumble. Is that social media or news?
They have arrived at a “no posting” condition, saying it could be re-visited.

The posting prohibition is salient in Calhoun’s case.

Judge Friedrich noted that the defendant’s posts, previously marshaled and cited in service of denying his first bail request by the government, were “deeply disturbing.”

Judge will release Calhoun, says his social media posts are “deeply disturbing” but that he did not engage in violence and is not a risk of flight/obstruction – he has a “long history of compliance with court orders as a criminal defense attorney” https://t.co/9FMoqZikv0

In one post from his late January initial appearance, Calhoun wrote of his desire to place Black Lives Matter protesters in “body bags.” He said he wanted racial justice advocates “stacked up high.”

In another post, apparently telegraphing his desire to honor Tiffany Trump, Calhoun promised “headshots” for certain members of the media who were seen to be poking fun at her.

“God is on Trump’s side,” the veteran lawyer wrote in yet another post. “God is not on the Democrats’ side. And if patriots have to kill 60 million of these communists, it is God’s will.”

U.S. Magistrate Judge Charles H. Weigle agreed with the government the first time around. On Tuesday, U.S. District Judge Friedrich agreed with the defense’s earlier contention that “[w]ords do not equal action.”

Noting Calhoun’s lack of charges for having actually engaged in violence and his familiarity with court orders due to his years as an attorney, the court signed off on his release with GPS monitoring.

The once-proud but now demure defendant also predicted an end to his law practice, saying that no one would want to hire someone facing the charges he’s indicted for. Calhoun, effusively apologetic and offering the contrition of an artist, added that he was also a musician and would focus his attention on making money that way.

Calhoun: My law practice is over – no one is going to hire someone for a serious felony case someone who might be going to jail. I might re-open it later. I can play music and make money.
Judge: That’s aspirational. No need to broaden conditions at this point.

The court seemed to like the song it heard.