‘I’m the Guy Who Got You in This Building’: Capitol Rioter from Tennessee Who Identified Himself by Name on Video Has Been Arrested 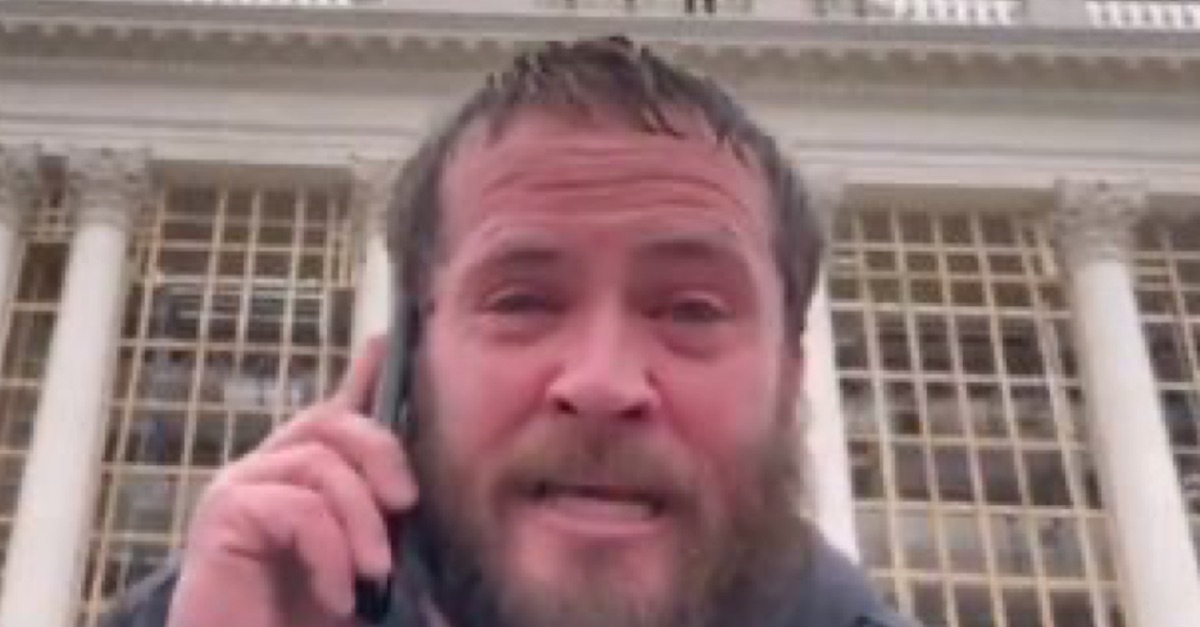 Now hundreds of cases into a criminal investigation seen as perhaps the biggest since 9/11, the FBI has added Presley to the pile and accused him of several federal offenses. The defendant was arrested last Friday in The Volunteer State and made his first court appearance on Monday.

The FBI statement of facts in Presley’s case says that the bureau “became aware” on Jan. 17 “of audio-video and image files, posted on social media and youtube, of one particular person, who was unlawfully inside and around the Capitol on January 6, 2021.” Authorities say that Presley identified himself by name and made “several” postings online, saying things like: “I stand on the top step of the Capitol”; “Yeah. I can hear you. Do you see me? I am on the top step of the fucking Capitol!”; “Stands is where we need to go. Do it!” “I’m the guy who got you in this building. Don’t take my word for it. Watch the video.”

The FBI included Getty Images of a man identified as the suspect grabbing the top of police officer’s riot shield and sitting on a bench inside the Capitol. 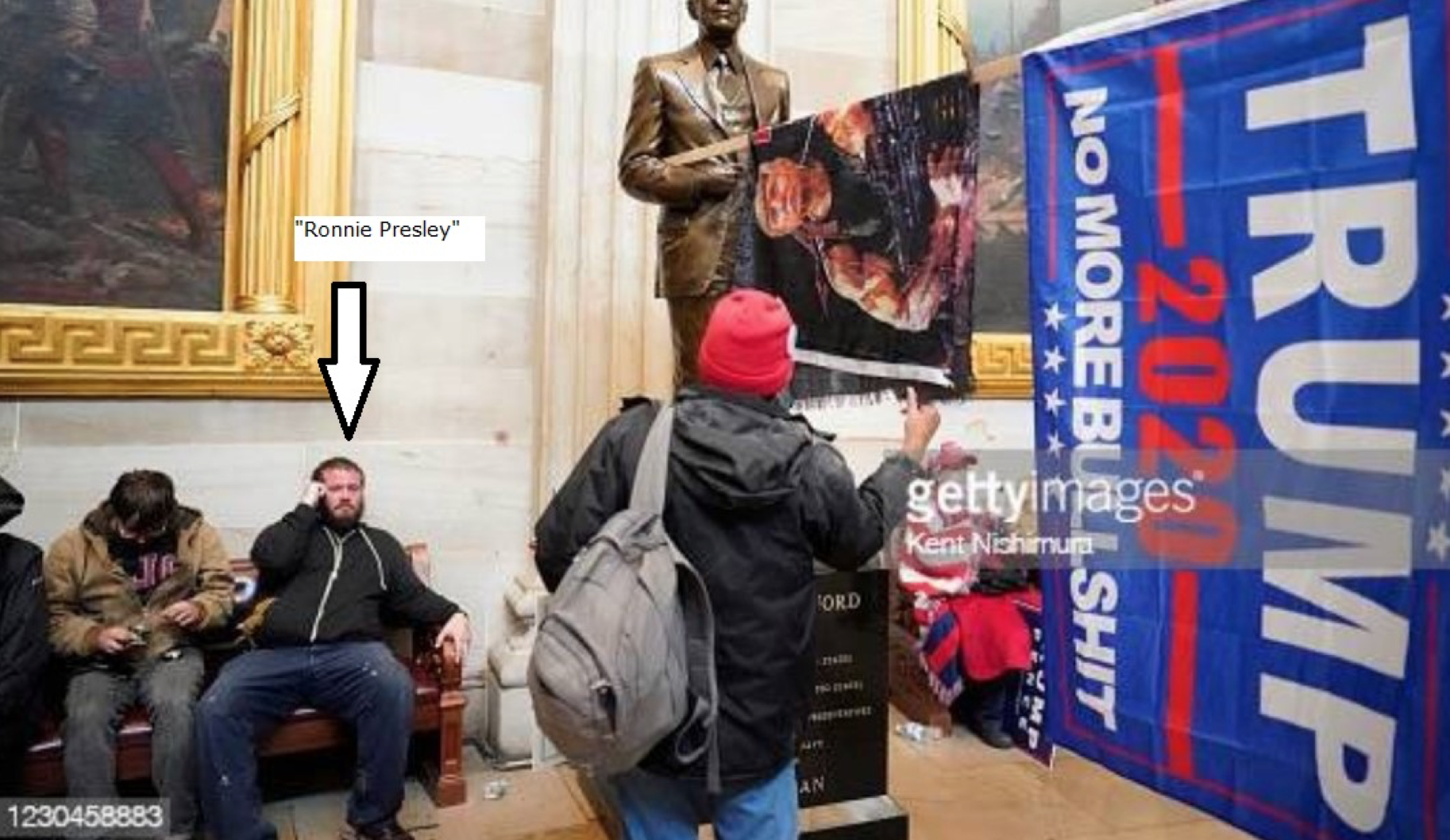 Some have identified Presley as the Capitol window-puncher, but the documents do not allege that he punched and broke a window with his bare hands. The Getty Image included in the complaint only claims to show Presley grabbing an officer’s riot shield as others attempt to unlawfully enter the building. 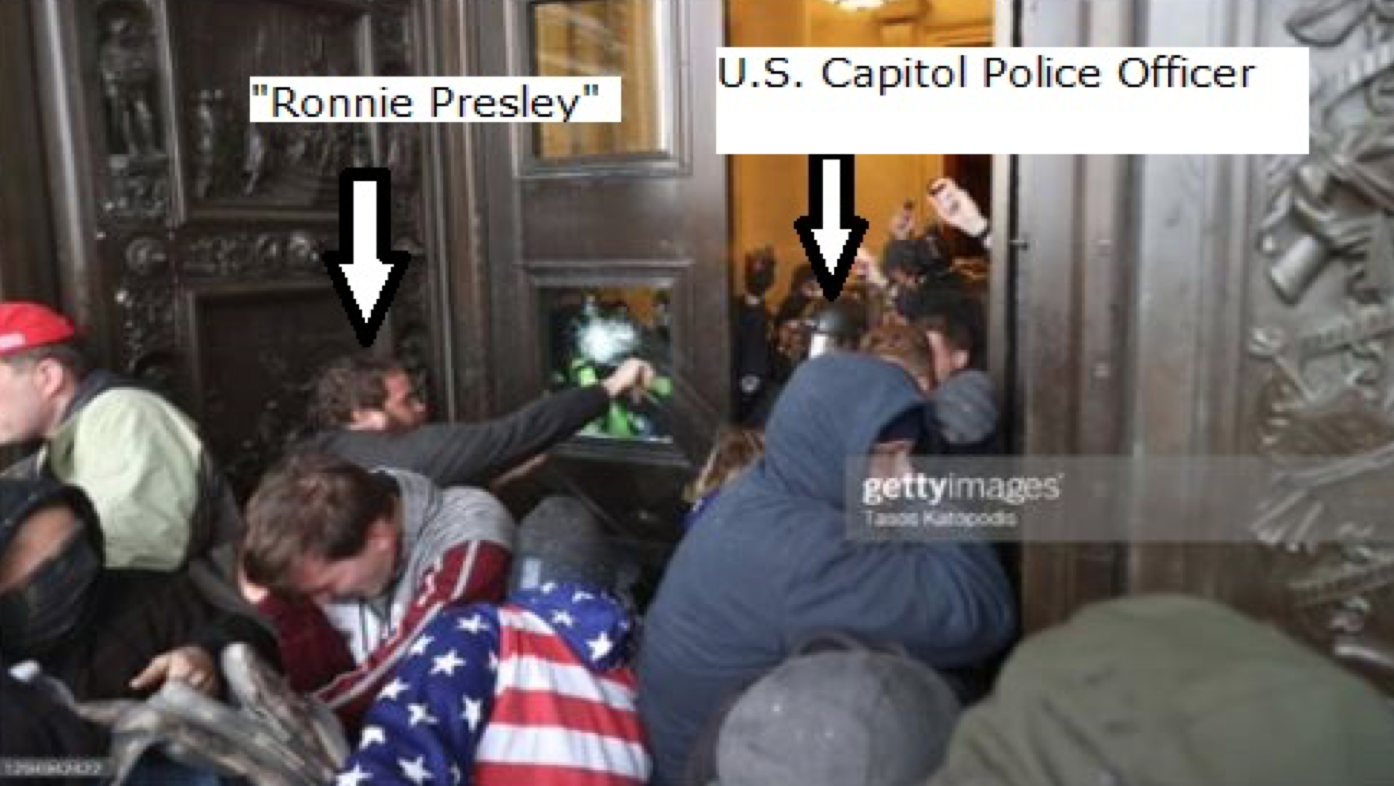 In any event, the feds used the evidence that Presley himself posted on the internet and showed that evidence to two people who know him. Those people, described as “close” to Presley, “confirmed to law enforcement that the person in the post identifying himself as ‘Ronnie Presley from Tennessee’ is in fact PRESLEY,” the FBI said.

Presley now faces charges for disorderly conduct, violent entry on Capitol grounds, obstruction of law enforcement during civil disorder, and knowingly entering or remaining in a restricted building or grounds without lawful authority.

Records show that Presley is being represented by federal public defender Dumaka Shabazz. A detention hearing has been set for 10:30 a.m. on Friday, March 12.