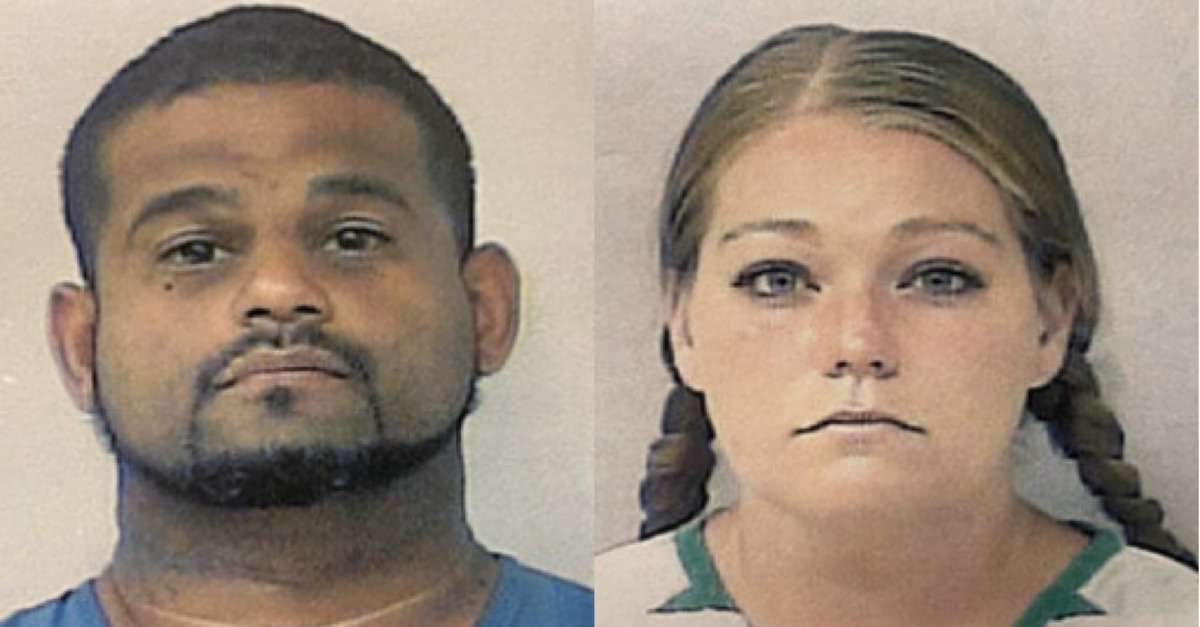 A Florida couple was arrested after allegedly imprisoning and starving three teenagers over the course of months–while the rest of the family apparently had ample food and space to share.

“There was a chain lock on the door to the bedroom shared by the three victims,” St. Lucie County Sheriff’s Office Chief Deputy Brian Hester said during a Tuesday press conference. “The three teenage victims weighed well below the accepted standard for their ages.”

According to local NBC affiliate WPTV, Oscar Torres, 40, and his wife, Brittany Kirschenhofer, 32, were arrested on Tuesday morning after a months-long investigation that began in early February of this year following a tipster’s anonymous complaint.

Torres and Kirschenhofer are currently being held without bond on three counts each of child abuse and neglect.

Authorities say there were a total of five children living in the house. The three teenagers have been identified as Torres’s biological children, and are said to be 16-year-old twins and a 17-year-old. The other two children, 6 years old and 9 years old, are Kirschenhofer’s biological children and were apparently treated “much, much differently than the other three children.”

One of the teenagers was discovered eating out of a trash can at one point, according to the police report, which allegedly resulted in their being starved for four days as punishment by the couple.

All of the teenagers, Hester said, were severely malnourished.

“Their hip bones were protruding from the pelvic area and bones along the spine were pushing through the skin of their back with the beginning stages of an open sore,” Hester said. “Medical evaluations all confirmed this condition was a direct result of malnutrition and required a feeding tube to try and gradually bring the child back to the appropriate level of nutrition for their age.”

One of the teenagers, police noted, only weighed 50 pounds and was discovered hallucinating, lacking verbal function and muscle control.

One girl was diagnosed with “drop foot,” which the police report describes as “a medical condition where she has lost the muscle control of the top of her feet, causing her not to be able to walk.”

According to a police interview with Torres, one of the girls lost control of her bowels and “started seeing people that weren’t actually there,” but he allegedly believed she was “faking it.”

Torres said Victim 2’s body stiffened up and she continued to say random things like “Up,” “Down,” “It’s the Pediasure, there’s worms in it,” and “[Redacted] pregnant.” Torres said she would just stare at the wall and did not make full conversation.

A medical professional cited in the report also noted that one of the children had “scabbed abrasions” on their body “consistent with crawling, falling and/or kneeling.”

While the criminal investigation necessarily took awhile, social services in the Sunshine State were proactive. Following the initial tip on Feb. 10, the Florida Department of Children and Families removed children from the home on Feb. 22. The three teenagers are now in the care of their biological mother; the other two children are being looked after by other relatives, police say.

The couple allegedly claimed this was a big misunderstanding and told police there was only a lock on the children’s bedroom door to keep the family’s dogs inside because the dogs are “escape artists.”

“The details of this case are disturbing and some of the most appalling examples of child neglect that I have heard in my 26 years in law enforcement,” Hester said, describing the details as “horrific.”

“One of the victims even admitted that they knew what was happening to them was wrong,” Hester added. “And they just couldn’t figure out a way to help their siblings out of this situation.”