Judge in Oath Keepers Jan. 6 Case Eliminates Potential Juror over Twitter Likes: The Trial ‘Has to Stand Up to Public Scrutiny’ 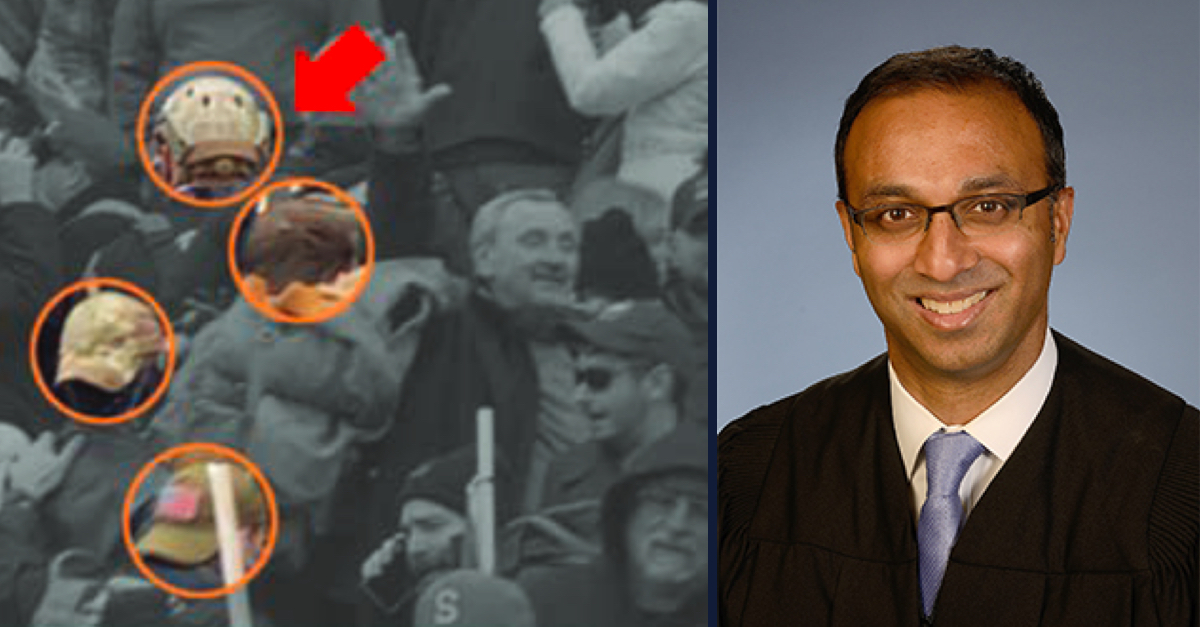 A federal judge disqualified one potential juror during the first half of the day on Wednesday during jury selection in a seditious conspiracy case against members of a right-wing militia-style group accused of plotting to bring weapons to the U.S. Capitol on Jan. 6.

U.S. District Judge Amit Mehta interviewed nine potential jurors on Wednesday morning. The judge, along with prosecutors and defense counsel, have already eliminated 39 would-be jurors out of a total 150 in the initial pool.  Twelve were dismissed out of 29 interviewed on Tuesday. Wednesday marked the second day of jury selection.

The jurors were being vetted for the trial of Stewart Rhodes, the founder of the Oath Keepers, and four co-defendants: Jessica Watkins, Kenneth Harrelson, Thomas Caldwell, and Kelly Meggs. The defendants are charged with conspiring to stop the peaceful transition of presidential power from Donald Trump to Joe Biden on Jan. 6, 2021, when scores of Trump supporters swarmed the Capitol and forced a halt to Congress’ certification of the Electoral College vote. According to prosecutors, the Oath Keepers defendants prepared a so-called “Quick Reaction Force” to potentially ferry a cache of weapons stored at a hotel in Virginia across the Potomac River to the Capitol.

Eight of those jurors were ultimately deemed qualified to sit on a jury, four of those over objections from defense lawyers. One juror, however, was kicked out of the jury pool due to his social media activity — specifically, items that he “liked” on Twitter.

“On Sept. 2, you retweeted a book [that said] MAGA Republicans are fascists,” Caldwell attorney David Fischer said. “Do you hold that viewpoint?

“No, that’s extreme,” the juror, a white male, responded, although he later said he does “see some parallels.”

“I have seem some parallels,” the juror repeated. “I wouldn’t go so far to say what you said.”

The juror added that he doesn’t “retweet” very often, but he does “like” Twitter posts fairly regularly.

“If someone came from a foreign country, how would you describe how you feel about Donald Trump supporters?” Caldwell attorney Fischer, who has taken the lead on questioning potential jurors about potential anti-Trump bias, asked.

He later indicated that he agreed with someone who posted on Twitter that modern-day Republicans are “nihilistic” and “contemptible.”

“It’s too general, but those descriptions do apply to certain elements of the Republican party,” the juror said.

After he left the courtroom, Rhodes lawyer Phillip Lee Bright asked Mehta to dismiss the juror, saying that someone “can’t go back” from comparing “MAGA Republicans” to the Third Reich.

“He read a book, he ‘hearted’ the author,” prosecutor Jeffrey Nestler replied, arguing that the juror should be deemed qualified.

Ultimately, Mehta said it was a “close call” but that he would err on the side of striking the juror from the jury pool, saying the opinions the juror expressed outside of court painted groups of people with “too broad a brush.”

“At the end of the day, whatever the outcome of this case is, it has to stand up to public scrutiny,” said Mehta, a Barack Obama appointee. “I would rather people who retweeted what this juror has not sit in judgment [in this case].”

Over the course of the morning, a pattern had emerged whenever a potential juror would indicate that they tended to lean politically liberal: Fischer, offering slight variations on a theme, would regularly ask a variation of the same question in trying to get the jurors to use their own words.

The call of the question was generally the same as the verbiage echoed above.

“If somebody from a foreign country, who knows nothing about this country, asked you to describe supporters of Donald Trump, how would you answer?” Fischer asked one such would-be juror.

That member of the venire previously said she had attended at least one Black Lives Matter march in 2020 and, more recently, a rally regarding the Supreme Court’s decision to overturn Roe v. Wade, which guaranteed abortion access.

“Likely negative,” the juror, a white woman, responded, although she softened her response somewhat by adding that she has family members who support the former president.

Nicole Reffitt, the wife of Texas militia member Guy Reffitt, who was the first Jan. 6 defendant to be convicted by a jury, spent around 45 minutes in the courtroom gallery, observing as Mehta and the lawyers vetted various potential jurors. She appeared to react negatively when Mehta overruled a defense to request to dismiss one juror who lived near Capitol Hill on Jan. 6 and had indicated that she felt a personal connection to the events of Jan. 6.

Mehta started the day aiming to interview 40 jurors, a goal he admitted was “a little bit ambitious.” Having spoken with nine potential jurors by the early-afternoon lunch break, Mehta decided to cut that number down to 30.