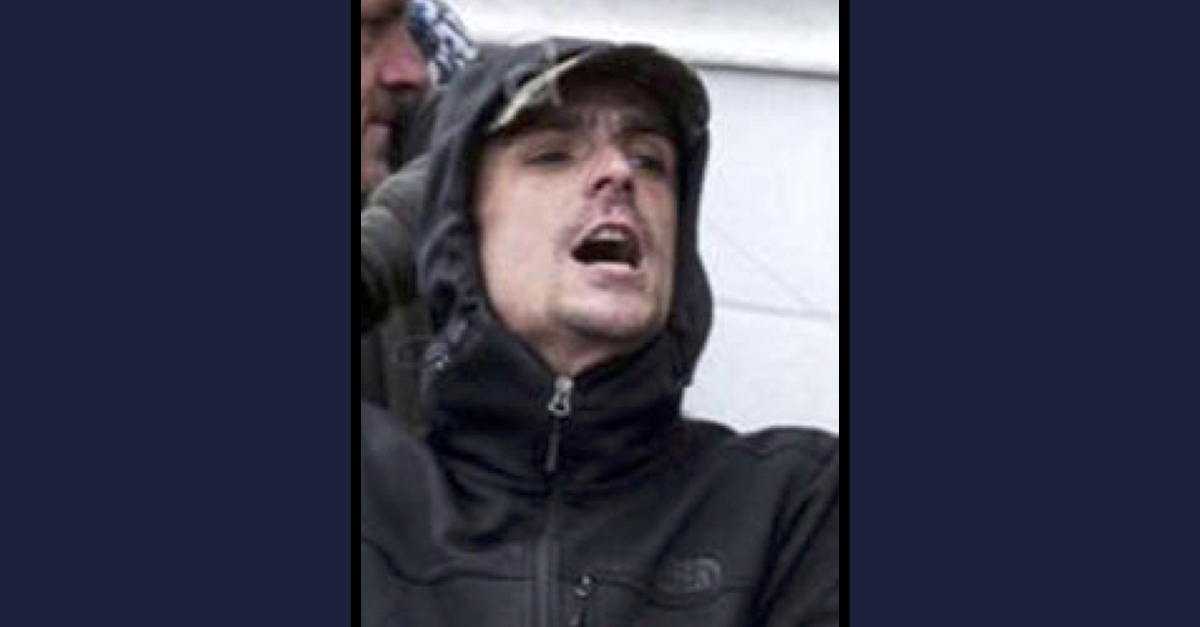 A man charged in connection with the Jan. 6 attack on the U.S. Capitol Complex and who searched for information about Michigan Gov. Gretchen Whitmer (D) during the two days prior to the breach was sentenced Wednesday in a separate case involving “approximately 143” expletive-laden and violent threats to a Michigan 911 dispatch center on Jan. 5, 2021.

Jonathan Joshua Munafo, 35, will serve the next two years in prison, a federal judge determined, because of those rants and ravings — which included references to the “Insurrection Act.”

After serving two years behind bars, Munafo must serve three years on supervised release, according to a U.S. Department of Justice press release.

Munafo, described as being “originally of Massachusetts” but “most recently of Winter Park, Florida,” pleaded guilty in May to communicating threats in interstate commerce in connection with the 911 calls to Michigan.

The DOJ described the allegations at the time of conviction:

Munafo . . . called the Calhoun County, Michigan 911 dispatch line over 140 times on January 5, 2021. Munafo demanded to speak to a Deputy Sheriff or Sergeant about unspecified issues, but did not have an emergency to report. When the dispatcher refused and asked him to clear the line, Munafo repeatedly called back.

During the 911 threats, prosecutors said Munafo identified himself as “Yankee Patriot.”

According to a government sentencing document, the defendant targeted Calhoun County, which surrounds Battle Creek in the south central portion of Michigan’s lower peninsula, because of “a social media post he had seen.” The contents of that post were not immediately clear from the court record.

The document says neither the defendant nor the dispatcher knew one another, and there is no evidence they had prior contact. However, the original charging paperwork suggests that Munafo was remarkably well researched as to the dispatcher he had called. Here are some of the (mostly) unredacted versions of the things Munafo said:

MUNAFO advised the 911 dispatcher that he knew where she lived, and recited accurate information about her mortgage and tax obligations. MUNAFO told the dispatcher that he would maim her, kill her, and attack her family if she did not put a deputy or sergeant on the line. In one call he demanded, “[P]ut a fucking cop on the phone now you stupid bitch, or it’s going to go way worse for your family!” In another he threatened, “[B]itch, I’m gonna cut your throat. I’m gonna make you eat your fucking nose. I’m gonna hurt you bad for this. It won’t be today, it won’t be tomorrow, it’ll be fucking soon though, you stupid c[**]t. Insurrection Act, I’m coming to your door first and it’s public knowledge, you stupid, stupid bitch!” MUNAFO was evidently aware he was breaking the law, stating, “Each one of these calls are gonna be like a charge, right? I’ll never see a judge.”

“The next day,” prosecutors asserted, “Munafo allegedly participated in the assault on the U.S. Capitol.” 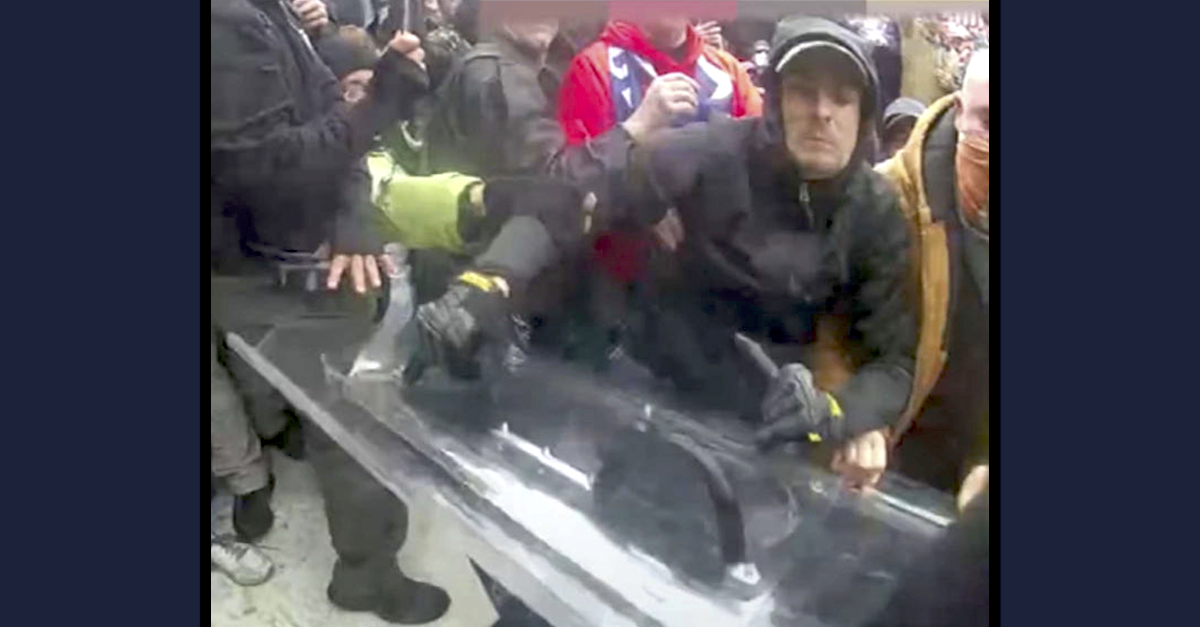 A statement of facts filed in Munafo’s Jan. 6. case says he “wore a black hooded jacket to the capitol, struck a U.S. Capitol Police officer “twice in the head and body with a closed fist before violently ripping the officer’s riot shield out of his hands.”

That case remains pending in U.S. District Court for the District of Columbia, but a mid-September document says that “good faith plea negotiations” are ongoing.

The defendant appears to be well traveled. The D.C. case said Munafo’s name was contained in New York State driver’s license records, and the paperwork also notes that he gave an interview to a local television crew in New Hampshire after attending a Donald Trump rally in that state. 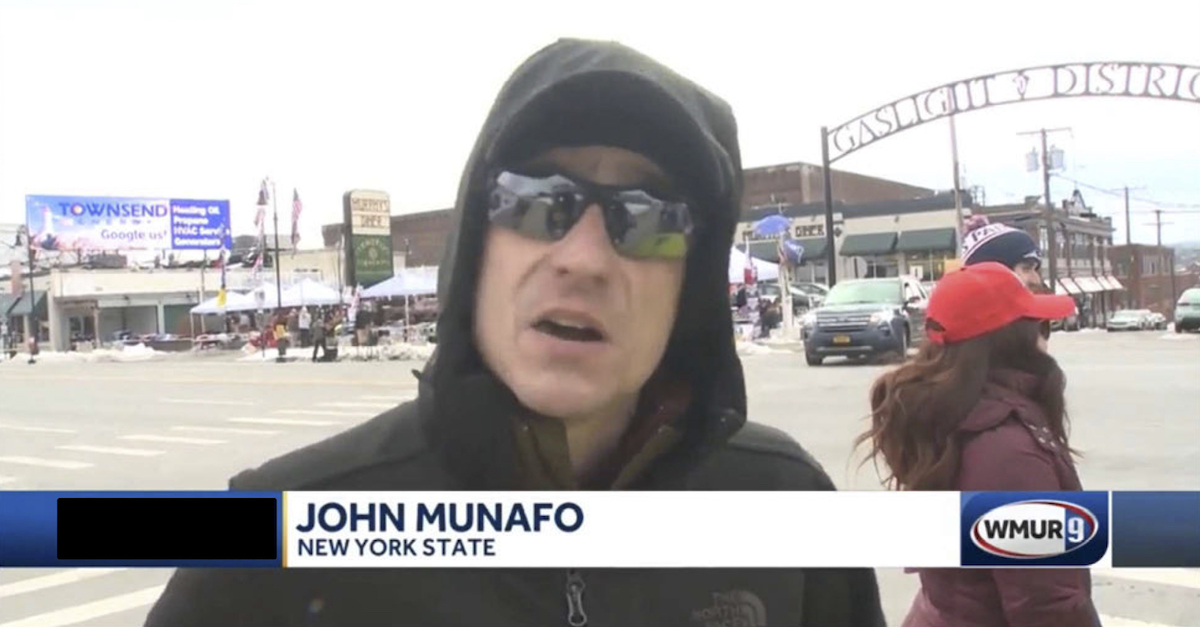 Jonathan Joshua Munafo appears in a screengrab from a WMUR-TV interview after a Donald Trump rally in New Hampshire. The image was embedded in federal court filings.

A search of Munafo’s phone and Google accounts revealed that the defendant for “Freedom Plaza, Washington, DC,” several “firearms and military surplus stores,” and “Gretchen Whitmer” on Jan. 4 and 5 in 2021.

“The recordings establish the dispatcher was consistently polite and professional notwithstanding her ordeal,” the feds wrote.

Where there is no evidence of a personal dispute, it stands to reason that the motivating factor behind the threat was the victim’s official status. See United States v. Snipes, 466 F. App’x 800 (11th Cir. 2012). Munafo and the victim dispatcher did not know each other, and had never spoken before. By his own admission, he only threatened her because she was “screening” his calls and preventing him from talking to a Sheriff’s Office supervisor. In other words, exercising her official duties as a county employee.

Prosecutors sought a sentence at the “high end” of the advisory guideline range of 18-24 months, and U.S. District Judge Janet T. Neff agreed.

Prosecutors noted that the defendant had also made multiple calls to a Massachusetts State Police barracks Sept. 17, 2020.  In those calls, the defendant “made profane and verbally abusive statements” and “refused to state his name or emergency,” prosecutors wrote in the sentencing brief.

The Michigan fiasco unfolded, according to the original charging documents, when “a man in a car covered in ‘Trump’ stickers threatened to shoot another man at a highway rest stop near Salisbury, Massachusetts.  In response to a summons over that incident, the defendant allegedly placed “approximately 21” calls “during which he utilized vulgar language and yelled at Troopers.”

The Michigan case slowed at one point because the entire federal public defender’s office sought to withdraw from representing the defendant, according to a Dec. 16, 2021 filing. That document cites an attorney-client relationship that was “beyond salvage”:

Defense counsel submits that the attorney-client relationship has broken down irreparably. Defense counsel has worked diligently to provide the best representation possible for Mr. Munafo. However, Mr. Munafo has expressed directly to Attorney Fisher his unequivocal dissatisfaction with his services, his advice and counsel regarding his case, and his overall representation of him. Mr. Munafo indicated he believed that counsel does not have his best interests in mind and that an irreconcilable conflict exists between him and counsel.

Earlier in the proceeding, a mental commitment and evaluation was ordered for Munafo, but the public defender’s request to withdraw states that Munafo was, indeed, found competent to stand trial.

In a press release, U.S. Attorney Mark A. Totten stressed that the behavior exhibited in this case “interferes with the life-saving duties of first responders and jeopardizes the public’s safety.”

“Our public servants on the front lines should never be subjected to this type of harassment for simply doing their jobs,” Totten said.

James A. Tarasca, the Special Agent in Charge of the FBI in Michigan, concurred.

“Public servants – particularly those who work in already stressful positions – should not be threatened or intimidated for doing their jobs,” Tarasca said.

A document filed Sept. 13, 2022, in the defendant’s D.C. case says he was at that time incarcerated at the Newaygo County Jail in White Cloud, Michigan, north of Grand Rapids.