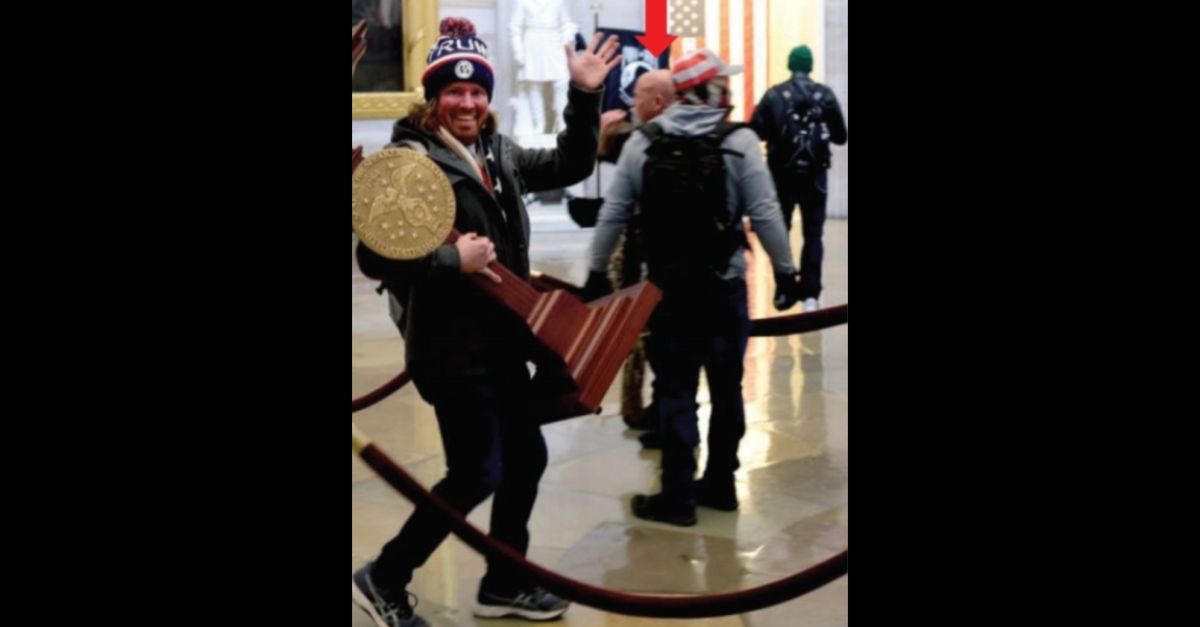 Washington state man Jeffrey Grace was arrested on Thursday after photo evidence showed him inside the Capitol during the D.C. insurrection of Jan. 6, federal authorities say.

Investigators claim Grace made a cameo appearance in the theft of House Speaker Nancy Pelosi’s lectern. Look at the picture above and note the red arrow that the FBI edited into the photo to identity the suspect. That’s Grace, authorities said. He just so happens to be standing behind Florida man Adam Johnson, seen carrying the lectern. As previously reported, Johnson faces charges including theft of government property after authorities said the lectern—originally on the third floor on the House side of the Capitol building—was found the next day in the Red corridor of the Senate wing of the Rotunda.

Supporters of then-President Donald Trump raided the Capitol Building on Jan. 6 after he continued to lie that he won the 2020 presidential election by a “landslide,” telling his supporters the election was being stolen from him and them. Rioters postponed but did not prevent Congress from certifying results for the actual winner, President Joe Biden. Five people died amid the chaos: four Trump supporters, and one Capitol officer. Another Capitol officer, a D.C. Metro officer, and an insurrection defendant each died by suicide days in the ensuing days.

According to an affidavit, Grace landed on the FBI’s radar on Jan. 19. A tipster told the feds that they learned from a relative–an acquaintance of the defendant–that Grace was at the Capitol Building.

An agent interviewed the defendant two days later. According to this version of events, Grace said he was at D.C. with his son for sightseeing and to attend the Trump rally. Separated from his son, he began marching with a group of people toward the Capitol. The chaos immediately followed from an incendiary speech then-POTUS Trump made at the nearby Ellipse park. Grace admitted entering the building from the north through an open door. Like some other defendants, he said police officers were just standing there. But unlike others, he acknowledged that police seemed to be afraid.

“According to GRACE, two Capitol Police Officers were standing at the door when he walked in, but they did not say anything to him,” the affidavit stated. “GRACE stated that the law enforcement officers appeared to be overwhelmed by the number of protesters and looked scared.”

As an institution, Capitol police have been criticized as unprepared for the events of that day. In the aftermath, police admitted they knew of “strong potential for violence” and “should have been more prepared for this attack.”

As for Grace, he seemed to depict himself as a deescalating element: He claimed to have picked up items that people knocked over, and took a metal pipe from a person and put it behind a wooden object in the Rotunda. He said he decided to leave after seeing people commit property damage, but the original door was blocked by police, so he climbed out a broken window. He denied being a part of pro-violence groups, but he said knew people from the Three Percenters, Proud Boys, and 1% Outlaw Motorcycle Gang.

And, yes, Grace allegedly admitted that was him in the oft-shared picture of Johnson carrying the lectern. The FBI also cited some CCTV footage putting the defendant at the scene. It showed him placing something behind a statue, and helping reattach velvet ropes onto stanchions, authorities said.

Grace is charged with knowingly entering or remaining in any restricted building or grounds without lawful authority. He was scheduled for an initial court appearance on Thursday. Online records viewed by Law&Crime show he was ordered to be released after processing. He is represented by a public defender.