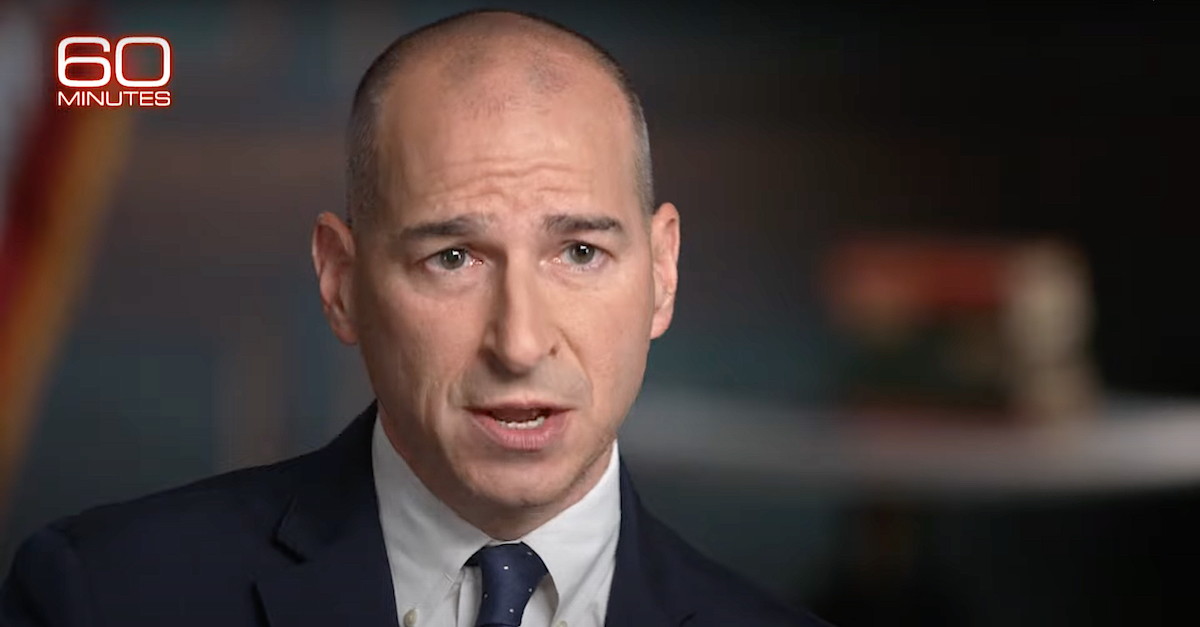 A Sunday 60 Minutes interview by Michael Sherwin, the former acting U.S. Attorney for the District of Columbia, appears to be causing trouble in several of the highest profile cases federal prosecutors have pressed since the Jan. 6 siege on the U.S. Capitol Complex.

The judge’s order demands “[a]ll counsel of record–including all government counsel” to appear for a video hearing Tuesday at 4:30 p.m. EST “concerning recent statements to the media about these proceedings.” The defendants are not required to attend.

The 10 defendants are accused of being members of the Oath Keepers. Prosecutors describe the group as “a large but loosely-organized collection of militia that believe that the federal government has been coopted by a shadowy conspiracy that is trying to strip American citizens of their rights.” Prosecutors say the group accepts anyone but maintains an “explicit focus on recruiting current and former military, law enforcement, and first-responder personnel.” The name of the group “allude to the oath sworn by members of the military and police to defend the Constitution ‘from all enemies, foreign and domestic.'”

The judge’s order does not directly name Sherwin’s 60 Minutes appearance as the impetus behind the hastily ordered hearing, but the connection seems likely.

Documents filed in another case do make a direct connection.

The defense then calls out the following:

The Nordean document, which is styled as a “notice of government statements to media about this case,” is a supplement to a previous motion which attempts to keep Nordean out of jail pending trial.  The government recently sought to keep Nordean incarcerated as his case winds through the courts.  Nordean’s pretrial detention saga and charging documents have been well-documented by Law&Crime’s previous reports.

It is unclear from the new document precisely how Nordean’s attorneys hope to link the interview to the previous attempt to keep Nordean at lest temporarily free from jail.

To introduce the interview, correspondent Scott Pelley noted that “Sherwin had said little” about the cases thus far — “but Wednesday, before he moved to his next assignment for the Department of Justice, he sat down with us to explain the nationwide dragnet which began after the riot.”

Sherwin was tapped by former President Donald Trump to run the D.C. prosecutor’s office. The Joe Biden administration ended up installing Channing Phillips as acting U.S. Attorney in Washington; as of last week, Sherwin moved back to Miami to fill an Assistant U.S. Attorney role.

The timing of Sherwin’s tenure with the D.C. office is important. Under legal ethics rules, attorneys are generally discouraged from talking to reporters about cases they have handled or currently are handling. However, the rules still allow plenty of wiggle room for attorneys to discuss matters with the press.

During the interview, Sherwin noted that 400 separate defendants had been charged thus far in connection with the events of Jan. 6. He summarized the charges filed against many. He then opined that other charges seemed likely in cases involving militia groups.

“The 10% of the cases (I’ll call them more complex conspiracy cases) where we do have evidence — it’s in the public record — where individual militia groups from different facets (Oath Keepers, Three Percenters, Proud Boys) did have a plan — we don’t know what the full plan is — to come to D.C. organize and breach the Capitol in some manner,” the then-current, now-former top D.C. prosecutor said.

Sherwin’s reference to the “public record” is legally critical. Under most ethics guidelines, attorneys are free to talk to the press about information already contained on the public docket. D.C.’s rule is even more wide open than the American Bar Association’s model rule in this area.

Pelley referred to Sherwin as “an eyewitness” to the president’s rally which preceded the U.S. Capitol Breach. Sherwin then described what he saw on Jan. 6. He said most people present at the rally were standard MAGA adherents who were simply there to watch then-President Trump speak. Others present didn’t fit the standard mold, Sherwin said.

“I noticed there were some people in tactical gear — they were tacked up with kevlar vests,” Sherwin said. “They had the military helmets on; those individuals, I noted, left the speeches early.”

Sherwin said he walked with those people to the Capitol.

“I eventually saw people climbing the scaffold,” he said.

Generally speaking, attorneys cannot appear in matters where they or members of their law firm are witnesses. The relevant D.C. version of the rule, however, explicitly contains an exemption for government attorneys.

“Was there a premeditated plan to breach the Capitol?” Pelley asked.

He went on to explain several of them.

Referring to various militia groups, he said the government uncovered “no specific communication about breaching the capitol.”  Rather, members were “talking about going there, taking back the House, talking about ‘stopping the steal,’ talking about how they need a show of force in D.C. — and we see that in December.”

He called Trump “the magnet” who brought people to the capitol on Jan. 6 and said many defendants have said they were there because they felt compelled by Trump to take action.

“Maybe the president is culpable for those actions,” Sherwin said, but he then demurred.  He said many militia members took things into their own hands because they considered Trump to be “all talk.”

Pelley challenged Sherwin on whether the Sedition Act applied.

“I personally believe the evidence is trending towards that and probably meets those elements,” Sherwin said. “I believe the facts do support those charges, and I think that as we go forward, more facts will support that.”

Washington, D.C. attorneys who speak to the press must adhere to D.C. Bar Rule 3.6. It states:

A lawyer engaged in a case being tried to a judge or jury shall not make an extrajudicial statement that the lawyer knows or reasonably should know will be disseminated by means of mass public communication and will create a serious and imminent threat of material prejudice to the proceeding.

Watch the full broadcast below via CBS/YouTube:

[image via screen capture from 60 Minutes/CBS/YouTube]