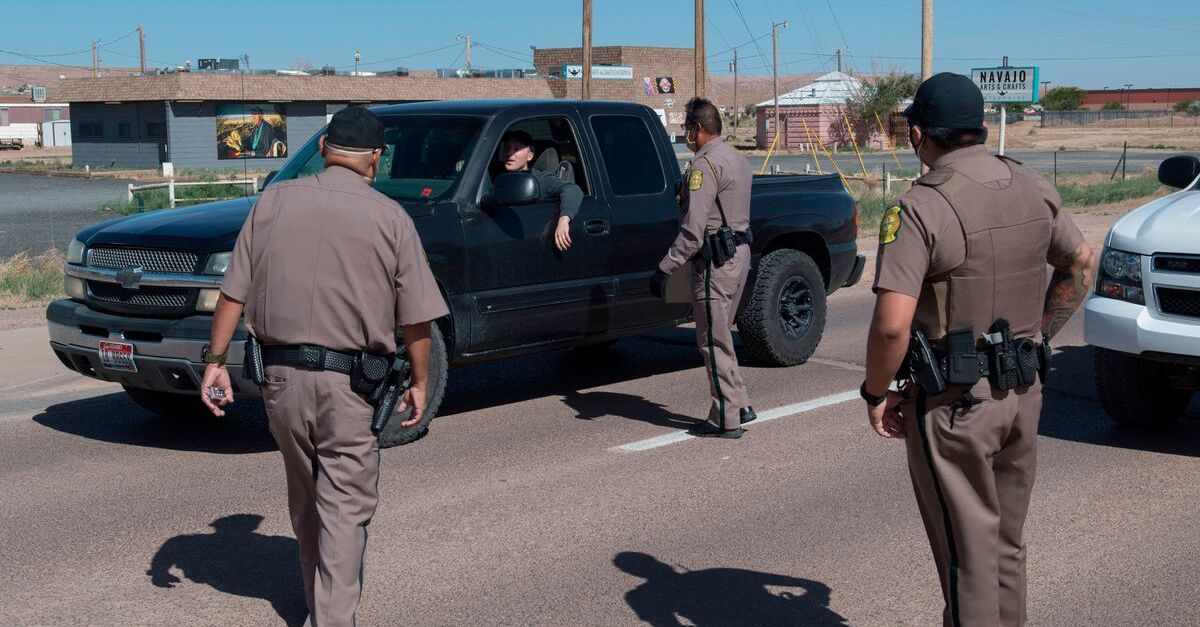 The Supreme Court of the United States heard oral arguments on Tuesday in United States v. Cooley, a case that occurs both literally and figuratively at the intersection of American and tribal law. The case involves roadside assistance, drug crimes, and the Crow people.

Before we get into what the justices said on Tuesday, here’s some background on the case.

In the wee hours of February 26, 2016, a police officer saw a pickup truck with out-of-state plates idling on the side on a remote stretch of highway. The officer stopped to see if assistance was needed, but the truck had heavily tinted windows and the driver did not respond clearly. After the officer asked the driver to roll down his window, the driver did so, opening the window a few inches. The officer looked inside and claimed that he saw the driver had bloodshot, watery eyes — and that a little boy was climbing on his lap.

The driver relayed a story about having pulled over to rest. While the driver talked, he allegedly began pulling wads of cash from his pockets, which the officer says alarmed him. The officer then unholstered his service pistol and asked the driver for identification — later claiming to have seen two semiautomatic rifles on the front passenger seat. Ultimately, after two separate searches of the vehicle, the officer found a pistol next to the driver’s hand, along with methamphetamine and drug paraphernalia.

The driver was charged with drug trafficking and firearms crimes.

None of these facts are particularly unusual or complex on their own. However, the where and the who are of profound import.

The location was federal Highway 212 which crosses the Crow Indian Reservation. The cop was Crow Highway Safety Officer James Saylor, and the driver was Joshua Cooley, a non-Indian. Cooley was charged with crimes in federal court, and moved to suppress the evidence as the fruit of an illegal search.

Indian tribes do not have jurisdiction over non-Indians. This is a principle that has repeatedly been affirmed by the nation’s high court in various prior cases.

According to Saylor, he saw that Cooley was a non-Indian at the point when he first saw Cooley through the car window. Saylor made no additional attempt to find out whether Cooley was an Indian or not.

Two lower courts ruled that a tribal officer cannot detain a non-Indian on a federal roadway unless it is apparent at the time of the detention that the non-Indian has been violating state or federal law. Because Saylor was not clear on Cooley’s alleged lawbreaking until after the truck was searched, Saylor’s seizure had been unauthorized and the evidence from the two unlawful searches conducted by the tribal officer was suppressed.

During oral argument, Deputy Solicitor General Eric J. Feigin argued on behalf the government petitioner that Indian tribes retain inherent authority to detain non-Indians on reasonable suspicion because those limited powers are not inconsistent with the powers of the federal government.

Conversely, defense attorney Eric R. Henkel (we will refer to him as Henkel or the respondent’s attorney from here) said the officer was enforcing non-tribal laws that had nothing to do with a tribal interest and argued that “the Crow tribe exceeded its authority.”

Justice Stephen Breyer gave little away during his questioning of the government attorney but appeared skeptical of Henkel’s position.

The liberal justice pushed Henkel to account for what he thought tribal officers do have the authority to do by throwing out a series of “What If…” situations. Henkel eventually said the first question to answer in each scenario should be whether or not the would-be detained person is subject to tribal authority.

Justice Clarence Thomas altered the fact scenario and asked Henkel if a tribal officer has the authority to detain a non-Indian who fit the description of a known serial killer.

Henkel said the tribal officer would have the authority to detain in that instance because it would have clearly relied on information obtained from U.S. law enforcement and would have only required a “positive identification.” The attorney contrasted that situation with what actually happened: a tribal officer first conducted a welfare stop and then proceeded to conduct a “full blown criminal investigation” which included forcing his client out of a vehicle “at gunpoint.”

Justice Samuel Alito appeared equally skeptical of the government’s and Henkel’s claims — pressing the government on the broader argument they appeared to be making while not necessarily disagreeing with the conclusion the government sought.

Picking up on Thomas’s questions regarding heinous crimes, Alito later pressed Henkel on a slippery slope argument that questioned what the standard should be for if and when an Indian tribal officer has any authority to intervene against a non-Indian whatsoever. Henkel settled on a version of a standard reached by the Ninth Circuit which he phrased as “an active breach of the peace.”

Justice Sonia Sotomayor, who like Alito, was mostly skeptical of the way the government framed their argument, was extremely hostile to the respondent’s attorney and asked why, if Indian tribes are not adjuncts of U.S. law via deputization and are not sovereign, they are subject to the Fourth Amendment’s exclusionary rule. The nation’s farthest left justice clearly set Henkel back on his heels a bit and the line of questioning ending with Henkel pointing out that the ICRA’s analogue was the actual point of law—which audibly did not satisfy Sotomayor, who would have continued her unfriendly inquiry, but who had to move on due to her time running out.

Justice Neil Gorsuch asked the government to account for where the Major Crimes Act begins — which severely restricts tribal sovereignty — noting there is a wide gulf between a Terry stop (which allows for brief detention of a suspected criminal based on an extremely low standard of evidence) and a prosecution. Feigin pushed back a bit about the framing of the question but Gorsuch got his way and the government attorney said he thought the “adjudicatory process” was probably where the Major Crimes Act begins.

Gorsuch, leaning toward the respondent, pushed back and wondered why a Terry stop was even lawful. During his questioning of Henkel, Gorsuch posed a question that seemed to help Cooley’s case by wondering what remedy, if any, would be available for a non-Indian against a tribal officer akin to a §1983 or Bivens claim. Henkel argued there isn’t a remedy beyond “exclusion of evidence,” which appeared to be the answer Gorsuch was looking for.

“Does the authority here come from the Constitution?” Justice Brett Kavanaugh asked.

Feigin said the tribes’ authority to detain comes from the inherent sovereign authority that Indian tribes had before they were incorporated into the United States and which “they never lost.” The government attorney added that this authority is not granted by the Constitution or Congress but that it is “recognized by both of those sources” and admitted that “we’re not looking at some specific provision.”

When pressing Henkel, Justice Kavanaugh seemed interested in crafting a limited remedy in order to “do no harm” so the court might issue a “narrow result” and not create broad “ripple effects.” Henkel rejected this offer, saying the cases cited by Kavanaugh were “dicta” that have been misrepresented by the government.

Cooley’s reply brief notes the respondent’s problem with that approach [emphasis in original]:

[T]he government is misinterpreting Duro and Strate by inserting words that do not exist. Throughout the Petition, the government repeatedly conflates the power to detain and transport with the power to detain, investigate, and generally police. Even a cursory review of Duro and Strate, however, reveals that [the Supreme Court] did not recognize that Indian tribes possess the broad authority to detain, investigate, search, and generally police non-Indians. Instead, [the Supreme Court] at most recognized a narrow circumstance in which a tribal officer possesses a limited authority to detain non-Indian offenders and transport them to the custody of state or federal authorities.

Justice Amy Coney Barrett circled back to Gorsuch’s line of questioning regarding arrests and asked the government to account for the extent of tribal sovereignty in light of various congressional acts and Supreme Court cases that have chipped away at those powers. Feigin admitted that the power to arrest non-Indians did previously exist but was eventually excised via jurisprudence and legislation. Barrett then wondered why tribal authorities have the ability to conduct a temporary Terry stop but not conduct an arrest.

“It seems like at some point that would transform into an arrest,” Barrett told Feigin — who replied that he wanted to differentiate from what the government considers a formal arrest and what might be “colloquially” considered an arrest by the public.

“We do think the tribe can do that,” the government attorney argued. “We do think they can hold a suspect on probable cause for a reasonable time on handover.”

Barrett said that under the Fourth Amendment, holding a suspect under those circumstances “seems like an arrest.”

While skeptical of the government’s claims, the newest justice was also reticent to endorse the new (and above-noted) standard set by the Ninth Circuit which allowed for a tribal officer to detain a non-Indian engaged in “an apparent or obvious violation of law.”

Henkel also wasn’t thrilled about that standard but somewhat endorsed it by describing it as a situation where public safety is “in jeopardy now.”