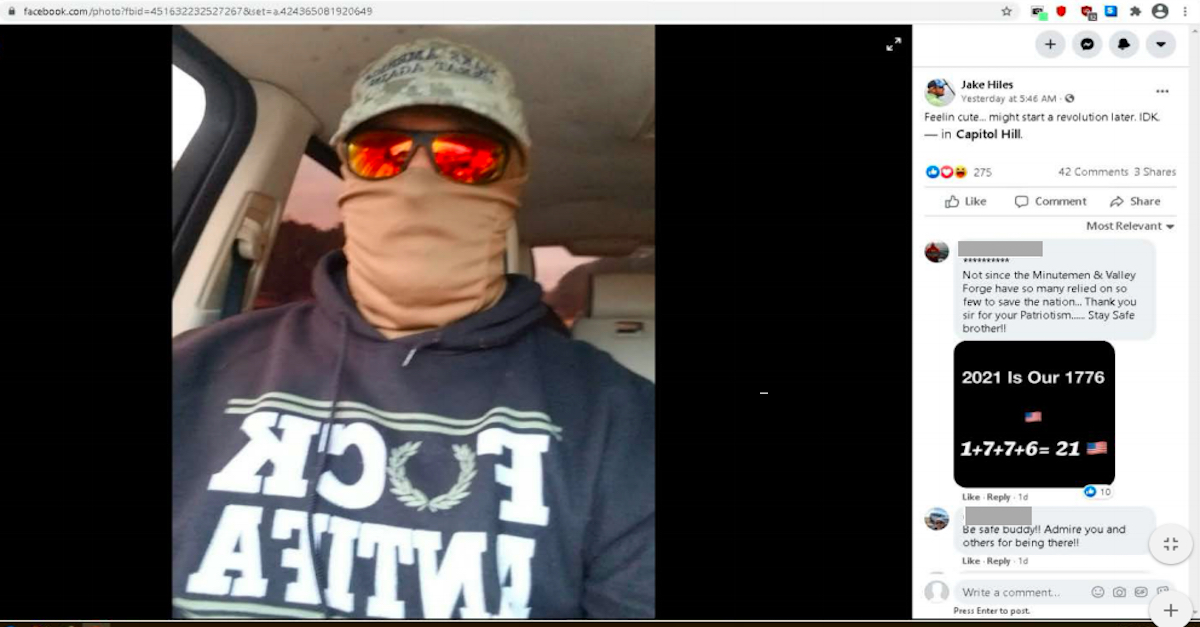 A charter fishing boat captain in Virginia Beach who openly called for starting a “revolution” on social media while wearing a “FUCK ANTIFA” hoodie has been arrested and charged in connection with the riots at the U.S. Capitol in Washington, D.C. on Jan. 6.

Jake Hiles, who previously gained national notoriety over the summer when he implemented a policy banning Democrats from chartering his vessels, was charged with knowingly entering or remaining in any restricted building or grounds without lawful authority, knowingly, with intent to impede government business or official functions, engaging in disorderly conduct on Capitol grounds, and parading, demonstrating, or picketing in the Capitol Building.

According to the charging document, law enforcement was able to identify Hiles through several pictures and videos he posted to his social media accounts from the riots—many of which were time-stamped and tagged with his location.

“As discussed further below, these videos and pictures include ‘selfie’ style footage from areas your affiant recognizes as both inside and outside the U.S. Capitol, sometimes including geo-tags identifying the location of the post as ‘Capitol Hill’ or ‘United States Capitol’ and accompanied by captions written in the first person,” the document stated.

On the morning of the “Save America” rally that eventually spiraled into supporters of Donald Trump storming the Capitol, Hiles also posted to Facebook: “Feelin cute…might start a revolution later, IDK – in Capitol Hill.”

Social media posts also revealed Hiles’s frustration at the death of fellow rioter Ashli Babbitt, who was shot and killed by Capitol Police during the melee.

“After being tear gassed for an hour, we entered the capitol, thousands of us. The fbi shot and killed a woman in front of us. We followed the trail of her blood out of the building,” he posted at 1:31 PM, according to the FBI affidavit.

The pictures and videos also show Hiles wearing a “FUCK ANTIFA” sweatshirt throughout his time on Capitol grounds.

Hiles made quite a splash this summer when he began refusing Democrats access to his Matador Fishing Charters.

“I’ve watched repeatedly as the Democratic Party has tried to regulate my industry out of business and based on some interactions I’ve had with customers this year I decided I didn’t want to have Democrats on my boat anymore,” Hiles told WAVY-TV in August. “I have to interact with these people; it’s a small area and when I’m on the boat with people for hours with people I don’t know, we talk about two things. Most of the time it’s politics and sports.”

During the interview he described himself as a conservative who “supports police, the military, believes in God, and loves America.”

See below for the full charging document: