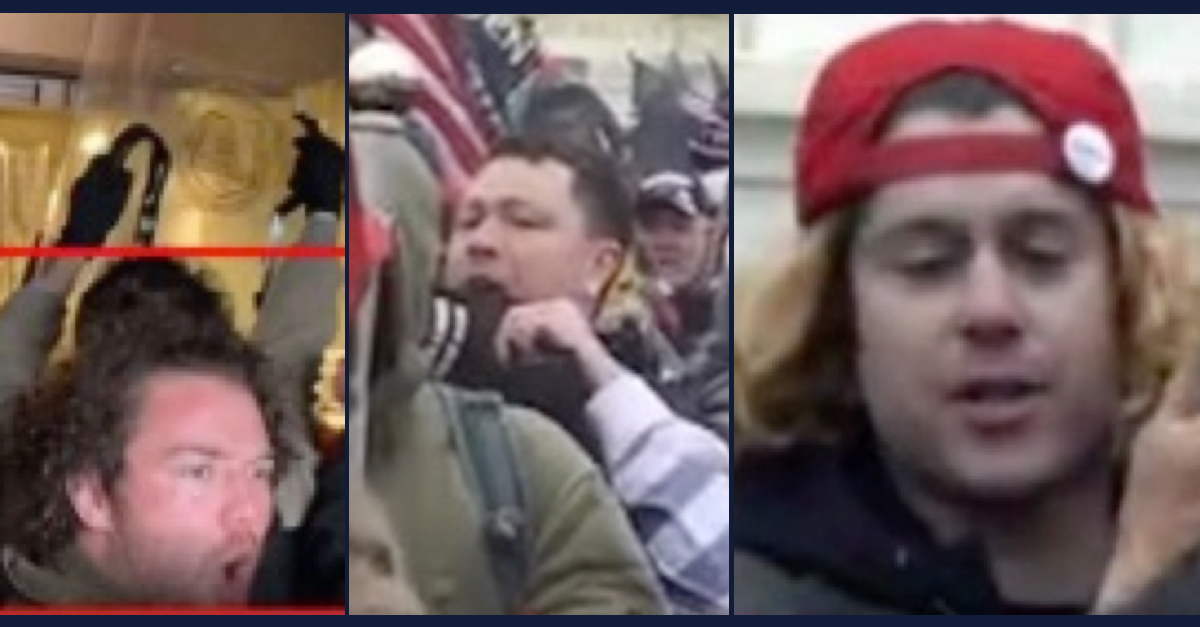 Three men accused of assaulting police officers during the Jan. 6 attack on the U.S. Capitol have been convicted of multiple felonies following a stipulated trial before a federal judge.

Robert Morss, 29, of Glenshaw, Pennsylvania, Geoffrey William Sills, 31, of Mechanicsville, Virginia, and David Lee Judd, 36, of Carrollton, Texas were all found guilty of obstructing an official proceeding in a bench trial before U.S. District Judge Trevor McFadden on Tuesday.

According to prosecutors, the men were part of the riotous crowd of Donald Trump supporters facing off against police at the entry to the tunnel area of the Capitol’s Lower West Terrace.

Morss, wearing a vest intended to carry body armor plates, joined the crowd at the West Front of the Capitol grounds at around 2:00 p.m., according to court documents. He faced off against police and unsuccessfully attempted to steal a police baton from an officer.

“Take a look around,” he reportedly yelled at police. “We are going to take our Capitol back.”

Morss then joined a line of rioters that pushed officers back, the DOJ said, and followed them to the Lower West Terrace.

“At approximately 3:03 p.m., he participated in a heave-ho motion in which the rioters rocked against the police line,” the DOJ said. “He wrested a riot shield from an MPD detective and passed it back in the tunnel, towards other rioters. He and others then created a wall of shields that they used to continue with the heave-ho efforts. Morss later joined several other rioters in climbing through a broken window. Morss entered an office within the Capitol, took a chair, and passed it out of the broken window to the rioters outside.”

Sills, wearing black goggles and a black gas masked, joined the crowd at the West Front at approximately 2:13 p.m., according to the DOJ. He threw several “pole-like objects” at police officers as they retreated, following the officers to the Lower West Terrace and into the tunnel.

“He wrested away a police baton from an MPD officer,” the DOJ press release said. “A few minutes later, he exited the tunnel, holding the baton above his head. He re-entered the tunnel several minutes later, moving to the line of officers. He then pointed a flashing strobe light at the police line, disorienting officers. Sills also struck at officers with the baton, hitting at least two of them.”

Judd, who was also part of the crowd at the West Front of the Capitol grounds, was among the group at the Lower West Terrace at around 2:43 p.m., according to the DOJ.

Judd then entered the tunnel at around 3:07 p.m., according to prosecutors, and “lit an object that appeared to be a firecracker” and threw it at the police line.

The charges of obstruction and assaulting, resisting, or impeding officers with a dangerous weapon each carry a potential 20-year prison sentence. The assault charge, absent the dangerous weapon, has a potential eight-year sentence, while robbery carries a maximum 15 years.

Morss, along with co-defendants Tristan Chandler Stevens, Patrick McCaughey, and David Mehaffie, had recently secured a bench trial before McFadden. That trial was set to start on Aug. 29. It is unclear what caused Morss to proceed with a stipulated trial, in which both the prosecution and defense agree to the facts of the case.

Unlike a plea agreement, in which a defendant may give up their right to appeal except under specific circumstances, a stipulated trial can leave the door open for a convicted defendant to appeal.

“Stipulated trials are fairly rare,” former federal prosecutor Michael Harwin told Law&Crime. Harwin said that the practices vary between jurisdictions; some courts will allow a defendant to plead guilty while preserving their appellate rights, while others will not allow conditional appeals.

“The strategic value [for a defendant] is generally to preserve appeal rights while trying to get ‘credit’ for saving the prosecutor and court time for going through a full trial on contested facts, when there really aren’t any,” said Harwin, who is not involved in the case. As for the prosecution, Harwin said that a judgment of guilt is a “big step” toward ensuring that justice has been served.

“The remaining step is ensuring the punishment for the crime is necessary and sufficient,” Harwin added. “We will see if that happens.”

An attorney for Morss and Sills confirmed that his clients have preserved their appellate rights.

McFadden, a Trump appointee, has a mixed record of convictions and acquittals in bench trials of Jan. 6 defendants. He is the only judge in D.C. so far to either partially or completely acquit someone who breached the Capitol. In June, he convicted a Confederate flag-carrying man and his son of felony obstruction as well as trespassing and disorderly conduct misdemeanors.