Delaware Man Who Carried Confederate Flag in Capitol Building on Jan. 6 Convicted of Obstruction Along with His Son Following Bench Trial 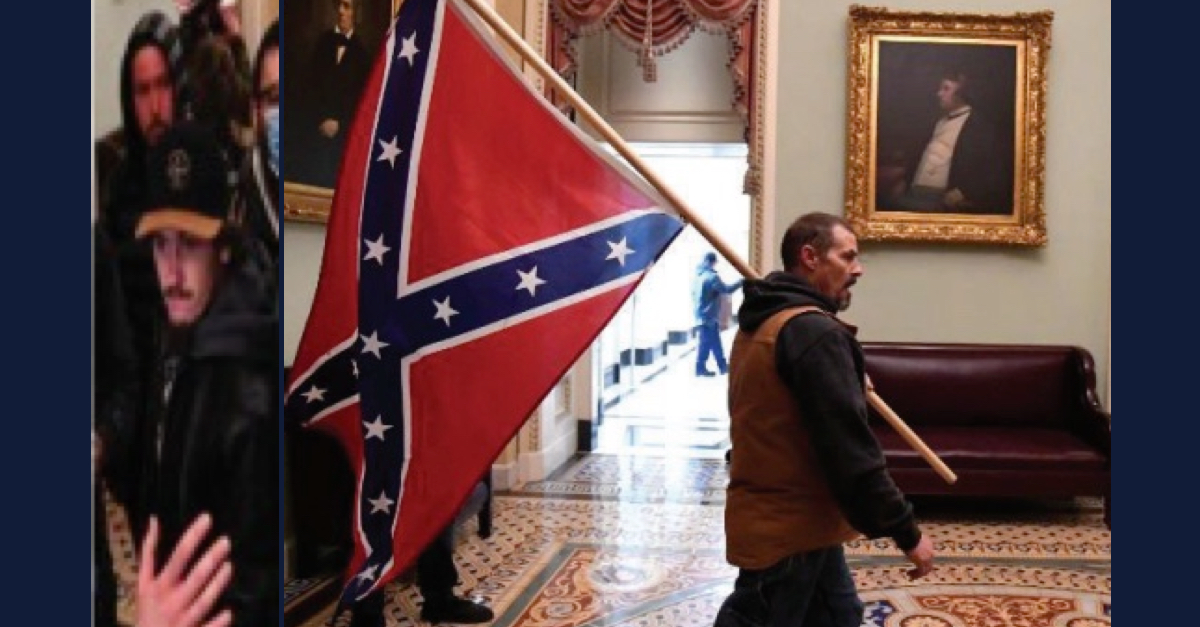 Two men from Delaware who stormed the U.S. Capitol on Jan. 6 — one of them while carrying a Confederate flag over his shoulder — have been convicted of obstruction, a felony.

Kevin Seefried, 53, and his son Hunter Seefried, 24, were both found guilty Wednesday of obstruction of an official proceeding, a felony technically punishable by up to 20 years in prison.

They were also convicted of four misdemeanor offenses each relating to trespassing and disorderly conduct in a Capitol building or grounds. Those charges carry a potential combined maximum sentence of three years.

Hunter was acquitted of three charges relating to destruction of government property.

The verdicts mark the first felony convictions in bench trials before U.S. District Judge Trevor McFadden, a Donald Trump appointee who has overseen two other Jan. 6 trials that resulted in either partial or total acquittals on misdemeanor charges.

According to prosecutors, the Seefrieds were among the first of scores of Trump supporters to breach the building that day. After attending Trump’s so-called “Stop the Steal” rally, they marched to the Capitol and joined a crowd heading up the steps of the building.

At around 2:13 p.m., they joined the first wave of rioters to breach the building and entered through a broken window that had been smashed by other people. Prosecutors had charged Hunter with destruction of government property for allegedly helping to clear some of the glass out of the frame, but McFadden declined to convict on those charges.

Once inside, the two men joined the crowd of rioters that chased Capitol Police Officer Eugene Goodman up several flights of stairs, a harrowing scene that was captured on video. Goodman is credited with leading that crowd away from the entrance to the Senate chamber and toward his law enforcement colleagues, where the verbal confrontation with the Seefrieds and others continued.

The trial marked the first time Goodman has testified in a Jan. 6 prosecution. He said that both defendants were among those demanding to be taken to where Congress was certifying the Electoral College votes that sealed Joe Biden‘s win in the 2020 election.

“Where are they counting the votes at?” Kevin yelled, according to Goodman’s testimony.

“You can shoot me, but we’re coming in,” Kevin also said to Goodman.

Another Capitol Police officer who testified, Brian Morgan, said that during the confrontation, Kevin asked: “Why are you protecting them?”

Morgan said he assumed Kevin was talking about Congress.

Kevin was also photographed carrying a Confederate flag throughout the building, in what became one of the day’s most indelible images. Goodman had testified that the elder Seefried had jabbed at him with the base of the flagpole.

At trial, Kevin’s defense maintained that he didn’t intend to stop Congress from counting the electoral votes, but McFadden wasn’t convinced.

“I find that he knew what he was doing,” McFadden said, according to a Politico report.

McFadden said that as to the misdemeanor charges, the prosecutors easily proved their case.

“Although defendants did not explicitly admit their guilt, they made no real effort to refute the government’s evidence, which I found overwhelming,” McFadden said, according to a report from Washington, D.C. CBS affiliate WUSA.

McFadden determined that Kevin was the “prime mover” in the decision to go to Washington, according to Politico. Hunter’s guilt, the judge said, was a “closer question,” but in the end decided his guilt was also apparent, particularly because of his “aggravated conduct” that followed.

When an FBI agent interviewed Hunter after Jan. 6, McFadden said, Hunter “showed a pattern of deception and minimization of his actions.”

The Seefrieds’ trial started Monday. Neither defendant testified on their own behalf.