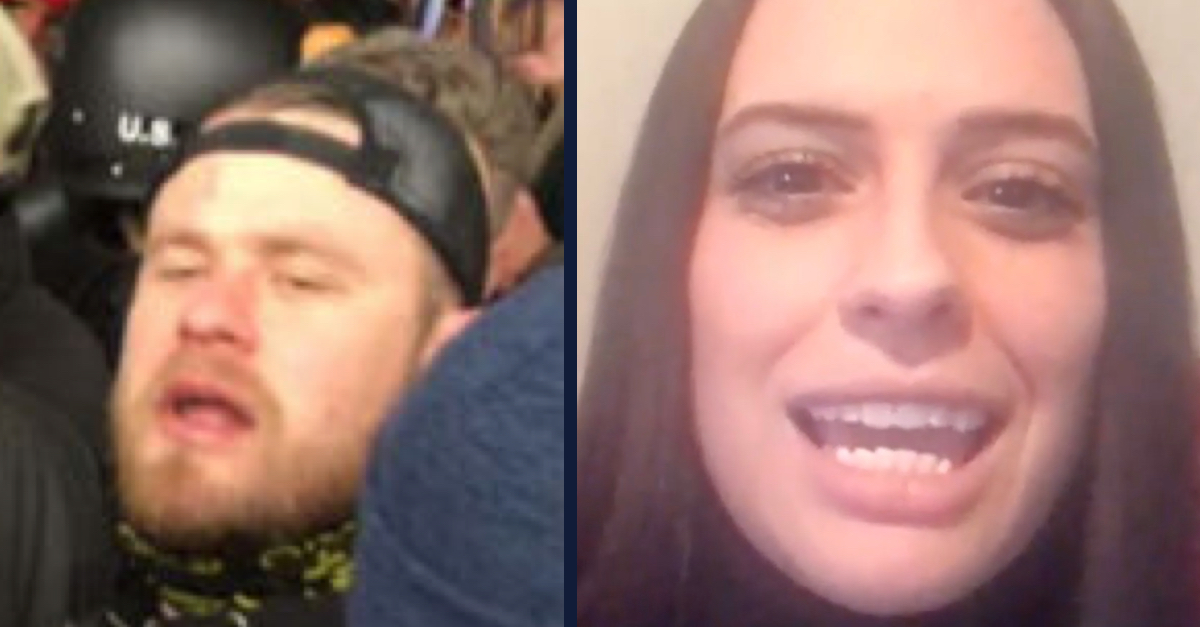 As federal prosecutors gear up to try the Jan. 6 seditious conspiracy case against members of the far-right Proud Boys group, one of the accused says that the government is trying to intimidate defense witnesses.

In a Thursday filing, lawyers for Ethan Nordean described an attempt by government prosecutors to “threaten or intimidate defense witnesses.” Lawyer David B. Smith wrote that, during a Dec. 2 hearing before U.S. District Judge Timothy Kelly, “counsel had indicated that he wished to name ‘John Does’ in Defendant Nordean’s witness list, as there was reason to believe that the government would attempt to threaten or intimidate defense witnesses to prevent or alter their testimony at trial.”

Smith’s attempt to keep witnesses anonymous appears to be based on a sworn declaration from Adrienna DiCioccio, a right-wing organizer and political activist with links to the Proud Boys and Donald Trump ally Roger Stone.

“I am a stay-at-home mother of a 17-month-old son,” DiCioccio says in her declaration. “I know Ethan Nordean through personal and professional connections.”

DiCioccio says that she “was present on the evening of January 5, 2021 in an Airbnb residence in Washington, D.C., where Ethan and others were gathered.” She does not indicate who else was in the rental at that time.

She alleges that when FBI agents interviewed her in September 2021 about the Jan. 6 attack, “one of the agents indicated that the government wanted to keep its meeting with me ‘discreet.'” She initially didn’t respond to requests for a second interview, but she eventually “relented” and agreed to speak with investigators on Nov. 4, 2021.

During this second interview, the agents and prosecutors asked for my recollections about the evening of January 5 in the Airbnb residence where Ethan and others were gathered. I do not recall the specific words I used, but I informed the interviewers generally that I disagreed with the suggestion that Ethan and the others in his group were planning violence or an attack on the Capitol on January 6. I generally informed the agents and prosecutors that, as someone involved in planning peaceful events with the Proud Boys in the past, I disagreed with their suggestion that Ethan and others in the Airbnb were planning violence the following day in D.C.

DiCioccio, who said in her declaration that she was “surprised” to see two prosecutors accompany the FBI agents to her home that day, paints a picture of a vulnerable mother who was the target of government fear tactics.

“Near the end of the interview, I could see the prosecutors were not satisfied with what I was telling them,” DiCioccio says. “The conversation became heated. For most of the interview, my son was sitting in my lap. The government’s interviewers were using rhetoric like, ‘You don’t want to lose him.'”

DiCioccio said that one of the prosecutors indicated that she would be charged with “obstruction of justice” and “trespass” in connection with Jan. 6.

“I remember that the prosecutor’s indication that I would be charged came after my comments to the group that I did not agree with their questions implying that the group in the Airbnb on January 5 were planning to attack the Capitol or commit violence on January 6,” DiCioccio says in her declaration. She added that she was left with the impression that she “would be prosecuted if [she] didn’t give the government what it wanted.”

DiCioccio indicated that after the interview, the agents called and tried to soften their perceived message.

“The agent added words to the effect that I should not worry, that if I did end up being charged it would end up being a misdemeanor offense, not obstruction of justice,” DiCioccio said. “The agent made reference to a certain unnamed January 6 defendant whose obstruction charges were dropped for a misdemeanor and said it would be this way for me if I were charged. The agent added words to the effect that they would not come arrest me and make it a public deal.”

“After hearing the prosecutor’s statement about being charged, I was terrified for myself and for my son,” DiCioccio added.

According to Nordean’s motion, prosecutors said that the notion that the “[g]overnment has somehow pressured witnesses, threatened witnesses, gone to witnesses when they were represented by counsel without counsel present, all of that is just categorically false.” The motion also said that the government described Nordean’s version of events was “inaccurate and incomplete.”

The filing notes that prosecutors provided Smith with its writeup about the DiCioccio interview. Smith describes that report as being “consistent with, or at least not inconsistent with, the witness’s account.”

Nordean is charged alongside co-defendants Joseph Biggs, Zachary Rehl, Dominic Pezzola, and Proud Boys leader Enrique Tarrio with seditious conspiracy in connection with the Jan. 6 attack on the U.S. Capitol. According to prosecutors, Tarrio created a “special chapter” of the Proud Boys — the “Ministry of Self Defense,” or MSOD — and used that group to coordinate actions on Jan. 6, when scores of Trump supporters overwhelmed law enforcement at the Capitol and broke into the building as Congress was certifying Joe Biden‘s 2020 electoral win.

The rioters’ breach brought Congress’ proceeding to a standstill and forced lawmakers and staff to either evacuate or shelter in place for hours.

A sixth defendant, Charles Donohoe, pleaded guilty in April and has been cooperating with the government.

The U.S. Attorney’s Office did not immediately reply to Law&Crime’s request for comment, and the federal docket did not indicate a responsive filing at the time of publication.

The Proud Boys, designated by the Southern Policy Law Center as a hate group, is a self-described “Western chauvinist” group known for engaging in political intimidation and street fighting. During a 2020 presidential debate, then-President Trump refused to denounce the group outright, instead telling its members to “stand back and stand by.”

According to the House committee investigating the Jan. 6 riot, Proud Boys members were among the first to identify and attack a security soft spot on Capitol grounds.

Tarrio is not accused of breaching the Capitol building that day, and prosecutors have acknowledged that he had indeed left the District of Columbia at that time in accordance with a court order following his Jan. 4 arrest for burning a stolen Black Lives Matter banner in front of the historically Black Asbury United Methodist Church in December 2020. At the time of his arrest, he was also found to be in possession of two high-capacity firearm magazines, in violation of D.C. law.

Prosecutors also say, however, that Tarrio did not immediately leave the area after his arrest, and documentary footage from that night shows him meeting Oath Keepers founder Stewart Rhodes in an underground parking garage. Rhodes was recently convicted of the same seditious conspiracy charge levied against Tarrio and his codefendants, which carries a potential 20-year prison sentence.

Tarrio has also criticized the government’s approach to defense witnesses, arguing in a recently filed motion to dismiss that prosecutors’ decision not to grant immunity to one of his witnesses is a violation of his constitutional rights and warrants nothing less than a dismissal of the case against him.

As in Tarrio’s case, some defense witnesses in the Rhodes trial were also at risk of facing criminal charges. Meanwhile, the government’s prosecution continues apace: some 900 people have been charged, and around half of those have pleaded guilty. Dozens have been convicted of felonies at trial, and so far six people have either pleaded guilty to or been convicted of seditious conspiracy, widely considered to be the most serious charge filed so far.

The Proud Boys seditious conspiracy case is scheduled to start before Judge Kelly, a Trump appointee, on Dec. 19.

[Image of Nordean via FBI court filing. Image of DiCioccio via YouTube screengrab.]