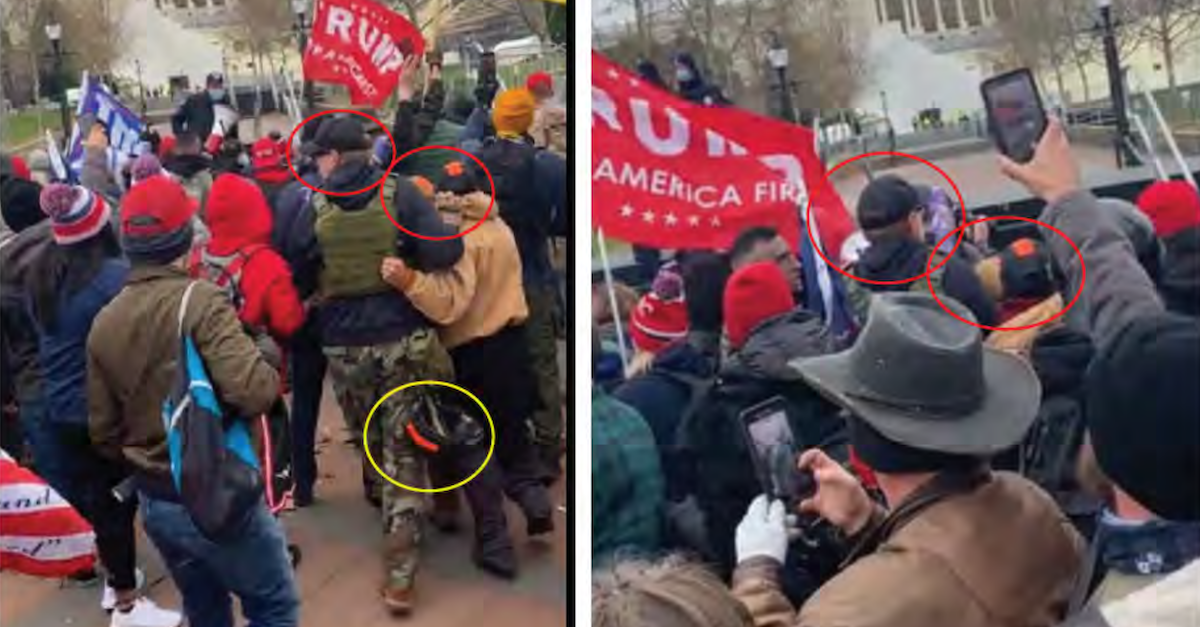 Now, federal prosecutors unsealed charges against five rioters affiliated with Proud Boys, including a rare female self-proclaimed recruit of the anti-feminist and extremist group whom Trump infamously told to “Stand back and stand by” at a political debate.

“The metal barricades were toppled, and the crowd advanced toward the Capitol,” the complaint against those Proud Boys—William Chrestman, Christopher Kuehne, Louis Enrique Colon, Felicia Konold and her brother, Cory Konold—narrates.

The FBI describes the clothing and tactical gear of the quintet in detail in a criminal complaint unsealed on Wednesday, which identifies each member from video footage and social media posts. Multiple members of the crew had tactical helmets and gloves. Wearing green-and-tan camouflage pants, a black baseball hat, and black books, Chrestman appeared to be carrying “a wooden club or axe handle, which was initially disguised as a blue flag,” authorities say.

To online sleuths, Chrestman curiously resembled the Proud Boys’ founder Gavin McInnes, who also previously co-founded the Vice media empire shifting to far-right outlets and activities. McInnes’s self-styled “Western chauvinist” group would be described as something else entirely by his home country of Canada: a terrorist organization.

Although the social media detectives were mistaken, an FBI agent found the mix-up understandable: “Though this was a misattribution, your affiant submits that Chrestman does have similar facial features to Gavin McInnes,” the agent’s declaration states in a footnote. 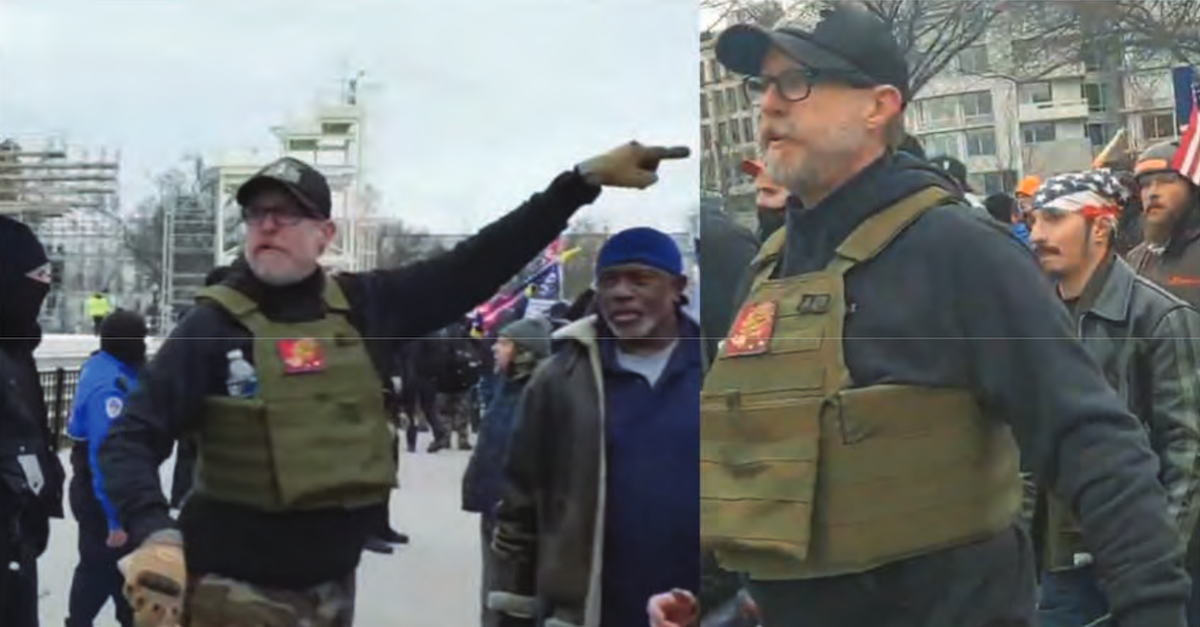 Apparently dressed for combat, the Proud Boys have been described by impeachment managers as the troops Trump cultivated before the election as a back-up plan to cling onto power. Charging papers depict its members going into battle.

“Within minutes, Chrestman, Felicia Konold, and Cory Konold had moved past the barrier and placed themselves at or near the front of the crowd at the next police barrier,” the complaint states.

Court papers show that trio at the front of the crowd, with Chrestman allegedly taunting and threatening the officers.

“You shoot and I’ll take your fucking ass out!” Chrestman is quoted exclaiming.

“At a different point, Capitol Police officers attempted to arrest one person from the crowd, and Chrestman encouraged other members of the crowd to stop the Capitol Police from arresting him,” the complaint continues.

Chrestman and Felicia Konold can be seen barking commands like these throughout the FBI’s affidavit.

“Don’t let them take him!” Chrestman told the crowd, apparently referring to the police arrest of a riotor.

In the complaint, Felicia Konold can be seen helping her brother Cory put on Chrestman’s black helmet with orange tape. 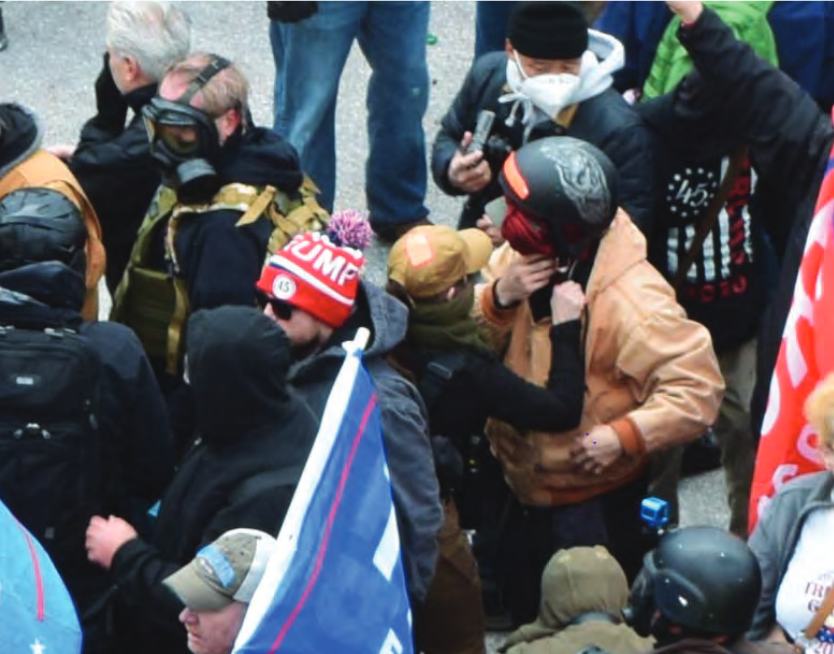 Chrestman allegedly led the crowd into chants of “Whose house is this?”—with a twist.

As the crowed roared back “Our house,” Chrestman is quoted asking if they want it back, and after getting the desired response, shouting back, “Take it!”

That required vaulting through another barrier, and authorities claim that Felicia Konold kept it from closing with one arm in its path—later receiving an assist from Chrestman holding a wooden stick. 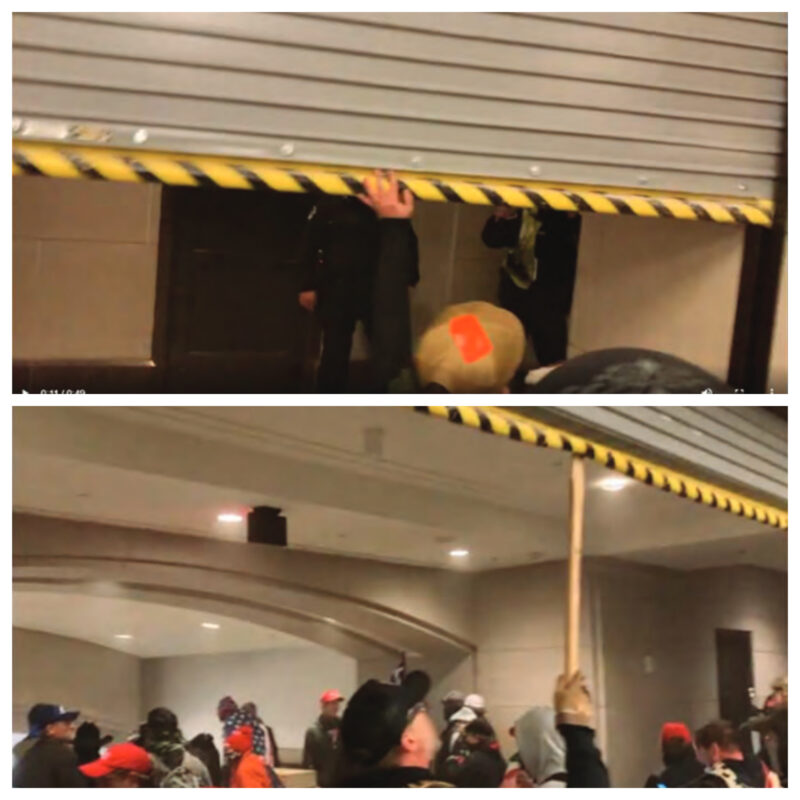 “Kuehne grabbed what appears to be a podium and placed the podium strategically in the track of one of the barriers, which action would likely prevent the barrier from closing,” the complaint states, describing the group’s coordination. “Shortly after Kuehne obstructed the path of one door with the podium, Colon grabbed a chair and placed it in the path of a separate barrier.”

The female member of the group was proud of her contribution, prosecutors say.

The FBI says it learned through an anonymous tip of about a compilation of three videos on Felicia Konold’s Snapchat account boasting about their work, and the bureau authenticated it by comparing it with the photograph on her Twitter page. Her celebratory lap is quoted in detail by authorities.

The one thing I learned today…
[Barks, Barks]
[Laughs]
I’m watching the news guys
Fuuuck
Dude, I can’t even put into words. I. I. Never.
I never could [unintelligble] have imagined having that
much of an influence on the events that unfolded today.

[Laughs]
Dude, people were willing to follow. You fucking lead, and
everyone had my back, dude, everyone, fucking wall, legit,
in the air, up against the fence, [unintelligible], three lines of
police, fence, me, not even on the ground, my feet weren’t
even on the ground, all my boys, behind me, holding me up
in the air, pushing back.
[Laughs]
We fucking did it.

Boasting about having been “recruited into a fucking chapter from Kansas City,” the woman in the Snapchat video allegedly claims that she is “with them now.”

“During the video post, the speaker displayed a two-sided ‘challenge coin’ that appears to have markings that designate it as belonging to the Kansas City Proud Boys,” the complaint states. 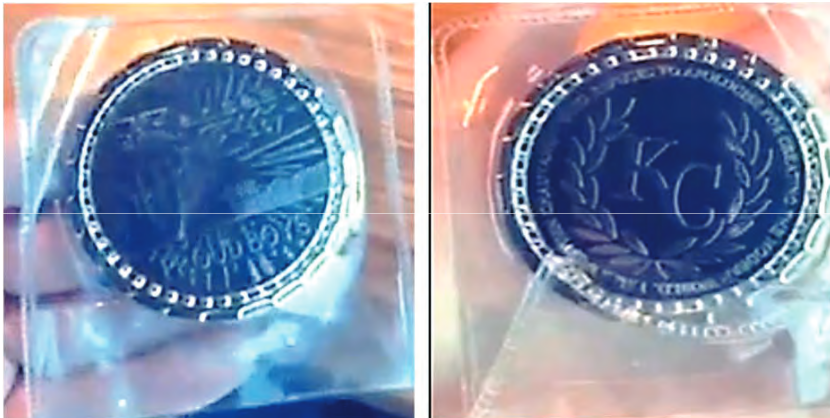 All five have been charged with conspiracy, civil disorder, obstruction of an official proceeding, knowingly entering a restricted building, and disorderly conduct on Capitol grounds. House impeachment managers concluded their opening statements on Thursday afternoon.