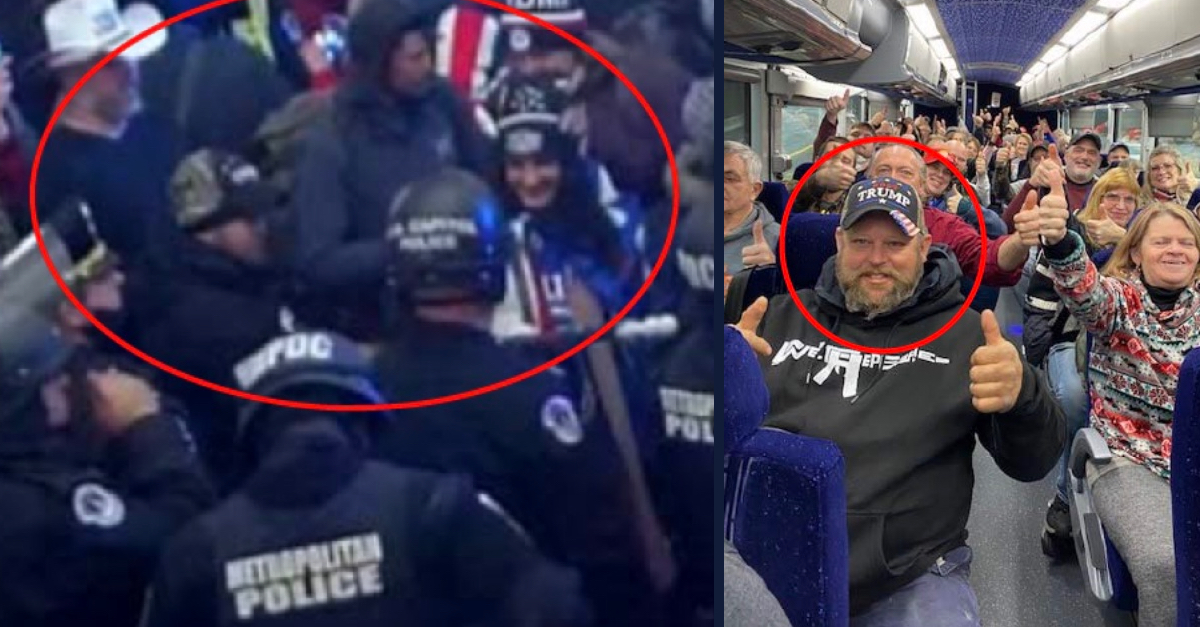 Left: Mark Aungst and co-defendant Tammy Bronsburg are seen inside the Capitol on Jan. 6. Right: Aungst, circled in red, is seen on a chartered bus before leaving for D.C. (Images via FBI court filings.)

A Pennsylvania man who had pleaded guilty to a misdemeanor in the Jan. 6 attack on the U.S. Capitol has died by suicide.

Court filings show that Aungst had pleaded guilty in June to one count of parading, demonstrating, or picketing in a Capitol building, a misdemeanor punishable by up to 6 months in jail and a $5,000 fine. He had come to Washington on a chartered bus from Pennsylvania to the Capitol in order to attend Donald Trump’s so-called “Stop the Steal” rally.

Aungst and his co-defendant, Tammy Bronsburg, admitted to entering the building at around 2:45 p.m., some 30 minutes after the initial breach, and leaving 30 seconds later. They re-entered the building at around 3:05 p.m. and spent about 10 minutes inside, taking pictures and video. They encountered law enforcement and were told to leave. Neither had been accused of assault or property destruction.

Aungst’s plea agreement did not contemplate a sentence range, but many Jan. 6 defendants who have pleaded guilty to this charge have received sentences significantly below the statutory maximum.

His sentencing was set for Sept. 27.

Bronsburg has also pleaded guilty to the parading and picketing charge. Her sentencing is set for the same September date.

Aungst, a gas field well service technician, is survived by his mother, a daughter and three siblings, PennLive reported.

His lawyer did not immediately respond to Law&Crime’s request for comment.

Aungst’s death is believed to be the third suicide among Jan. 6 defendants. Christopher Stanton Georgia, 53, of Fulton County, Georgia, died from a self-inflicted gunshot wound days after the Capitol siege. He had been charged with unlawful entry, a misdemeanor. Matthew Perna, 37, apparently died by suicide in February, weeks ahead of his sentencing on felony obstruction and other charges to which he had pleaded guilty.

At least three Jan. 6 defendants with pending cases have died from other causes: Joseph Cable Barnes, 35, of Texas, died in June of 2021 reportedly after running a red light while on his motorcycle; John Steven Anderson, 61, of Florida died in September 2021; and Michael John Lopatic, Sr., 57, who was accused of assaulting a police officer with an “uppercut,” died earlier this month.

The deaths of five police officers, including four by suicide, have been linked to the Jan. 6 Capitol attack, when scores of Trump supporters besieged the building as Congress was certifying Joe Biden’s win in the 2020 presidential election. Some 150 officers were reportedly injured. Rioters were successful in pausing the count for hours, forcing lawmakers and staff to either evacuate the building or shelter in place.

Four Trump supporters in the crowd also died that day.