Ohio Man Who Said ‘Antifa’ Was Responsible for Jan. 6 Pleads Guilty to Storming the Capitol 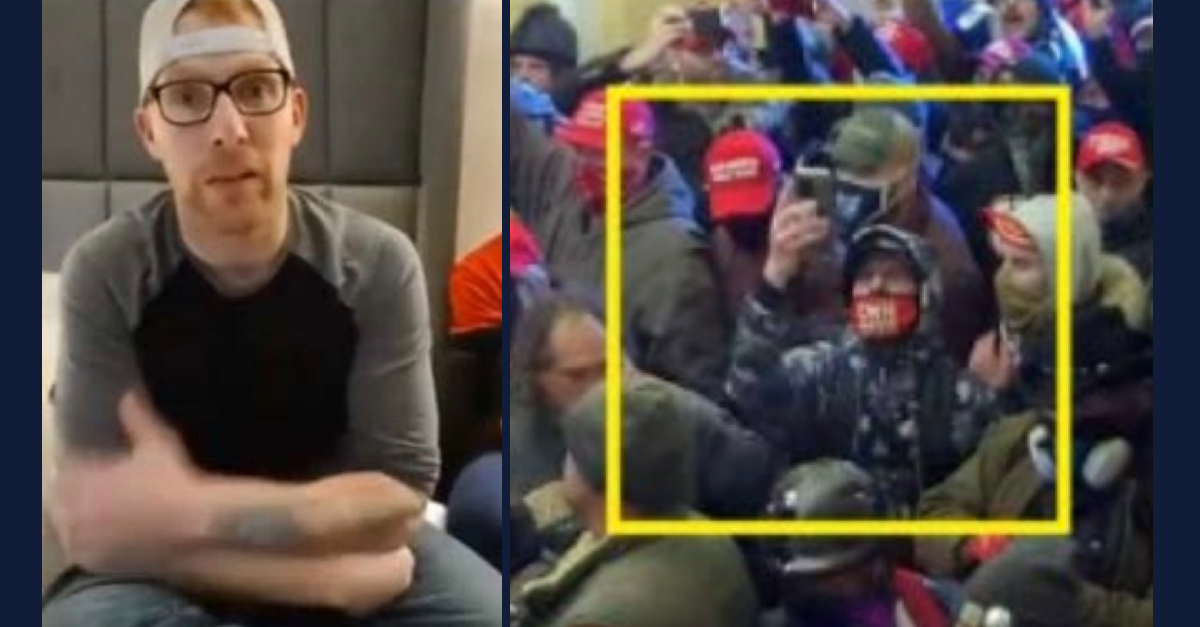 Left: Stephen Ayres speaking on a YouTube video about Jan. 6; right: seen on surveillance footage from inside the Capitol on Jan. 6 (images via FBI court filing).

An Ohio man who claimed to believe that the Jan. 6 attack on the U.S. Capitol was “all Antifa” has pleaded guilty to storming the building.

Stephen Michael Ayres, 39, admitted Wednesday to engaging in disorderly and disruptive conduct in a restricted building or grounds on Jan. 6. He acknowledged that he had traveled from Ohio to Washington, D.C. in order to attend Donald Trump‘s so-called “Stop the Steal” rally, during which the former president told thousands of supporters to march to the Capitol to “demand” that Congress not certify Joe Biden’s 2020 electoral win.

Ayres did exactly that.

According to prosecutors, Ayres entered the Capitol through the Senate Wing doors at around 2:51 p.m., after a makeshift barricade set up by Capitol police had been breached by other rioters. He remained inside the building for around 10 minutes.

The next day, Ayres was featured in a video posted to YouTube in which he and two other people were talking about Jan. 6.

“It’s not over, trust me,” a man—not Ayres—on the video said. “The purpose of today was to expose [then-Vice President Mike Pence] as a traitor.”

“The American people are not going to let this slide, especially after today,” a woman on the video said.

“Yup,” Ayres responded, adding that “fake news” media would not accurately report on what happened at the Capitol, but that they had “seen it all” and gathered “footage all over the place on the Capitol.”

Top law enforcement officials have said that they “have not seen evidence” that members of Antifa—a decentralized collection of activists who hold what they describe as “antifascist” views—or “fake” supporters of the former president participated in the Jan. 6 riot.

Ayres had signaled his intentions prior to Jan. 6 in various Facebook posts.

“History is being made right in front of your eyes!” he wrote on Jan. 2, 2021. “When your grandchildren ask ‘Where were you when………..happened?’ What’s your answer going to be?”

Attached to that post was an image of a poster stating: “January 6th Washington, DC, the president is calling on us to come back to Washington on January 6th for a big protest – ‘Be there, will be wild.'”

“All are now put on notice by ‘We The People!'” he wrote.

Ayres was charged in February 2021 alongside Matthew Perna, who stormed the Capitol and stayed inside for about 20 minutes on Jan. 6, taking video on his cell phone and chanting with the crowd.

Perna pleaded guilty in December to obstruction of Congress, a felony technically punishable by up to 20 years in prison, and three related misdemeanor charges. He died by suicide in late February, weeks before he was set to be sentenced.

U.S. District Judge John Bates told Ayres that he knows that the situation is “extra difficult because of what happened to your co-defendant.”

“I express my condolences to you,” the judge, a George W. Bush appointee, added.

“Thank you, your honor,” Ayres said.

The disorderly conduct misdemeanor to which Ayres pleaded guilty carries a potential one-year jail sentence, but the plea agreement estimates a recommended range of 0-6 months based on Ayres lack of criminal history and the fact that he isn’t accused of engaging in physical violence.