Jan. 6th Rioter Caught on Bodycam Ramming Police with One of Their Shields Has Been Convicted of Assaulting Law Enforcement 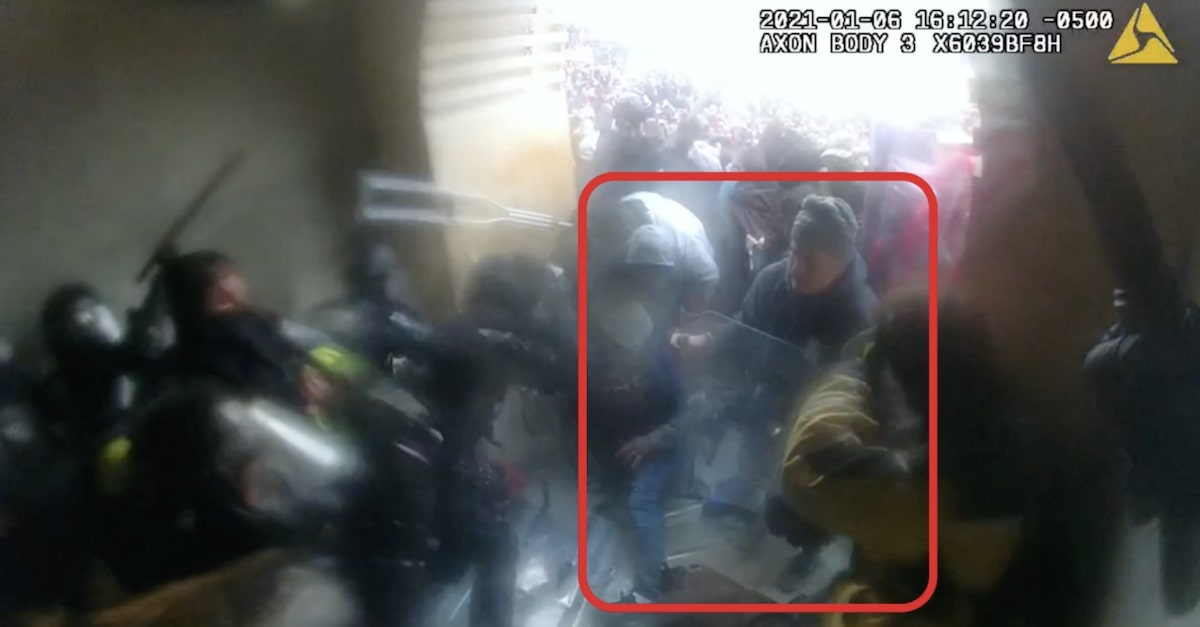 A Massachusetts man who was caught on tape taking a riot shield and using it to ram police defending the U.S. Capitol on Jan. 6th has been convicted of assaulting law enforcement.

Vincent J. Gillespie, a 61-year-old from Athol, Massachusetts, was found guilty on Friday of multiple felony and misdemeanor charges, including assaulting, resisting, or impeding officers; civil disorder; engaging in physical violence in a restricted building or grounds; and act of physical violence in the Capitol grounds or buildings.

The Department of Justice’s announcement Gillespie’s conviction falls one day after the Jan. 6th Committee released their massive report into the attack on the Capitol.

Arrested in his hometown earlier this year on Feb. 18, Gillespie engaged in what has been widely been described as the tunnel battle with officers in the Lower West Terrace of the Capitol. It was the site of some of the worst violence in the Capitol attack.

From between at least 4:11 p.m. to at least 4:25 p.m., Gillespie joined the mob of former President Donald Trump’s supporters who were “pushing, shoving, yelling, and fighting” with police there, the FBI says.

Gillespie counts himself among one of nearly 900 people on the Justice Department’s sprawling Jan. 6th docket — and one of more than 275 charged with assaulting or impeding law enforcement.

One of the appendices to the Jan. 6th Committee’s report lays out more statistics from the D.C. Fire and Emergency Medical Service Department (DC FEMS) illustrating the violence that day.

“DC FEMS statistics help describe the scope of the January 6th riot at the Capitol,” the report states. “Over the course of the day, DC FEMS reported 22 EMS responses, 14 EMS transports, including two cardiac arrests and two critical injury transports. There were an estimated 250 injured law enforcement officers from numerous agencies.One hundred-fourteen USCP officers reported injuries. Five police officers who were at the Capitol on January 6th died in the days following the riot.”

Authorities say that multiple clues went into Gillespie’s identification, with the original tip being his clothing. The FBI says he wore a sweatshirt with the logo of Berkshire Nautilus, a fitness club in Pittsfield, Massachusetts. The FBI also says that six witnesses identified Gillespie, including his former neighbor.