‘I Believe I’m Innocent’: Plea Agreement Hearing for Right-Wing Livestreamer ‘Baked Alaska’ Goes Up in Flames As He Declares His Innocence, Says Feds Pressured Him to Plea 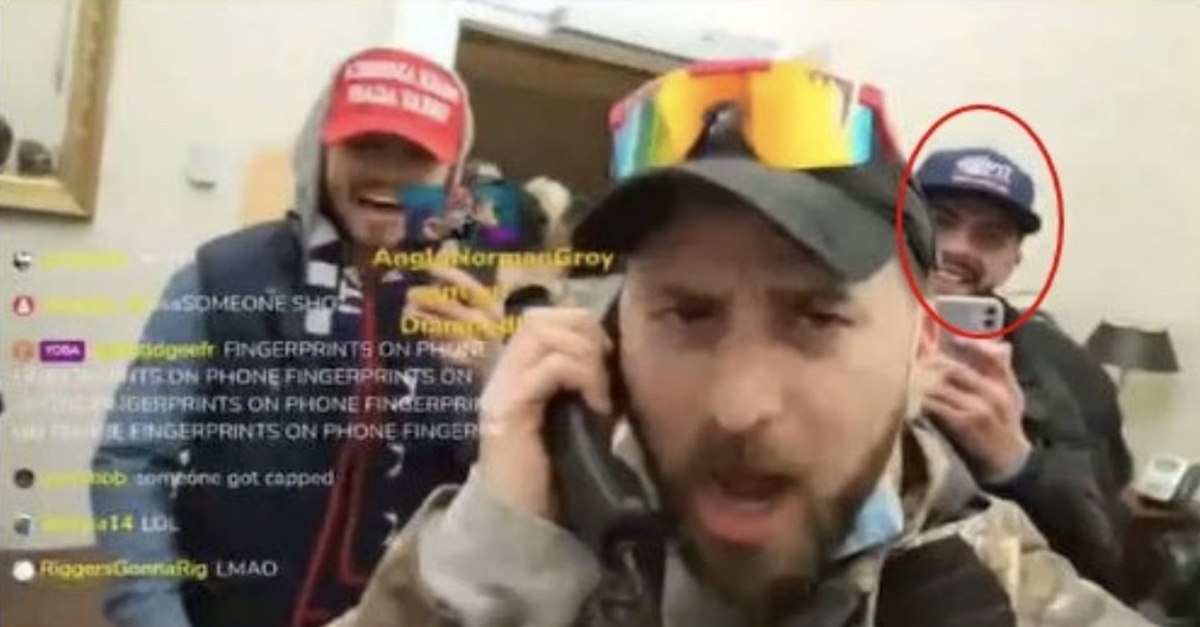 Anthime Gionet, the right-wing social media personality known as “Baked Alaska,” seen livestreaming from inside the U.S. Capitol on Jan. 6. (Antonio Ferrigno, a defendant in a different Jan. 6 case, is circled in red.) (Images via FBI court filing.)

A plea agreement hearing for the right-wing online personality known as “Baked Alaska” — who livestreamed video from inside the U.S. Capitol on Jan. 6 — veered off the rails when the defendant told the judge that he wasn’t actually guilty.

Anthime Gionet, having joined the mob of Donald Trump supporters who swarmed the Capitol shortly after Congress started certifying the 2020 election results, livestreamed for about 30 minutes as he roamed the Capitol building on Jan. 6. Prosecutors say he streamed the video on the “DLive” platform and later posted to YouTube and Twitter.

Gionet, who was seen on his own video not wearing a mask, later tested positive for Covid-19.

On Jan. 7, he was charged with entering and remaining in a restricted building or grounds and violent entry and disorderly conduct on Capitol grounds.

“Don’t Plead Guilty to Please Me!”

On Wednesday, Gionet appeared poised to plead guilty to a single misdemeanor charge before Senior U.S. District Judge Emmet Sullivan. That charge — Parading, Demonstrating, or Picketing in any U.S. Capitol Building — carries a potential six-month jail sentence, up to five years of probation, and a fine of up to $5,000.

The plea was first signaled on April 19, when prosecutors filed an information charging Gionet with the offense. The filing of an information often indicates a pending plea agreement. A status conference scheduled for that day was vacated and moved to Wednesday, when Gionet was expected to officially plead guilty.

In a moment that perhaps seems prescient in hindsight, Sullivan warned the defendant right after he was sworn in that he would be penalized if he lied while under oath.

“You can get yourself in trouble by not speaking truthfully, do you understand that?” Sullivan, a Bill Clinton appointee, asked.

“Why do you wish to plead guilty?” Sullivan asked.

This is normally the point during plea agreement hearings at which a defendant will acknowledge their guilt. Not so for Gionet, who apparently had taken Sullivan’s warning to heart.

“Well, I wanted to go to trial, but the prosecutor said if I didn’t go to trial they would put a felony on me, so I think this is probably the better route,” Gionet said.

“Let me ask you this question: are you pleading guilty because you’re guilty?” Sullivan asked.

“Well then we have to pick a trial day,” Sullivan said, immediately slamming the breaks on the proceeding. While Gionet started to speak, Sullivan spoke over him.

“You just told me you’re innocent,” he said. “I can’t take your plea.”

Amid crosstalk, Assistant U.S. Attorney Elizabeth Aloi spoke up to ensure that Gionet’s allegation—that prosecutors had pressured him to take a plea—didn’t go unanswered.

“The government did not say that we would charge Mr. Gionet with a felony if he did not take the plea,” Aloi said. “We did say that the case would continue to be investigated,” she added, noting that the investigation could lead to felony charges.

“I accept that representation,” Sullivan said quickly. “Your office has acted very honorably. I didn’t believe that when I heard it. So let’s pick a trial date.”

When it seemed the parties had agreed on a trial date — March 7, 2023 — and the hearing was about to end, Sullivan suggested that Gionet talk privately with his attorneys.

“Let me say one thing before we start down a million-mile journey,” Sullivan said, alluding to the trial 2023 trial date and suggesting that Gionet and his lawyers, who were all appearing by video due to the ongoing coronavirus pandemic, meet in a virtual breakout room.

“I’m never going to force anyone to plead guilty if he’s not guilty,” the judge continued. “Never. The attorneys don’t know me in this case. The attorneys in D.C. know me, the attorneys in the federal bar know me. If Mr. Gionet wants to go to trial, he’ll get a fair trial regardless of the charges.”

Sullivan told Gionet’s lawyers Joseph Scrofano and Zachary Thornley that he wasn’t trying to “put his thumb on the scale” and that he was well aware that as a judge, he is obligated not to involve himself in plea negotiations.

“I’m not trying to trick you,” Sullivan said to the lawyers, before addressing Gionet directly.

After some 20 minutes of speaking privately, Gionet and the lawyers asked to speak with Aloi, also off the record. Moments later, Aloi returned and told Sullivan that the government had agreed to keep the plea offer open for another 60 days, after which time the offer would expire.

“We Ain’t Leaving This Bitch.”

Gionet, who used to work for BuzzFeed, is known for pushing white supremacist talking points and pro-Nazi ideology. He reportedly shared images of a restaurant receipt showing a tip of $14.88, which is neo-Nazi code incorporating two popular Nazi references: the so-called “14 words” slogan, implying violence in the name of securing “a future for white children,” and the number 88, which stands for “Heil Hitler,” with H being the eighth letter of the alphabet.

After recording himself saying the right-wing buzzwords often heard by those who stormed the Capitol that day—including such comments as “Patriots are in control,” “Whose house? Our House,” and “1776 baby”—Gionet allegedly declined an offer to leave the building.

“I’m staying,” he said, apparently determined to visit other parts of the Capitol. According to prosecutors:

Investigators say that it was fairly easy to identify him.

“The defendant is a known social media personality and is thus recognizable,” the charging documents said.

But Gionet’s popularity within far-right circles may have ended up working to their disadvantage: at least four other Jan. 6 defendants were identified in his livestream from the Capitol that day.

Toward the end of the hearing Wednesday, Gionet expressed his gratitude to the judge.

“Thank you for the additional time,” he told Sullivan. “I appreciate it.”

Sullivan set the next status conference for July 22.