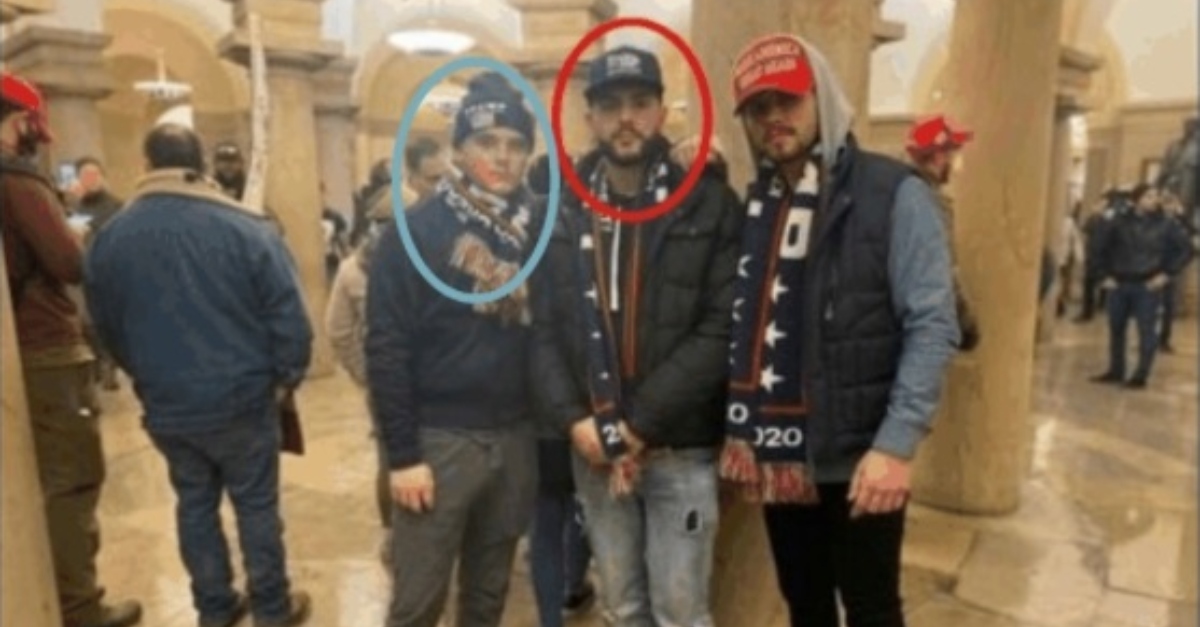 Two men from Brooklyn, New York, have been charged with allegedly storming the U.S. Capitol on Jan. 6, allegedly foiled based in part on their appearance in a video by the far-right and reportedly then-COVID-positive live-streamer known as “Baked Alaska,” federal prosecutors said on Tuesday.

Antonio Ferrigno Jr. and Francis Connor were among the mob who broke into the building while Congress was trying to certify the electoral college votes for the 2020 presidential election winner Joe Biden, according to an FBI affidavit. Supporters of then-President Donald Trump breached the premises, spurred on by what has been dubbed the “Big Lie” that Democrats stole the race through fraud.

Both are 20-something Brooklynites. pic.twitter.com/lfTDNvd9N4

Investigators placed Ferrigno and Connor at the scene by citing a photo from the Instagram account of co-defendant Anton Lunyk, surveillance footage, and even a livestream from another co-defendant, far-right streamer Anthime Gionet, a.k.a. “Baked Alaska.”

A former BuzzFeed employee, Gionet’s parroting of white supremacist tropes caught the eyes of extremism watchdogs at the Anti-Defamation League. The group reported that Gionet once posted a receipt at a restaurant showing a tip for “$14.88,” a neo-Nazi code for the so-called “14 words” about propagating white children and “Heil Hitler,” words that begin with the eighth letter of the alphabet.

Arrested and charged shortly after the attack, Gionet’s stream contributed to the arrests of multiple Jan. 6 defendants—now including Ferrigno. The far-right streamer’s alleged antics also put a spotlight on the risk of COVID-19 transmission within the closed environs of the U.S. Capitol.

Embedding a still from Gionet’s stream in the affidavit, authorities circled Ferrigno in red. The images below allegedly show them in Gionet’s stream from inside the Capitol building. 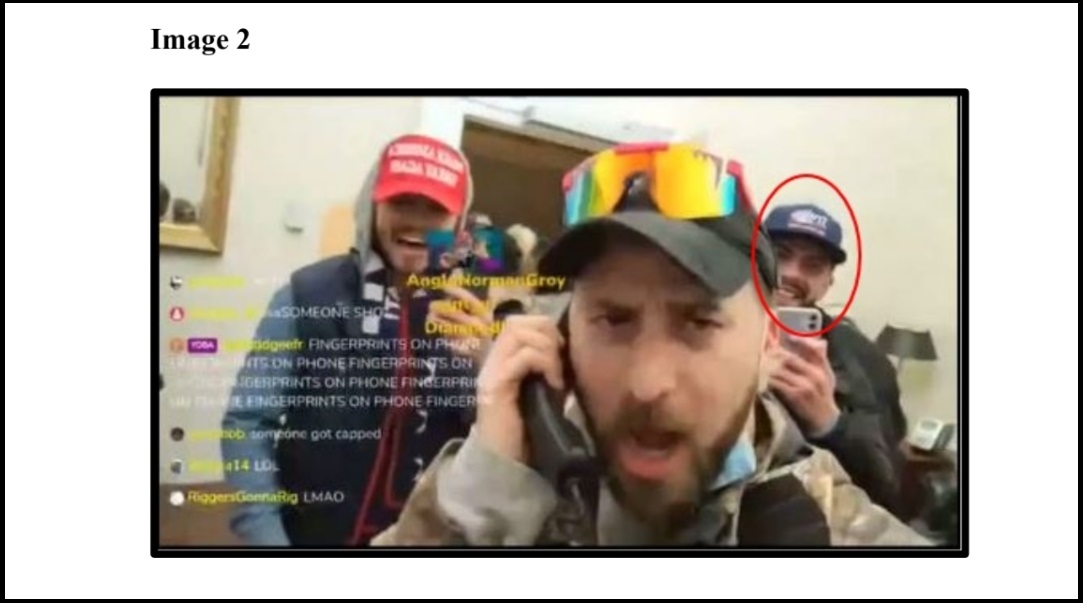 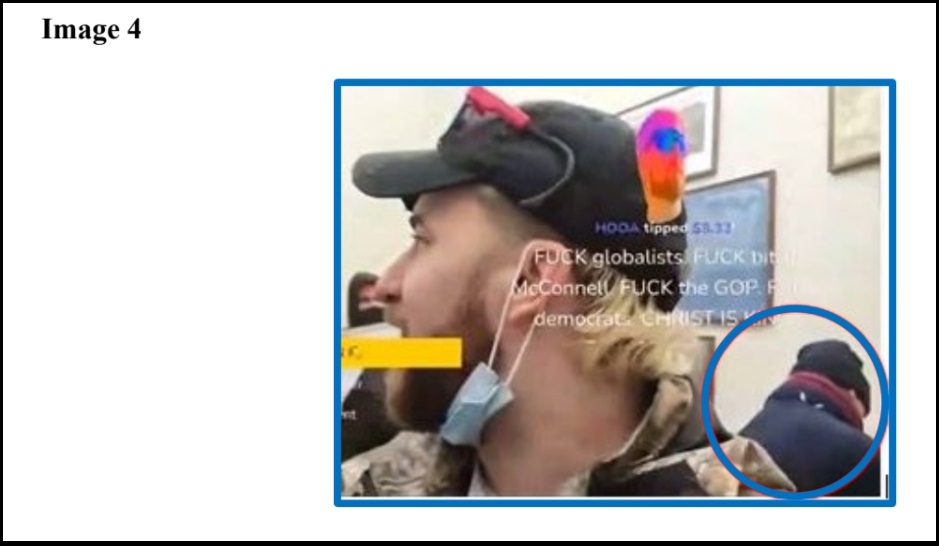 This image is allegedly from Lunyk’s Instagram’s account, showing Connor circled in blue and Ferrigno in red. 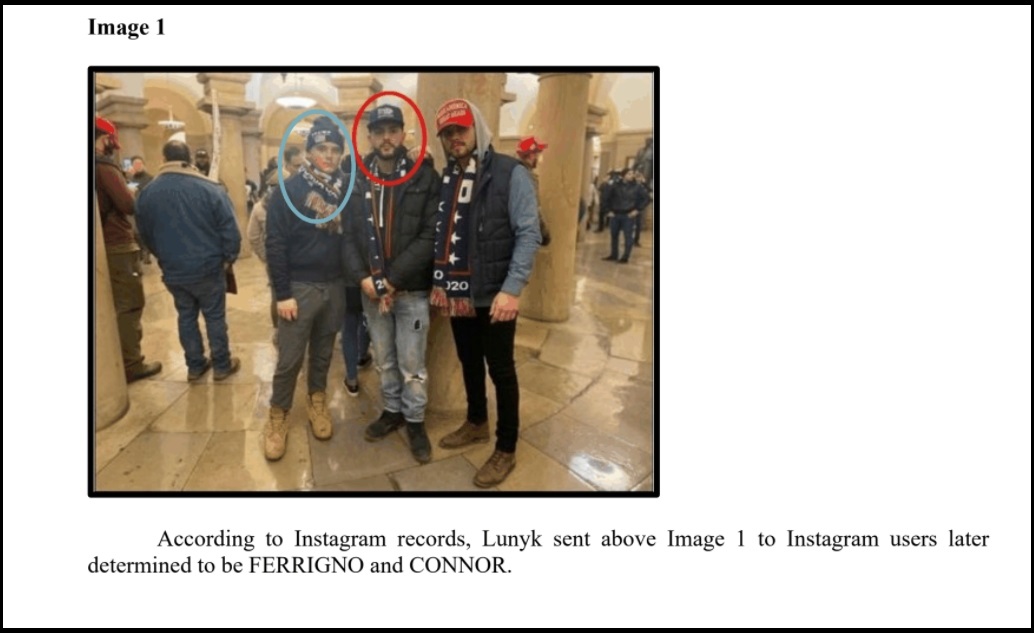 Surveillance footage shows both Ferrigno and Connor walking around the Capitol with Lunyk, the FBI said. Texts from Lunyk’s phone shows messages between the three, investigators said.

Ferrigno allegedly wrote on Jan. 7 that he was not in the capitol but texted five days later: “WE WERE FORCED INTO THE CAPITOL.”

On Jan. 7, Lunyk texted Ferrigno a New York Post article reporting that “Baked Alaska” had COVID-19 when he stormed the Capitol, but Ferrigno denied that he would have been exposed, according to text messages embedded in the affidavit.

“He was also COVID +,” Ferrigno wrote.

Law&Crime sent requests for comment to email accounts which the FBI says belong to Ferrigno and Connor. They did not immediately respond. It’s unclear at this time if they have attorneys in this matter.