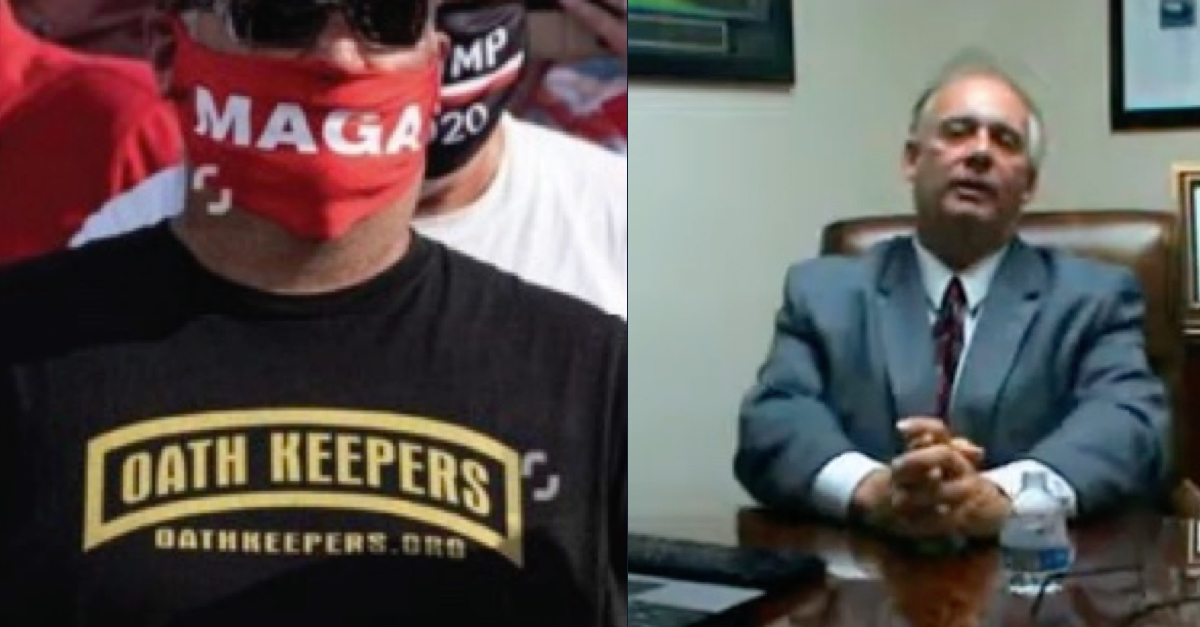 The now-disbarred attorney for a right-wing militia member charged with seditious conspiracy in the Jan. 6 Capitol attack is apparently having trouble finding a replacement.

Jonathon Moseley, whose insistence on pushing COVID-19 vaccine conspiracy theories in court earned him a serious rebuke from a federal judge, lost his license to practice law in Virginia on April 5.

That presented a problem for his client Kelly Meggs, a member of the right-wing Oath Keepers militia group charged with seditious conspiracy in connection with the Jan. 6 attack on the U.S. Capitol building. Prosecutors say that Meggs, along with Oath Keepers leader Stewart Rhodes and others, conspired to keep Donald Trump in the White House by force after his loss to Joe Biden in the 2020 presidential election.

During a hearing before U.S. District Judge Amit Mehta on Friday, Moseley said that he hasn’t been able to secure a new lawyer for his client.

Moseley said that his office had reached out to Dan Crone, the New Mexico lawyer who secured an acquittal for Matthew Martin before U.S. District Judge Trevor McFadden, but he had not received a response.

“I thought from his office there was a lot of interest,” Moseley said. “But I understand that he has not responded.”

Moseley indicated that he has exhausted nearly all his contacts in trying to get a new lawyer for Meggs.

“I’ve already asked everybody I know in the past, so I don’t know anything further, except we’re trying to generate some leads and talk to them,” Moseley said.

Moseley said he wasn’t sure if Meggs would qualify for a taxpayer-funded public defender or private lawyer appointed under the Criminal Justice Act.

For his part, Meggs, who is in custody, told Mehta that he hadn’t been able to secure representation largely due to restricted access to communication, despite Mehta having requested that accommodations be made.

“They have made no accommodations at all,” Meggs said. “They haven’t helped me in any way, shape, or form.”

Meggs added that his wife, Connie Meggs, who is accused in a different Jan. 6 case with other members of the Oath Keepers, is not allowed to access the internet while on pretrial release, so she hasn’t been able to help him.

“She can’t look anybody up,” Meggs said, adding that the couple’s sons have been doing much of the legwork.

Mehta said he was “disappointed” to hear that Meggs was having trouble finding new representation, as he had been assured by jail authorities that he wouldn’t have to “jump through all the usual hoops,” and that he found the entire situation “very frustrating.”

Moseley, meanwhile, appears to have not pulled back on representing Meggs. He filed several motions in the days following his disbarment, including a motion for Meggs’ release from pretrial detention and a motion to dismiss in which he called the seditious conspiracy charge and other allegations “thought crimes.”

When Moseley had indicated that he wouldn’t stop filing motions, Mehta ordered him to stop doing just that.

“Counsel for Defendant Kelly Meggs, Jonathon Moseley, shall refrain from filing any additional motions on behalf of Defendant Meggs while action on Mr. Moseley’s bar status before this District Court remains pending,” Mehta said in a minute order on April 13. “At this juncture, Mr. Moseley remains only caretaker counsel until successor counsel enters an appearance.”

While the docket doesn’t indicate that Moseley has filed any motions since Mehta’s order, prosecutors say that he has sent multiple emails that indicate Moseley is still trying to move forward with the case.

“Mr. Moseley has sent us eight emails making several demands, some of them quite outlandish,” Assistant U.S. Attorney Jeffrey Nestler told the judge. “We have not responded to any of the messages.”

Mehta reminded Moseley that he is no more than “caretaker counsel” for Meggs and that his primary role now was “assisting in the transition” to whoever will take over Meggs’ case.

Mehta rejected Moseley’s position that he was only trying to keep the momentum going in the case so that the new lawyer wasn’t needlessly delayed.

“A new lawyer will come in at some point, and that lawyer will make judgments for Mr. Meggs,” Mehta said. “He or she may not share the same views.”

“I thought I had made it clear what my view was as to your role for the time being,” Mehta added, again reminding Moseley that he was only “caretaker counsel” at this point.

Mehta set another status conference on the issue of Meggs’ representation for May 4.