Disbarred Lawyer for the Oath Keepers Tries to Dismiss Seditious Conspiracy and Other Charges, Calls Them ‘Thought Crimes’ 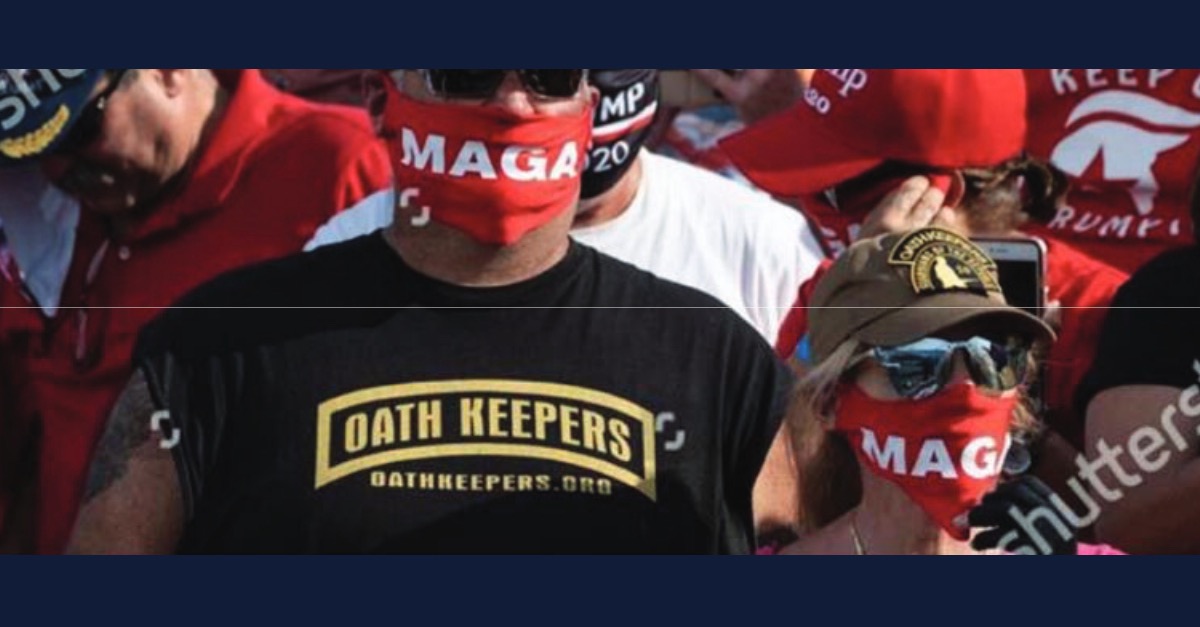 Kelly Meggs pictured on the left.

A disbarred lawyer for Oath Keepers leaders filed a motion to dismiss his seditious conspiracy count and other charges as Orwellian “thought crimes.” He also argued that the extremist group couldn’t have conspired to obstruct the presidential transfer of power because the U.S. Constitution doesn’t allow that.

The Circuit Court of Prince William County found that he violated a slew of professional rules, including those governing safekeeping property, candor toward the tribunal, fairness to opposing party and counsel, and unauthorized practice of law. That has not stopped Moseley from filing a 16-page missive about Meggs’ prosecution, strewn with block capital letters, boldface text and underlined text used seemingly only for emphasis.

Oath Keepers leader Elmer Stewart Rhodes and 10 other members have been charged with seditious conspiracy, obstructing an official proceeding, and other charges related to the Jan. 6 attack on the U.S. Capitol. Prosecutors say they “prepared to take up arms” at Rhodes’ direction and set up a so-called “quick reaction force” in a Virginia hotel.

If former President Donald Trump called them, prosecutors say, the Oath Keepers stood ready to ferry weapons from that Comfort Inn Balston across the Potomac River to fight in Washington, D.C. Their defense attorneys claim they had the right to act as Trump’s militia if he invoked the Insurrection Act.

Moseley argues it would have been legal for the Oath Keepers to ask Trump to call them as his personal armed militia.

“There can be no seditious conspiracy asking the President to lawfully use in a lawful way a power entrusted to the President by a statute properly enacted by the U.S. Congress,” he wrote.

Trump never did, and Moseley claims that his client is being blamed for the violence of other people on Jan. 6.

“Obviously, this cannot transform the violence or damage perpetrated by others into acceptable or protected by the First Amendment,” Moseley conceded.

“But these Defendants are not charged with violence or damage to property,” he added, in bolded and italicized text.

Despite that emphasis, five of the defendants are charged with destruction of government property and aiding and abetting, including Moseley’s client, Meggs. The indictment does not elaborate much on that charge, except to say that they “willfully injure[d] and commit[ed] depredation against property of the United States that is, the United States Capitol building.”

A federal judge has warned Moseley before about his “bombastic” filings, when the attorney compared COVID-19 vaccines to the Holocaust.

“The court will not allow this case to become a forum for bombastic arguments […] or propagating fringe views about COVID-19 or vaccinations,” U.S. District Judge Amit Mehta wrote in November, telling Moseley and his co-counsel Brad Geyer not to file a document with the proposed chapter heading “SCOTUS Could Not Have Foreseen the Holocaust.”

In another passage, Moseley insists that his client couldn’t have tried to disrupt the peaceful transfer of power—because the Constitution forbids it.

“A president’s term ‘shall’ end at noon on January 20 every four years,” Moseley wrote. “Not maybe. Not if. It ‘shall’ end. This Constitutional requirement is self-executing. A president at 11:59 P.M. ceases to be President at 12:01 P.M. (technically 12:01 P.M. plus 1 second) on the fourth January 20 (counting the first January 20 inclusively) since his or her term began.

“There is nothing in heaven or Earth that can stop the transfer of presidential power, nothing in the universe, that can add 1 minute to a President’s term of office,” his brief continues. “Not even God making the sun (appear) to stand still would keep a President in office 1 second longer because even if the Earth stopped rotating, it would still be 12:01 P.M. one minute after noon.”

The seditious conspiracy count does not require divine intervention to disrupt the U.S. constitutional order, nor does it require that the democracy actually cease functioning. It punishes attempts by two or more people to conspire “by force to prevent, hinder, or delay the execution of any law of the United States,” here, the peaceful transfer of power.

That attempt does not need to be successful for the law to be violated.

Read the dismissal brief, below: