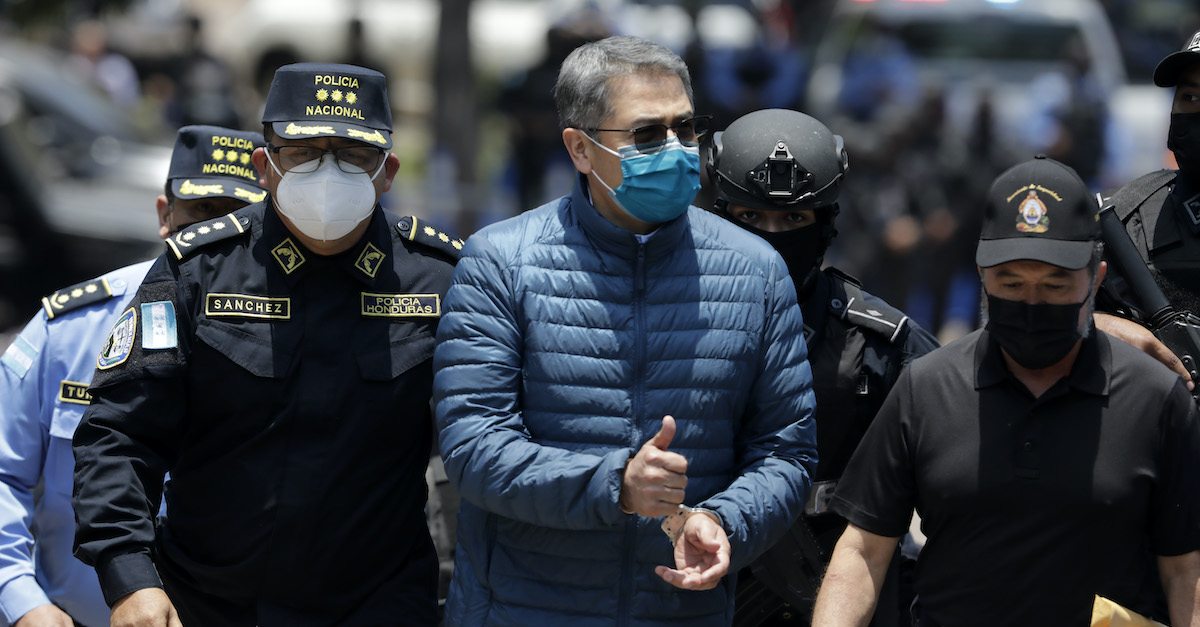 Former President of Honduras Juan Orlando Hernandez is escorted by Members of the Police Special Forces to be extradited to U.S.to face charges of taking bribes from drug traffickers at Honduran National Directorate of Special Forces on April 21, 2022 in Tegucigalpa, Honduras. Hernandez will stand trial for allegedly aiding the smuggling of hundreds of tons of cocaine to America.

Former President of Honduras Juan Orlando Hernández appeared for the first time in a U.S. court on Friday to answer charges that he accepted bribes from and gave protections to drug lords like Joaquín “El Chapo” Guzmán to run his country like a “narco-state.” At the hearing, Hernández was read his rights, and a federal judge kept him jailed pending trial.

Hernández’s indictment alleges that the conspiracy lasted between 2004 and 2022.

Represented by attorney Raymond L. Colon, Hernández was extradited to the United States and landed on U.S. soil at approximately 12:50 a.m. on Friday, prosecutors say. He was provided with a Spanish interpreter. Colon did not oppose his pre-trial incarceration, but he reserved the right to enter a bail application at a later date.

Announcing the ex-head of state’s extradition on Thursday, U.S. Attorney General Merrick Garland declared: “The Justice Department is taking a comprehensive approach to protecting our communities and our country from violent crime. The Department is committed to disrupting the entire ecosystem of drug trafficking networks that harm the American people, no matter how far, or how high we must go.”

A former two-term president of his country, Hernández was described as one of former U.S. President Donald Trump’s “valued and proven partners” in advancing his agendas on crime and immigration.

Manhattan U.S. Attorney Damian Williams said in a statement that Hernandez partnered with “some of the world’s most prolific narcotics traffickers to build a corrupt and brutally violent empire based on the illegal trafficking of tons of cocaine to the United States.”

“Hernández is alleged to have used his vast political powers to protect and assist drug traffickers and cartel leaders by alerting them to possible interdictions, and sanctioning heavily-armed violence to support their drug trade,” Williams added.  “I commend the career prosecutors of the Southern District of New York for their tireless efforts to disrupt the entire illicit drug-trafficking ecosystem, from street-level dealers to a former world leader, and everything in-between.”

According to the indictment, Hernandez benefited from his ties with cartel leaders in many ways.

“Hernandez used those drug- trafficking proceeds to enrich himself, finance his political campaigns, and commit voter fraud, including in connection with the 2013 and 2017 Honduran presidential elections,” the indictment alleges, adding that the ex-president protected his brother and former member of the Honduran National Congress Juan Antonio Hernández Alvarado from investigation, arrest, and extradition.

Also known as Tony Hernandez, that ex-presidential sibling was also prosecuted in the Southern District of New York, where he was convicted and sentenced to life imprisonment last year.

“In the process, Juan Orlando Hernández, a/k/a ‘Joh,’ the defendant, abused his position as the president of Honduras to operate the country as a narco-state, in order to enrich himself and corruptly gain and maintain power; corrupted the legitimate institutions of Honduras , including parts of the Honduran National Police, military, and National Congress; and, while publicly purporting to be an ally of the United States, contributed with his co-conspirators to Honduras becoming one of the largest transshipment points in the world for United States-bound cocaine,” the indictment states.