Derek Jancart Will Spent 45 Days in Jail for Jan. 6 Breach

Air Force Veteran and His Friend Will Spend 45 Days Behind Bars for Breaching the U.S. Capitol on Jan. 6 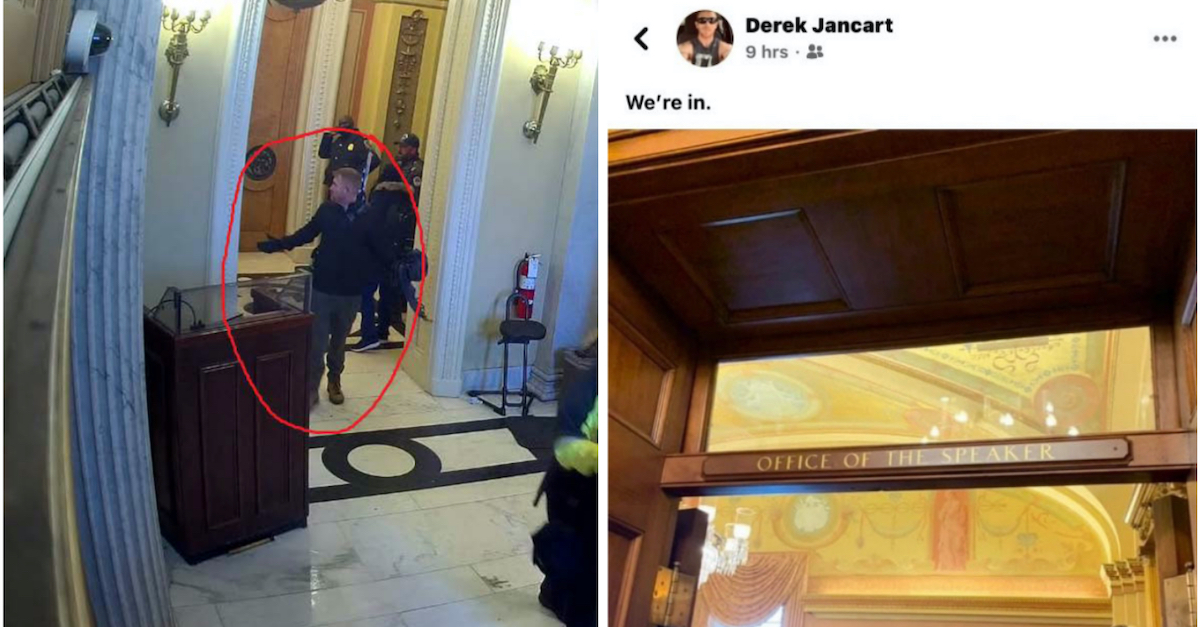 An Air Force veteran who posted a photograph of a door next to House Speaker Nancy Pelosi’s conference room with the caption “We’re in” will spend 45 days behind bars for his conduct on Jan. 6, a federal judge ruled on Wednesday.

“I greatly respect your military service on behalf of this country, particularly in Afghanistan,” U.S. District Judge James E. Boasberg, a Barack Obama appointee, told the defendant, telling him that there were both aggravating and mitigating circumstances to his case.

Acknowledging that the sentence might strike many as light, Boasberg added that even a day in a federal correctional center is not “pleasant.” Jancart’s co-defendant Erik Rau received an identical sentence in proceedings that immediately followed. Neither faced accusations of violence or property damage.

Derek Jancart brought a gas mask and two-way radio to the U.S. Capitol on Jan. 6, though it is undisputed he did not use the mask.

“He swore an oath to defend the country,” Assistant U.S. Attorney Leslie Goemaat told a judge on Wednesday.

Instead, the prosecutor added, Jancart participated in an “attack on democracy itself.”

“I do apologize for my individual actions that day,” Jancart said. “I did get caught up in the moment.”

He claimed that he did not destroy anything inside the building and urged others not to, as well.”

“I have great reverence for the history of this country,” Jancart said. “I love this country.”

He is represented by Washington, D.C.-based attorney A. Eduardo Balarezo.

“We Have the Police Surrounded”

On July 23, Jancart and Rau pleaded guilty to one count of disorderly conduct in a Capitol building. Their respective plea agreements note the charge carries a maximum six-month sentence, but prosecutors requested four-month terms for both earlier this month. Their statements of offense admitting to their conduct describe the chaotic scene in which they participated during the siege.

After rioters broke through the police line and rushed up the stairs of the U.S. Capitol, Rau videotaped that moment and said on the video: “We made it up to the Capitol. … We have the police surrounded! We have you surrounded!”

“It really is a chilling, chilling incitement of violence,” Goemaat told the judge.

Prosecutors say that Rau wore tactical pants and a hat that said “I lubricate my guns with liberal tears.”

According to the statement of offense, others in the frame could be heard shouting “get him!” and “traitors gonna hang!”

Rau, whose sentencing has been scheduled immediately after Jancart’s at 11:30 p.m. Eastern Time, was quoted screaming: “Yeah! They just pushed through the guards!” 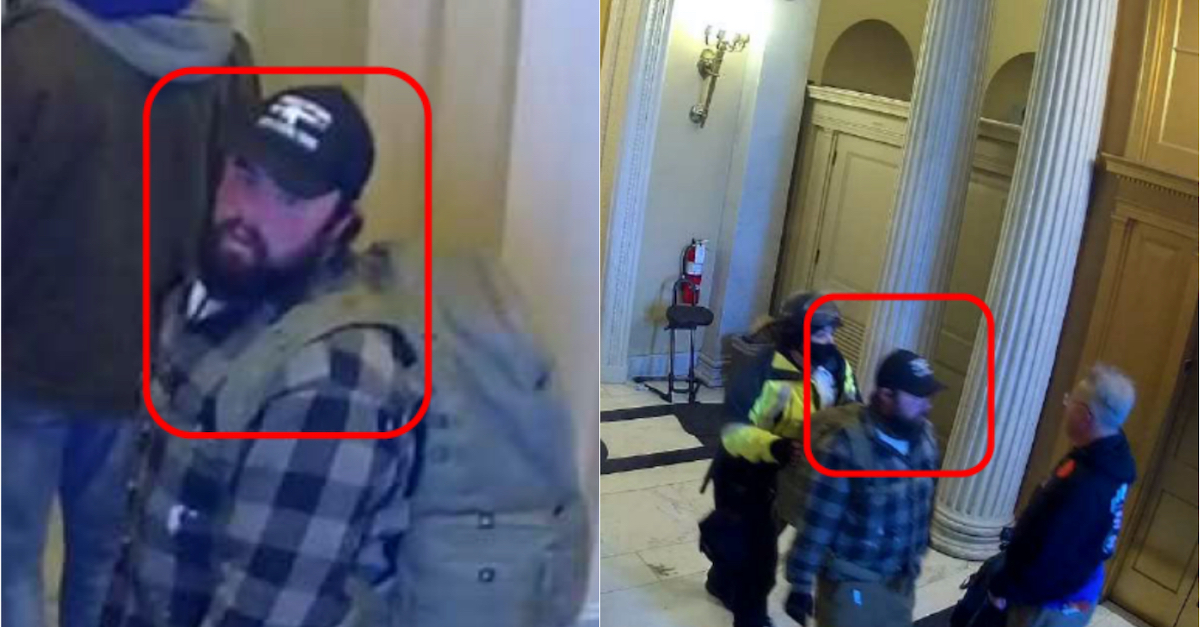 Jancart posted a video on Facebook of Rau making those comments, but his lawyer Balarezo claimed that did not imply endorsement.

“He didn’t engage in any violence. He did not break and enter,” Balarezo said, comparing his client’s posting of the video to sharing footage of George Floyd’s murder.

Judge Boasberg scoffed at the comparison.

Rau and Jancart entered the Capitol Building through the Senate Door and traveled through the Crypt.

“Nothing Short of Shocking”

After exiting there, the pair admittedly took the stairwell south of the Crypt to the second floor of the Capitol and walked towards the Speaker’s conference room. Rau concedes going inside that room while Jancart stayed outside to snap a photograph boasting about the breach that he posted on Facebook.

“During a voluntary proffer with the government, Rau admitted to hearing rioters in the Speaker’s conference room discussing breaking into glass cabinets and taking everything in it and hearing a rioter screaming to ‘shit on her desk,'” Rau’s sentencing memo states.

Court papers show that the pro-Donald Trump mob frequently targeted Pelosi on Jan. 6: One arrested woman is charged with stealing a laptop from her office. A man seen putting his foot on a desk in her office left a note calling her a “Biatch,” and several others allegedly threatened her.

Though prior U.S. Capitol breach sentences have ended in probation in cases involving guilty pleas, prosecutor Goemaat urged the judge not to follow that pattern here.

“While Jancart’s military service is laudable, it renders his conduct on January 6 all the more egregious,” Goemaat wrote in her sentencing memo. “As a former military member, Jancart was well aware that taxpayer status does not bestow upon a person the right to enter restricted government buildings. His voluntary decision to storm a guarded government building is nothing short of shocking in light of his former military service and training.”

She also quoted the admonition of Senior U.S. District Judge Royce Lamberth that the public should not expect non-jail sentences to be the norm.

“I don’t want to create the impression that probation is the automatic outcome here because it’s not going to be,” Lamberth said when sentencing 49-year-old grandmother Anna Morgan-Lloyd.

Rau’s lawyer Michelle M. Peterson said her client has a full-time job in a steel mill, takes care of his children and maintain the family farm. She argued that any jail time will be a burden on him and his family, urging an “alternative” to incarceration because of these circumstances.

If Rau were a “single man” with “nothing to lose,” a 45-day sentence like the one Jancart received would be preferable to probation, Peterson added.

Rau echoed those themes in an emotional address.

“I absolutely should have had my wife and my kids in mind,” Rau added later.

“You aren’t manufacturing tears,” he said. “This is real remorse. I know that.”

Ultimately, however, the judge found that he could not justify a different sentence than the one Jancart received.

(Photos via Department of Justice)