Capitol Stormer Who Said Jan. 6 Was the ‘Best Day Ever’ Writes Movie and Book Reviews of ‘Schindler’s List’ and ‘Just Mercy’ in Bid to Get Probation, Community Service 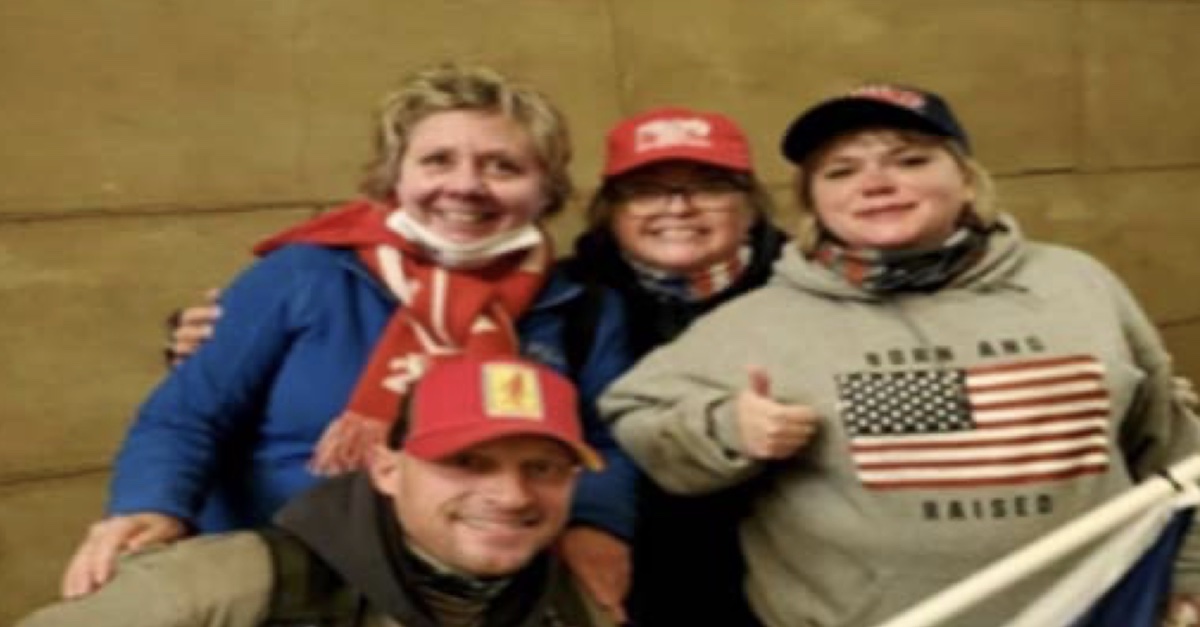 A photo that the FBI says shows Dona Bissey and Anna Morgan Lloyd inside the Capitol on Jan. 6, among others.

Anna Morgan Lloyd, a 49-year-old grandmother from Indiana who admittedly stepped foot inside the Capitol on Jan. 6, is asking a federal judge to sentence her on Friday to probation and community service as punishment for “Parading, Demonstrating, or Picketing in a Capitol Building.” In an apparent effort to make her case, Lloyd watched “Schindler’s List,” and read “Just Mercy” and “Bury My Heart at Wounded Knee,” as her attorney put it, to “educate herself about ‘government policy’ toward Native Americans, African Americans and European Jews.” Lloyd, who is pleading guilty to a misdemeanor offense, even wrote some book and movie reviews that were filed on the court docket Tuesday in an attempt to explain what she has learned since Jan. 6.

“I have had many political and ethical discussions with Anna Lloyd. I tendered a booklist to her. She has read ‘Bury My Heart at Wounded Knee,’ ‘Just Mercy,’ and ‘Schindler’s List’ to educate herself about ‘government policy’ toward Native Americans, African Americans and European Jews. We have discussed the books and also about the responsibility of an individual when confronting ‘wrong,'” defense attorney H. Heather Shaner explained. “She has viewed ‘Burning Tulsa’ on the History Channel, as well as the films ‘Just Mercy’ and ‘Mudbound.’ She watched part of the series on the U.S. Constitution, produced by the James Madison Montpelier Foundation. She did this to educate herself and to learn the American history she was not taught in school. She has worked hard to come to terms with what she believed before January 6th, 2021 and what she has learned since then.”

“She is a fine woman, who respects the rights of others and apologizes to the Court and our country for entering the Capitol—albeit through an open door,” Shaner continued. “She is terrified and awed by the power of the Court. She makes no excuses for having entered the U.S. Capitol and in retrospect would never ever have come to Washington in January, 2021. She begs the Court not to incarcerate her.”

From here, the attorney asked for a sentence that the defense claims has been agreed upon by the parties, namely the defense and the government.

“Probation, with 40 hours of community service and an Order of Restitution of $500.00 is a just and fair sentence pursuant to 18 USC §3553 (a) that is not greater than necessary to reflect the seriousness of the offense; to promote respect for the law and to provide just punishment for the offense; to afford adequate deterrence; to protect the public from further crimes of the defendant,” the attorney’s memorandum concludes.

To supplement this, the defense included a statement from the defendant herself, plus a movie review by Lloyd of “Schindler’s List” and a book review of “Just Mercy.”

“I’m Anna Lloyd, I’m 49 years old. I’m from a very small town in Southern Indiana, filled with hard working men and women. We are simple people who love our country,” Lloyd’s statement began before going into her upbringing, life as a grandparent, and being a “registered Democrat” who ended up supporting Donald Trump in 2016.

“Politically I’m a registered Democrat, that is how I was raised. Me saying I’m Republican sounds strange, not quite right. In the 2016 campaign season I found myself supporting Trump. My husband and I both found it hard to believe because we didn’t like him at all before. But he was standing up for what we believe in. We couldn’t argue with it. The Democrats started working against him. We felt that when they worked against him they worked against me, my family and my community,” Lloyd said. “When my friends and I decided to go to Washington D.C., our intent was to show support for the President. Show that a lot of American people support him. I knew I’d be no more than a body in the crowd, but 100,000 people like me shows support.”

Lloyd claimed that she entered the Capitol building on Jan. 6 to find a 74-year-old she and her group met that day.

“When a 74 year old woman, we met that day, went up [the steps], we followed to keep her safe. I made the decision to go up and I’m responsible for that. No one made me go, I wasn’t forced. When she entered the building, we went in to find her. Once again I could have chosen to stay outside,” Lloyd said, before condemning people for smoking cannabis inside the Capitol. “We were within 15 feet of the door when we found her in a corner. I took a minute to look around what could best be described as a wide hallway running along the exterior wall. I was disgusted by the disrespect people were showing to the Capitol Building by smoking pot in it.”

From here, Lloyd appears to engage in some revisionist history.

“I knew I was wrong for stepping even one foot into the building, that day, but I was still shocked when I was arrested,” she said. The FBI’s criminal complaint noted that Lloyd posted on Facebook after Jan. 6 and said it was the “most exciting day” of her entire life, suggesting that she was not ashamed and didn’t think she did anything worthy of being arrested.

This is underscored by the fact that Lloyd was arrested, in part, because she went directly to a law enforcement building three weeks later in an attempt to get a firearms permit. A sheriff’s office then reported Lloyd and her friend Dona Bissey to the FBI:

On or about January 22, 2021, ANNA MORGAN-LLOYD went to the Greene County Sheriff’s Office (“GCSD”) to obtain a firearms permit. While processing MORGAN-LLOYD’s application, a GCSD employee recognized MORGAN-LLOYD as a person that posted on Facebook about the January 6th events at the U.S. Capitol. GCSD reviewed MORGAN-LLOYD’s publicly available Facebook posts and found photos of MORGAN-LLOYD and DONA SUE BISSEY around and inside of the Capital at the time of these events. BISSEY was identified in these photos through a Facebook tag. GCSD referred MORGAN-LLOYD and BISSEY to the FBI.

Lloyd had posted that Jan. 6 was the “Best day ever” and that she and her friend were among the “first 50 people in” after storming the Capitol, but she still felt comfortable walking into a sheriff’s office.

In another post, Lloyd said she was glad she and Bissey (who was also charged) were in D.C. on Jan. 6 for the “experience and memory but most of all [so] we can spread the truth about what happened and open the eyes of some of our friends.” 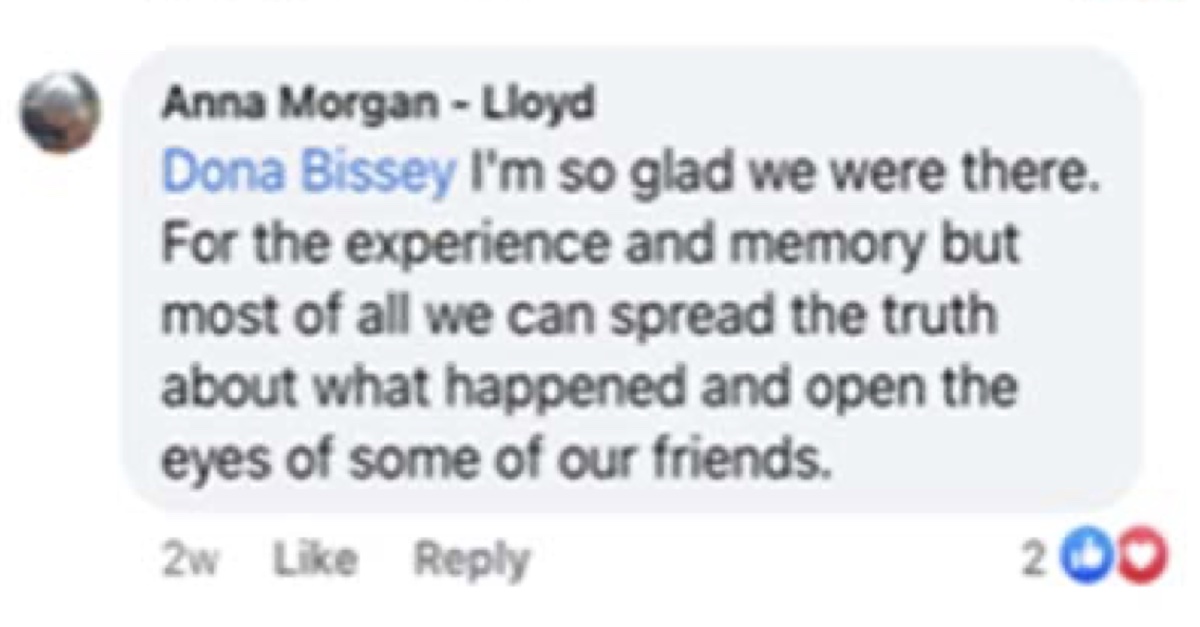 But now the tables have turned, and Lloyd claims she’s the one whose eyes are open to some truths.

My lawyer has given me names of books and movies to help me see what life is like for others in our country. I chose the movie whenever possible because it sinks in better. I’ve read the book, ‘Just Mercy,’ by Bryan Stevenson and ‘Bury my Heart at Wounded Knee,’ by Dee Brown. I have viewed movies including ‘Mudbound,’ ‘Schindler’s List,’ ‘Slavery by Another name,’ and ‘Burning Tulsa’ on the History Channel. I’ve learned that even though we live in a wonderful country things still need to improve. People of all colors should feel as safe as I do to walk down the street.

As an American I feel I’m very lucky to have been born in this country. As someone who is part Native American I feel my roots strongly. I would never want to live anywhere else. It’s not perfect but I believe it can and will get better for all people.

There are over 8,500 descendants of the Schindler Jews today.

This movie was very moving. Hard to watch and hard to not watch. It’s hard to believe there are people who say this never happened.

One of my Sons-in-Law is 1⁄2 German. His mother was born in Germany and has never became an American Citizen. My Son-In-Law doesn’t believe the Holocaust happened as it did. He says “Only” a million Jews died. One person being killed because of their faith is too many!

Some of Lloyd’s thoughts after reading “Just Mercy”

Just Mercy was written by Bryan Stevenson in 2014. In this book Mr. Stevenson tells about his time in the Southern States helping out African Americans on Death Row, condemned to die for crimes they didn’t commit. Some of the people he helped were guilty of a crime but grossly over charged for their crime, due to their skin color, financial status or their mental stability.

Mr. Stevenson attended Harvard Law School and took an internship in Georgia with the Southern Prisoners Defense Committee (SPDC). This was the first time Mr. Stevenson was faced with the inside of a prison.

This book covers the stories of dozens of people who Mr. Stevenson helped in his years following graduation from law school. He wasn’t always successful in helping the people but he did his best. This book concentrates on what happened to Walter McMillian. Walter McMillian was a hard working, law abiding black man, living in Monroeville Alabama. Walter only went to school until he was 8 or 9. At this time he became too valuable picking cotton to continue sending him to school.

When the cotton industry became less profitable Walter started his own pulp wood business. He didn’t get rich off his business but he was able to support his family and have a little left over. This would cause suspicion in the future because people would accuse him of selling drugs. Apparently people felt that was the only way a black man could have money. (My interpretation).

Reading this book makes me reconsider my view on the death penalty. It was far too easy for the people to convict a man of a crime that he could not have committed. How many more Walters are on death row. It would be better if a hundred men guilty of murder spend their natural life in prison than one innocent man die on death row.