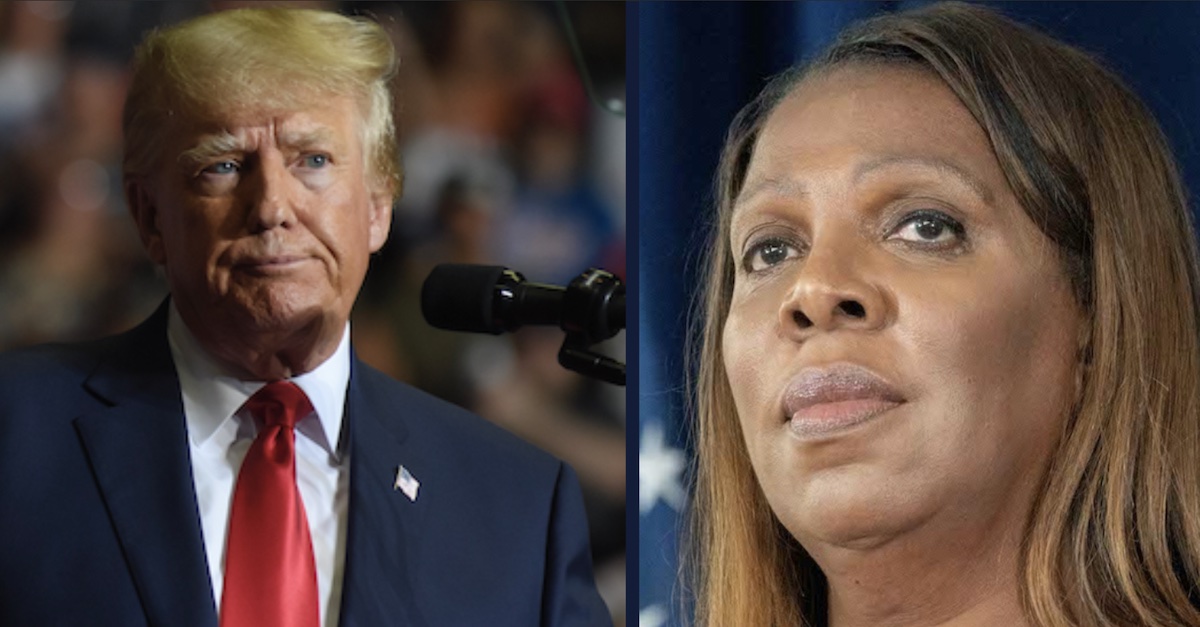 New York Attorney General Letitia James (D) filed her long-awaited lawsuit against former President Donald Trump on Wednesday, the culmination of nearly three years of investigating alleged tax fraud by him, his family and his companies.

The $250 million civil lawsuit, filed in New York state court, alleges “numerous acts of fraud and misrepresentation in the preparation of Mr. Trump’s annual statements of financial condition” from 2011 to 2021.

“Each Statement from 2011 to 2021 provides Mr. Trump’s personal net worth as of June 30 of the year it covers, was compiled by Trump Organization executives, and was issued as a compilation report by Mr. Trump’s accounting firm. Each Statement provides on its face that its preparation was the responsibility of Mr. Trump, or starting in 2016, the trustees of his revocable trust, Donald Trump, Jr. and Allen Weisselberg,” the lawsuit said. “Each Statement was personally certified as accurate by Mr. Trump, by one of his trustees, or in 2021 by Eric Trump, when submitting the Statement to financial institutions with the purpose and intent that the information contained in the Statement would be relied upon by those institutions.”

The attorney general said the lawsuit shows Trump inflated his net worth by billions and violated the law in doing so.

“The complaint demonstrates that Donald Trump falsely inflated his net worth by billions of dollars to unjustly enrich himself,” James said at a press conference on Wednesday. She said Trump was aided in these efforts by his children.

In a statement, AG James said that Donald Trump “stands out as among the most egregious examples of this misconduct,” namely “powerful, wealthy people in this country” operating “as if the rules do not apply to them. ”

“With the help of his children and senior executives at the Trump Organization, Donald Trump falsely inflated his net worth by billions of dollars to unjustly enrich himself and cheat the system. In fact, the very foundation of his purported net worth is rooted in incredible fraud and illegality,” James said. “Mr. Trump thought he could get away with the art of the steal, but today, that conduct ends. There are not two sets of laws for people in this country; we must hold former presidents to the same standards as everyday Americans. I will continue to ensure that no one is able to evade the law, because no one is above it.”

Earlier this month, The New York Times reported that the lawsuit against Trump and at least one of his children was imminent after the AG rejected a settlement offer by the former president’s attorney. The lawsuit takes the shape that the news report anticipated, with Trump as a defendant along with Eric Trump, Donald Trump Jr., and Ivanka Trump. Each have been deposed over the course or the AG’s investigation. Eric Trump invoked his Fifth Amendment right against self-incrimination in response to more than 500 questions. His father reportedly did the same 400 times.

The Times sources indicated that the attorney general’s office may try to curtail Trump’s real estate portfolio, and the complaint specifies what non-monetary relief regulators are seeking.

James asked a judge to permanently bar Trump, Trump Jr, Ivanka Trump, and Eric Trump from serving as an officer or director in any New York corporation.

The lawsuit also seeks to bar Trump and the Trump Organization from entering into New York State real estate acquisitions for “a period of five years.” 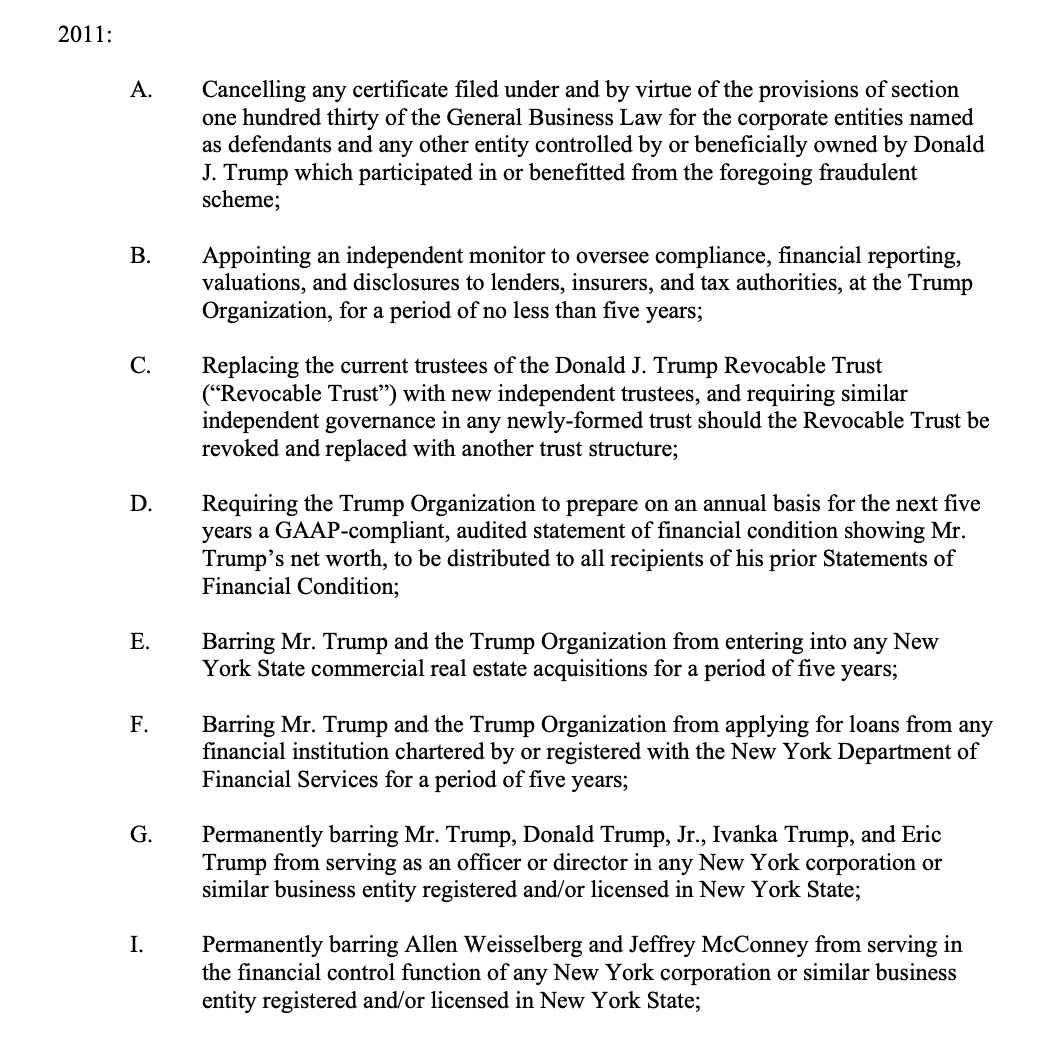 The lengthy complaint caps off an investigation that progressed steadily since early 2019, after Trump’s former attorney Michael Cohen told Congress that his former boss inflated or deflated assets to obtain tax benefits. That testimony sparked both civil and criminal investigations against Trump and the business empire, which allegedly unearthed striking irregularities: Trump inflated the size of his Trump Tower triplex by nearly three times, and the company valued rent stabilized units 66 times higher than an outside appraiser did, according to the attorney general.

Weisselberg was named as a defendant in James’ civil lawsuit. The attorney general also seeks to permanently bar Weisselberg from acting in a “financial control function” in New York.

“White collar financial crime is not a victimless crime,” James said, noting her office referred its findings to the U.S. Attorney’s Office for the Southern District of New York.

Saying “no one is above the law,” even former presidents, James dubbed Trump’s alleged actions as the “Art of the Steal.”

DA Bragg, for his part, said in a statement that his office’s “criminal investigation concerning former President Donald J. Trump, the Trump Organization, and its leadership is active and ongoing.”

Donald Trump Jr. responded to the lawsuit by calling it a “bullshit Dem witch-hunt.” Eric Trump echoed that.

Both of them shared a 2018 video of James during campaign season saying “oh, we’re gonna definitely sue [Trump], we’re gonna be a real pain in the ass. He’s going to know my name personally.”

Trump lawyer Alina Habba said in a statement to Law&Crime that James’ lawsuit is “neither focused on the facts nor the law – rather, it is solely focused on advancing the Attorney General’s political agenda.”

“It is abundantly clear that the Attorney General’s Office has exceeded its statutory authority by prying into transactions where absolutely no wrongdoing has taken place,” Habba said. “We are confident that our judicial system will not stand for this unchecked abuse of authority, and we look forward to defending our client against each and every one of the Attorney General’s meritless claims.”