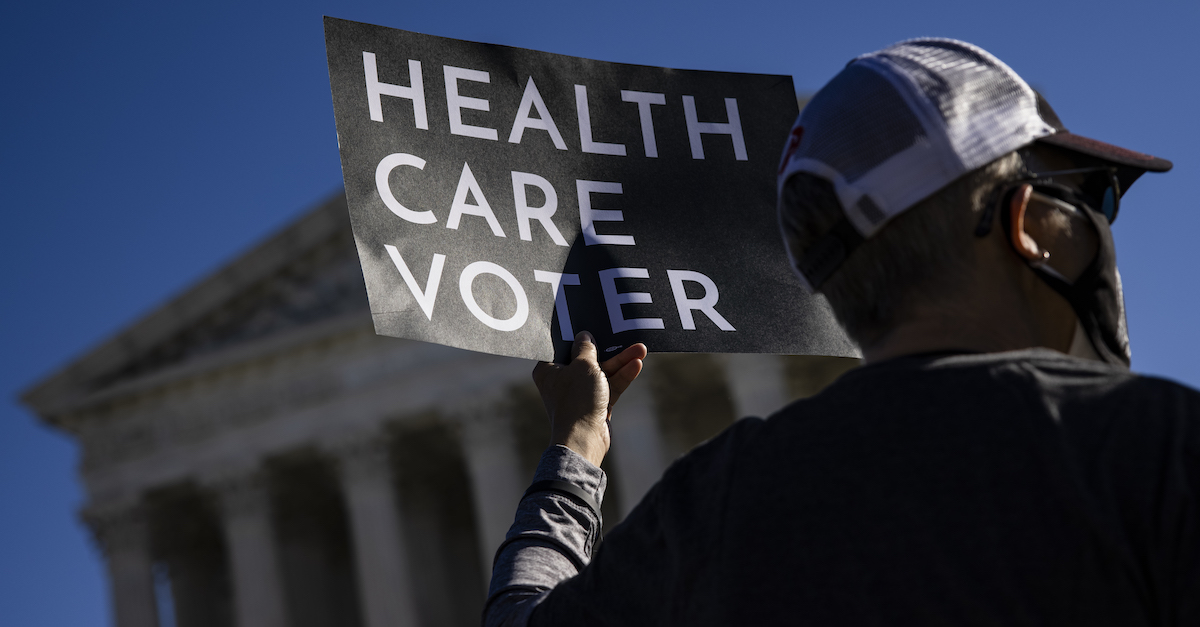 The Supreme Court heard oral arguments in California v. Texas on Tuesday, the long-awaited case about the future of the Affordable Care Act (ACA).

While the case before the Court technically does ask whether the ACA (also known as Obamacare) is constitutional, another question looms that is likely more important in a practical sense. That issue is whether the individual mandate portion of the ACA is “severable” from the rest of the statute.

There has already been significant litigation about the constitutionality of the “individual mandate” contained in the ACA. In response, Congress made a 2017 amendment to the ACA in which it excised the “tax” (aka penalty) for failing to abide by the requirement to have individual health insurance.

The Department of Justice now argues that the “entire ACA must fall” just as the individual mandate did. That question–whether the offending portion of the statute can be cut out but the remainder of the statute preserved–was the primary focus of oral arguments on Tuesday.

Generally, courts favor severability. The assumption, of course, is that Congress would want to keep some of its law, as opposed to none at all. In the context of the ACA, that logic is pretty compelling. Congress’s 2017 amendment shows that Congress itself chose to change the individual mandate while leaving the rest of the ACA intact.

The proceedings Tuesday addressed several separate issues: the legality of the mandate itself, the right of the plaintiffs to even bring the litigation, and the fate of the remainder of the ACA if the mandate is thrown out. Here are some of the noteworthy moments.

1. Right out of the gate, Justice Clarence Thomas started asking whether the individual mandate was like a mask mandate.

“In today’s terms, I assume that in most places there is no penalty for wearing a face mask, or a mask during COVID,” Justice Clarence Thomas said to California Solicitor General Michael Mongan.

“What if someone violates that command–let’s say in similar terms to the mandate here–but no penalty, would they have standing to challenge the mandate to wear a mask?” he continued to ask.

What matters, explained Mongan, is whether there is “a threat or possibility of enforcement.” Because Congress lacks any real power of enforcement, Mongan argued, Texas lacks standing to challenge that mandate.

This exchange, discussed at greater length here, centered the arguments not on severability, but on standing. As we’ve seen many times in the past, the Supreme Court may wish to duck out of deciding the case on the basis that plaintiffs (here, individual states) lack the proper legal standing to bring the litigation in the first place.

Justice Brett Kavanaugh asked, “Suppose Congress passed a law that made everyone living in a house fly an American flag. Why isn’t that enough to give you standing, knowing that some people are going to do that – buy and then fly a flag simply because Congress requires that?”

Kavanaugh’s question was in many ways the other side of Clarence Thomas’s coin. Both invite hypotheses as to Americans’ willingness to follow laws when there is no penalty for disobedience. Essentially, this is the legal version of the tree-falling-in-the-woods question; if there is no price to pay for violating a law, does that law even burden you?

Mongan was skeptical that people would act solely because an impotent law told them to do so.

“I think it is unlikely,” he answered, “that individuals who wouldn’t already take advantage of the very generous Medicaid programs would do it solely because of an unenforceable command.”

3. Everyone was working inside the minds of members of Congress.

Donald Verrilli, the attorney for the U.S. House of Representatives and former Obama administration solicitor general, argued that Congress could not possibly have preferred that the entire ACA be struck down simply because the individual mandate was “zeroed out.” Congress’s choice to change the penalty to zero as oppose to repealing the section of the statute altogether, was an informed one, argued Verrilli–and it shows that Congress wouldn’t have wanted the entire ACA to “come crashing down.”

Justice Stephen Breyer asked—or at least tried to ask—how it is possible that attitudes about the individual mandate have changed so dramatically over time.

“We heard that the mandate was absolutely crucial,” Breyer began, “because unless people buy insurance under this mandate, the other provisions such as not having to worry about preexisting conditions…”

Unfortunately, though, Breyer was cut off and Chief Justice John Roberts stepped in and turned the floor over to Justice Samuel Alito. Alito then raised the question of congressional intent. Members of Congress might have disagreed on the matter of whether the individual mandate should be severable, pointed out Alito. Shortly thereafter, Breyer was given another opportunity to speak, but he declined to do so, allowing Justice Sonia Sotomayor to take over.

Kavanaugh said, “I tend to agree” that the individual mandate (as amended to contain no penalty) can be severed from the rest of the law. Given that the ACA’s fate may well be determined on just this issue, those were four words that resonated loudly on Tuesday.

Roberts also commented that Texas’s theory of severability “doesn’t look like any other severability clause anywhere else in the U.S. code to me”—signaling that he isn’t likely to vote to strike down the entire ACA.

7. Justice Breyer introduced the world to the words “hortatory” and “precatory.”

By way of comparison to the individual mandate lacking a penalty, Breyer raised some questions about other statutes that similarly provide direction without consequences for failure to comply. Breyer asked about statutes that say things like: “buy war bonds,” “plant a tree,” or “Beautiful Cities Day: Clean up the yard!”

“I can recall dozens of statutes where Congress says something where normally we would say it’s precatory,” the justice said to Texas Solicitor General Kyle Hawkins. “Are all those statutes suddenly open to challenge? Are none of them? If so you lose. If it’s in between, which are and which aren’t?” challenged Breyer.

A very animated Breyer presses Hawkins on his theory that a command to do something, without a penalty, is unconstitutional. Under that theory, Breyer says, all sorts of “hortatory” statements from Congress (such as laws that encourage people to “plant a tree”) would be invalid.

For the record, “hortatory” and “precatory” are often used interchangeably to refer to language (in statutes and otherwise) that encourage, but do not demand, certain actions.

8. Justice Breyer’s patience ran all the way out.

Breyer, taking pains to differentiate his view from that of Kavanaugh, seemed exasperated with U.S. Solicitor General Jeffrey Wall (who was arguing against the ACA). Repeatedly, Breyer asked Wall whether he or someone from his office has read through the entire U.S. Code and found it clean of any precatory language that uses the word “shall.” In other words, Breyer was pressing Wall on the consistency of his argument that lack of penalty dooms the statute.

Breyer even went so far as to ask Wall, “Have you ever said to someone in your family ‘you shall do it’–and it’s an entreaty and supplication rather than threatening a punishment?”

Wall wouldn’t play along, though. “No, Justice Breyer,” he answered, “in my family when I tell my kids that they shall do things, that is a command backed by a penalty.”

“Well, that is a much more organized family than mine,” Breyer ended.

Certainly, all eyes are on the Court’s newest justice, the President Donald Trump-appointed Justice Amy Coney Barrett. During the proceedings, though, Barrett  focused her inquiries on the underlying constitutionality of the individual mandate, the parties’ standing, and congressional intent.