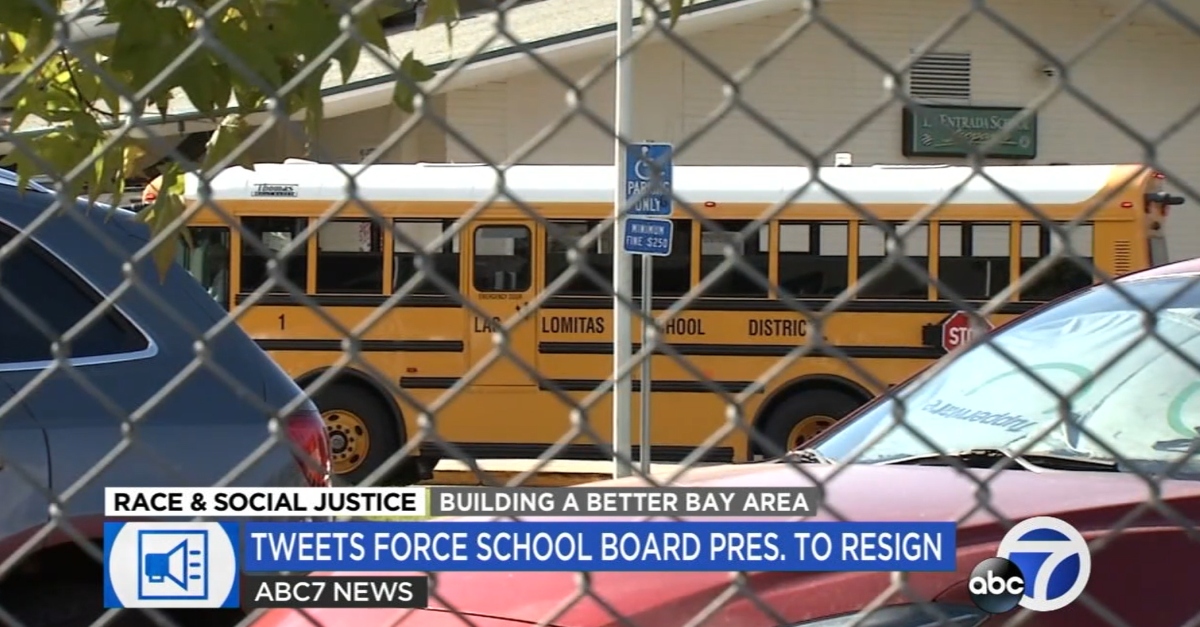 A school board president in Menlo Park, California is out of a job, but not for something he did. His wife wrote some racist, vulgar posts about Vice President-elect Kamala Harris (D-Calif.).

“All she needs to be qualified is a black pussy!” Mehridith Venverloh wrote from a now-deleted Twitter account. “No brain needed!!”

"I almost vomited…I was just shaking and I was so angry." Parents are furious over the 'racist' tweets made by the wife of former Las Lomitas school board president Jon Venverloh, targeting Vice President-elect Kamala Harris.​ https://t.co/EgpYDhjSxE pic.twitter.com/mN2omzOG63

Screenshots of other posts show her writing:

Another tweet–in which she wrote “#MAGA2020”–indicated she was a supporter of President Donald Trump.

Venverloh is white. Harris is the daughter of a Black, Jamaican man, and an Indian mother.

The posts caught quite a bit of local attention because Venverloh’s husband is Jon Venverloh, president of the Las Lomitas school board.

“Let me be clear: I did not make the remarks that have so upset the community,” he said in a statement announcing his resignation, according to KGO. “I was not present when they were made. I have never encouraged such thinking or opinions, and I don’t agree with them in any way whatsoever. They do not represent who I am nor who my family is in any way.”

“On the contrary, I have been an active champion of diversity and inclusion and we have funded significant projects to benefit the underserved,” he added. “As School Board president I called for a review of our curriculum to ensure it addresses topics of racial understanding and respect, and I always apply a strong equity lens to all our policy decisions.”

Mehridith Venverloh admitted writing the posts “in a moment of disappointment” and she issued an apology, but she attributed the tweets to her weaning off of medication.

“Some of you know I suffer from a debilitating neurological disease, and as a result I take various medications,” she wrote. “Over the past several days I have been weaning off of my meds to prepare for a hospitalization that is scheduled to start tomorrow. I believe that the change in my medication reduced my judgment between right and wrong when I made the posts. There is no excuse for what I wrote, but I ask for your understanding that my state of mind was far from normal last night.”