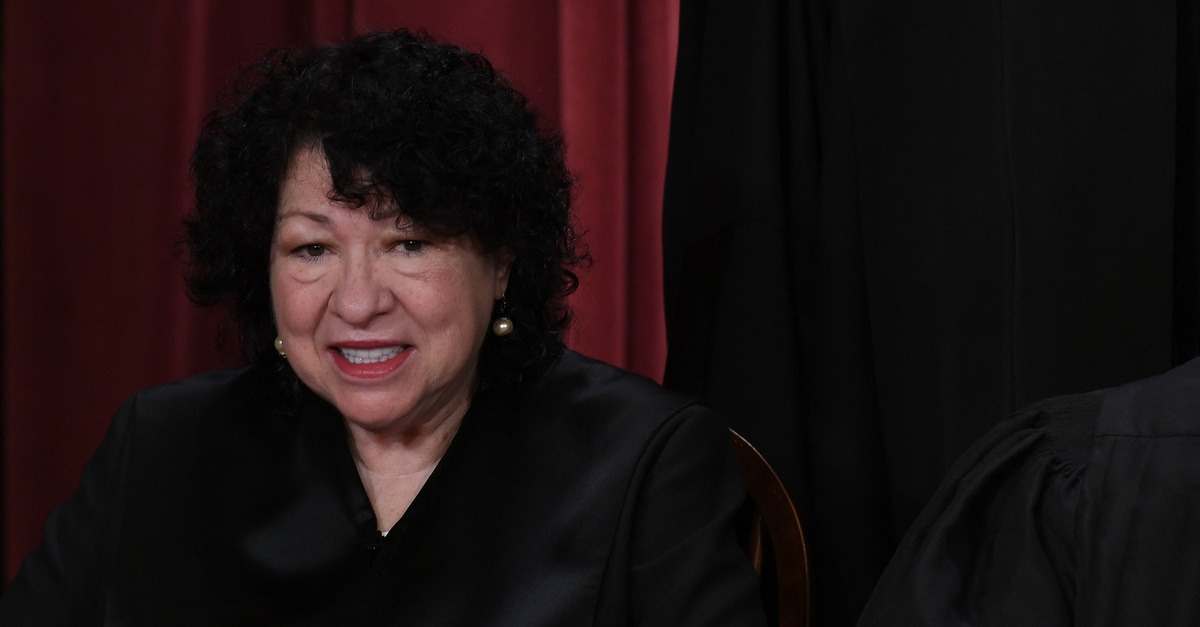 Supreme Court Justice Sonia Sotomayor dissented from an order denying certiorari on Tuesday in a death penalty case where Black defendant was convicted and sentenced by an all-white jury that included three people who gave racist answers on juror forms.

Specifically, the three jurors in question said they were opposed to interracial marriage and interracial couples having children.

As it turns out, those questions directly applied to the facts of the case in the state’s effort to execute Andre Thomas, a Black man from the Texoma region who brutally killed his estranged white wife, their interracial child, and her child from another relationship in 2004.

The dissent recounts the violence:

The facts of Thomas’ offense were gruesome: Thomas attempted to remove the victims’ hearts because he believed that would “set them free from evil.” Thomas also stabbed himself during the course of his offense; later that day, he turned himself in and confessed. While Thomas was incarcerated awaiting trial, he removed one of his own eyeballs; years later, he removed the other one. Thomas pleaded not guilty by reason of insanity, and while the State agreed that Thomas was psychotic at the time of his offense, it prevailed in arguing that “his psychosis was voluntarily induced just before the killings through ingestion of . . . cough medicine.”

Thomas was found guilty and sentenced to death. He subsequently appealed through the state and federal systems, arguing two theories based on the presence of the three jurors:  (1) that his trial was marred by ineffective assistance of counsel who allowed the jurors through without even trying to strike them; and (2) that his constitutional right to an impartial jury had been violated because of those three jurors.

One of those jurors marked a box saying he was “vigorously” opposed to people of “different racial backgrounds marrying and/or having children” and that he was “not afraid to say so.”  In an additional space on the form, he wrote: “I don’t believe God intended for this.” When pressed on his views, the juror said: “I think it’s wrong to have those relationships,” but he added that he would not let his views on race influence his ability to judge or deliberate in a murder trial. In the end, Thomas’s defense attorney didn’t move to strike the juror.

The second juror in question said she opposed interracial marriage and procreation but aimed to keep her opinions to herself, explaining: “I think it is harmful for the children involved because they do not have a specific race to belong to.” The third juror in question wrote that interracial marriage “[s]hould not [b]e” and added: “I think we should stay with our Blood Line.” Neither of those two additional jurors were subject to any additional questioning about their answers on race. The defense then allowed both through without an attempted strike or otherwise.

The dissenting opinion says those jurors should not have been seated — and that the Texas Court of Criminal Appeals clearly erred when they adopted a lower state court’s order in the case finding no issue with the jury composition or the attorneys’ performance.

By failing to challenge, or even question, jurors who were hostile to interracial marriage in a capital case involving that explosive topic, Thomas’ counsel performed well below an objective standard of reasonableness. This deficient performance prejudiced Thomas by depriving him of a fair trial. The state court’s contrary decision was an unreasonable application of clearly established Supreme Court law.

A good deal of the dissent’s discussion deals with what it views as the shabby lawyering that allowed the jurors to serve on Thomas’s jury.

“This is a capital case involving interracial violence where three seated jurors and an alternate expressed prejudicial views,” Sotomayor writes. “Had defense counsel requested individual voir dire of the three prospective jurors, it would have been reversible error for the trial judge to deny that request. Counsel’s failure to do so was constitutionally ineffective.”

Accepting general affirmations from a juror about their lack of racial bias after such a juror “admit[s] prejudice” is not in line with various Supreme Court precedents cited, the dissent, joined by Justices Elena Kagan and Ketanji Brown Jackson, notes.

The dissent also criticizes Thomas’s trial lawyers for initially supporting his ineffective assistance of counsel claim in affidavits explaining away their failure to sufficiently question the jurors as “not intentional” and part of a “nightmare” process – before later siding with the state by filing two self-serving affidavits saying the decisions not to interrogate those jurors were actually strategic in nature.

“Moreover, while trial counsel has wide latitude to make strategic decisions during voir dire, there was no excuse in this case for their failure to ask the three other jurors questions similar to those that counsel asked,” Sotomayor goes on. “Trial counsel initially admitted as much, swearing in affidavits that counsel’s failure to probe the jurors’ views ‘was not intentional’ before subsequently attesting that counsel ‘questioned [the jurors who expressed opposition to interracial marriage] to the extent necessary.’ Trial counsel’s unusual, subsequently filed affidavits on behalf of the State are contradicted by the record.”

Interracial marriage is a constitutional right guaranteed by Loving v. Virginia (1967).  In that case, a lower court’s opinion contained logic that roughly tracked the views of the three jurors in question in this case.  The U.S. Supreme Court held that such beliefs did not comport with either the Equal Protection Clause or the Due Process Clause of the Constitution.