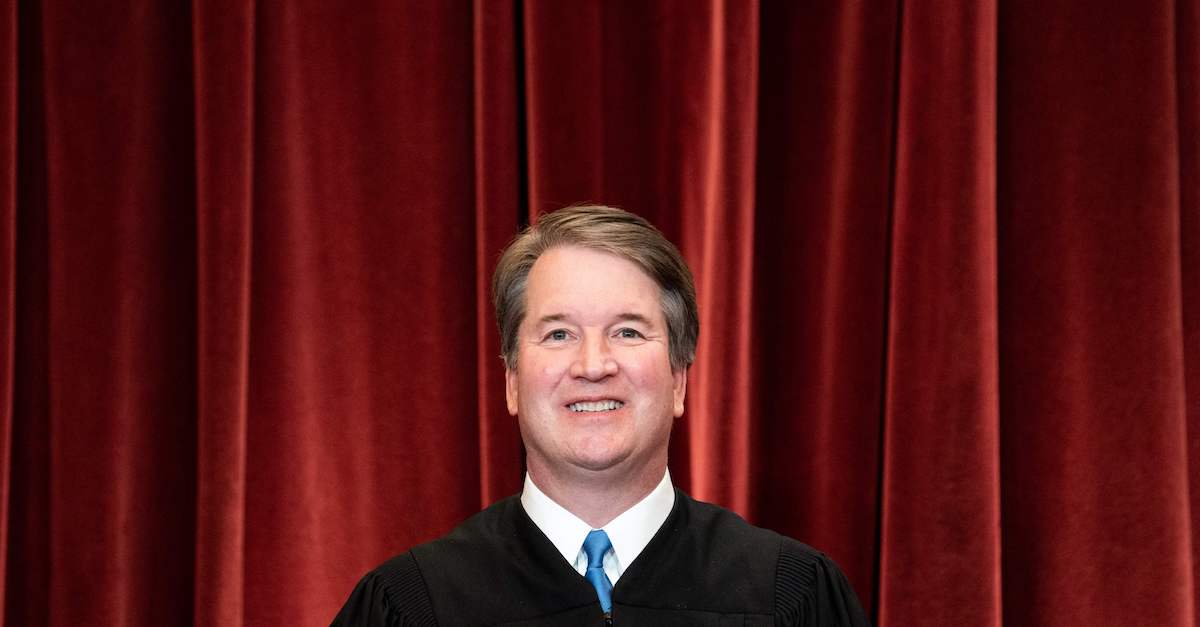 Associate Justice Brett Kavanaugh stands during a group photo of the Justices at the Supreme Court in Washington, DC on April 23, 2021.

The U.S. Supreme Court on Wednesday unanimously ruled in favor of hospitals in a dispute over Trump-era Medicare drug reimbursement rate cuts that were being defended by the Biden administration.

In the case stylized as American Hospital Assn. v. Becerra, the high court ruled in an opinion authored by Justice Brett Kavanaugh that the Department of Health and Human Services unlawfully lowered payments to hospitals and health clinics that serve rural and low-income communities in both 2018 and 2019.

Under the federal Medicare statute, the government has only two options for how they set annual reimbursement rates.

Notably, varying rates is only allowed if the government uses the first option. And, as the majority explains, the first option requires the user of particular survey data that is also strictly governed by statute.

Kavanaugh notes the rub: “For more than a decade after those provisions took effect in 2006, HHS did not conduct a survey of hospitals’ acquisition costs. Indeed, HHS has only once attempted to conduct such a survey—in 2020, after this litigation commenced.”

Still, lacking any survey data whatsoever, and in the absence of any attempt to ever gather such data, the Trump administration slashed reimbursement rates for so-called 340B hospitals that offered patients drugs to deal with, the opinion notes, “cancer, mental health issues, opioid addiction, and diabetes,” to the tune of $1.6 billion.

The government claimed they were simply trying to recoup past overpayments and accused the hospitals in question of generating “significant profits” by giving Medicare patients prescription drugs.

The hospital group raised the fraught legal issues before the new rates took effect but HHS went forward with the plan.

Litigation eventually ensued. The district court ruled for the hospitals, finding that HHS acted beyond their authority outlined in the Medicare statute. The U.S. Court of Appeals for the District of Columbia Circuit reversed and a divided panel upheld the rate adjustments.

“The question is whether the statute affords HHS discretion to vary the reimbursement rates for that one group of hospitals when, as here, HHS has not conducted the required survey of hospitals’ acquisition costs,” Kavanaugh writes, summing up the court’s work here. “The answer is no.”

The opinion is self-avowedly limited, taking an agnostic stance on how much latitude the government has to cut reimbursement rates when they actually do conduct the required rate-adjustment survey.

The issue here, rather, is much more basic.

During oral argument, the Biden administration complained that it is “very burdensome” to conduct such surveys and that Congress surely never meant for HHS to “overpay” 340B hospitals.

The opinion elides the hard work argument and disposes of the overpayment allegation by reference to legislative history:

[W]hen enacting this statute in 2003, Congress was well aware that 340B hospitals paid less for covered prescription drugs. After all, that had been the law for the duration of the 340B program, which began in 1992. In 2003, Congress nonetheless did not see fit to differentiate 340B hospitals from other hospitals when requiring that the reimbursement rates be uniform under option 2.

Ultimately, the court held, those professed cost concerns have nothing to do with the statute as written and are belied by how the statute actually came into being in the first place nearly two decades ago.

“In short, the statute allows HHS to set reimbursement rates based on average price and affords the agency discretion to ‘adjust’ the price up or down,” the opinion goes on. “But unless HHS conducts a survey of hospitals’ acquisition costs, HHS may not vary the reimbursement rates by hospital group.”

The opinion was Kavanaugh’s first since a California man who said he needed “psychiatric help” allegedly threatened to murder the justice. Just under a week after the incident, the House passed a bill to increase security for justices and their family.