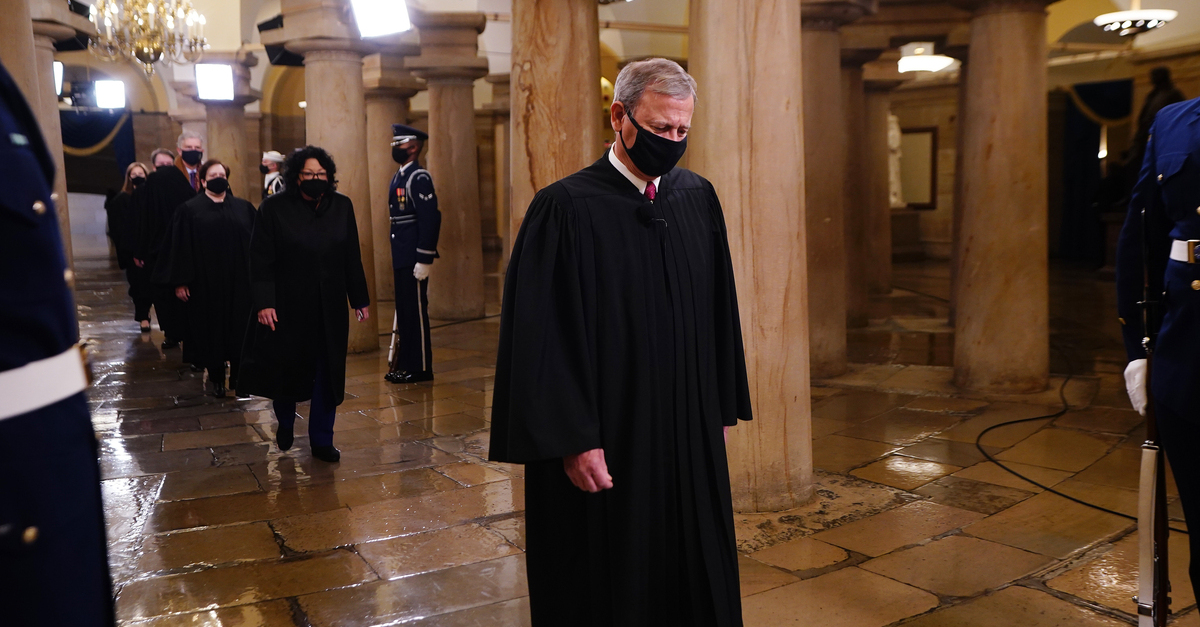 The Supreme Court on Monday sided with a woman who filed an excessive force and unreasonable seizure lawsuit after being shot by police. The high court ruled that even though the woman successfully fled, the fact that she was shot constituted a “seizure” under the Fourth Amendment.

The case stemmed from a 2014 incident involving Roxanne Torres and two New Mexico State Police officers tasked with executing an arrest warrant on another woman at an apartment complex. The officers attempted to speak to Torres and a third (unrelated) woman during the process of serving the warrant. Torres had just gotten into her car in the complex parking lot. When officers tried to open her door, she assumed the officers were carjackers, so she fled. Officers fired a total of 13 shots to stymie her escape — hitting her twice — but Torres still managed to drive 75 miles to a hospital.

“Under our cases, an officer seizes a person when he uses force to apprehend her,” Chief Justice John Roberts wrote for the court’s 5-3 majority. “The question in this case is whether a seizure occurs when an officer shoots someone who temporarily eludes capture after the shooting. The answer is yes: The application of physical force to the body of a person with intent to restrain is a seizure, even if the force does not succeed in subduing the person.”

Torres sued the State Police and the officers in federal court for violating her Fourth Amendment right against unreasonable seizure. Both the district court and the Tenth Circuit Court of Appeals granted summary judgment in favor of the officers, with the latter affirming that “no seizure can occur unless there is physical touch or a show of authority,” and that “such physical touch (or force) must terminate the suspect’s movement” and result in physical control over the person.

In overturning the lower courts’ decisions, Roberts grounded his opinion in an updated version of the “laying hands” doctrine, which defines an arrest to include “touching or putting hands upon [the arrestee] in the execution of process” — provided the officer’s intent to arrest is clear.

In his analysis, Roberts conceded that the case did not involve any physical contact, but said that neither party suggested “that the officers’ use of bullets to restrain Torres alters the analysis in any way.”

Roberts said there was “no common law authority” addressing the use of force from a distance, but found the most analogous case to be one dating back more than 400 years to medieval England. The case involves a “mace” — a heavy staff or club used to break armor or otherwise beat an individual into submission.

“The closest decision seems to be Countess of Rutland’s Case,” the chief justice wrote.

There isn’t really a case in medieval English law about shooting a fleeing suspect, SCOTUS says, so this was the closest analogue they found. pic.twitter.com/kLtZgRNKt8

“In that case, serjeants-at-mace tracked down Isabel Holcroft, Countess of Rutland, to execute a writ for a judgment of debt. They ‘shewed her their mace, and touching her body with it, said to her, we arrest you, madam.’ We think the case is best understood as an example of an arrest made by touching with an object, for the serjeants-at-mace announced the arrest at the time they touched the countess with the mace.”

The ruling means Torres will have another opportunity to make her case in the lower courts where she is still required to show that the officers use of force was unreasonable.

It is settled law that officers cannot shoot and kill suspects to stop them from fleeing unless the officer or others in the community face “a significant threat of death or serious physical injury.”

Roberts was joined in the majority by Justices Stephen Breyer, Sonia Sotomayor, and Elena Kagan, as well as Donald Trump-appointed Justice Brett Kavanaugh. Justice Neil Gorsuch penned a dissent that was joined by Justices Clarence Thomas and Samuel Alito. Justice Amy Coney Barrett did not vote because arguments in the case occurred before she was seated on the high court.