Clarence Thomas Blames Judges for Politicization of the Courts

Justice Clarence Thomas Blames Judges for Politicization of the Courts, Slams the ‘Craziness’ of His Confirmation Hearings, and Jokes That He Definitely ‘Didn’t Go Watch Hamilton‘ 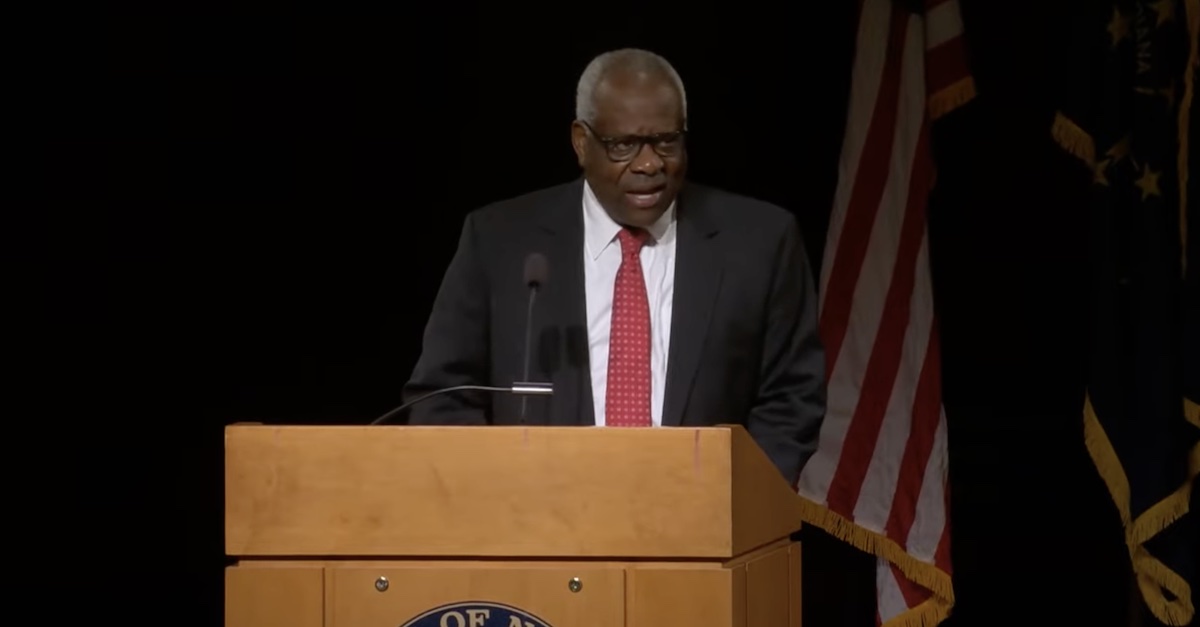 Over the last few days, three Supreme Court justices have spoken publicly: Justice Stephen Breyer on Fox News, Justice Amy Coney Barrett while flanked by Sen. Mitch McConnell in building named after the top Senate Republican, and now Justice Clarence Thomas at the University of Notre Dame. Each of the justices expressed general agreement with the idea that the high court is threatened by those who view decisions through a political and results-oriented lens, but Thomas assigned blame to judges for that.

Justice Thomas’ lecture at the DeBartolo Performing Arts Center focused on subjects of equality, race, faith, universal truth, the media and academics, national unity and spirit, and the American founding with its English roots. The lecture began with a reference to late Justice Antonin Scalia. The two justices, Thomas said, independently arrived at the same decisions, “yet, he was from an educated family in the urban northeast, while I was from uneducated family from the Deep South.”

“Of course, the condescending media elites accused me of being his flunky, which bothered him much more than it bothered me,” Thomas said.

“Neither slavery nor Jim Crow defeated us. We recognize that Dr. Martin Luther King Jr. declared decades ago that the magnificent words of the Constitution and the Declaration of Independence were a promissory note to which every American was to fall heir,” the justice added. “The history of our nation is our shared struggle to live up to that promise. It is a slow arduous battle, but we have yet to fail.”

Thomas then railed against those who would “cancel” the Founding Fathers.

“Today, there is a notable pessimism about the state of our country and cynicism about our founding. There are some who would even cancel our founders,” he said. “There are many more of us, I think, who feel that America is not so broken as it is adrift at sea.”

The conservative justice, needling “clever academics,” said that the Declaration of Independence endures to this day simply because it is true.

“Ultimately, the Declaration endures because it articulates truth. It was not a grand philosophy contrived by clever academics. It came from antecedent shared values unlike so many of the theories of more recent vintage,” he said.

After Thomas stopped speaking (around the 56:00-mark of the video above), a woman could be heard saying repeatedly: “I still believe Anita Hill.” The Notre Dame audience booed her and then clapped (seemingly after she was removed from the room).

The first and main audience question Thomas answered was about what threats he sees to the autonomy of the judicial system.

“Judges going beyond what Article III requires and staying within the limitations on judges,” he said. “There’s always a temptation to go beyond,” pointing to substantive due process as an example.

Thomas said that when the courts veer into the executive and legislative branch “lanes” in “resolving things” that are “better left to those branches, where people actually have some input and some opportunity to participate,” federal judges with lifetime appointments are “asking for trouble.”

“I think the court was thought to be the least dangerous branch and we have become the most dangerous,” Thomas said. “And I think that’s problematic.”

“Hence, the craziness during my confirmation was one of the results of that. It was absolutely about abortion, a matter I had not thought deeply about at the time,” he added, just minutes after the “I still believe Anita Hill” chants.

“But I think a lot of it’s our own doing and I think the threats are we have lost the capacity even, I think, as leaders to not allow others to manipulate our institutions when we don’t get the outcomes that we like,” Thomas said. “When, for example, President Roosevelt threatened to pack the court, there was enough sense of what the court meant and what separation of powers meant to criticize him.”

“Today you see almost no criticism, or very little, when you have those kinds of conversations,” he said. “So I think part of its our — the judges’ — own doing by venturing into areas we should not have ventured into.”

But despite this and other criticisms of the status quo, Thomas quipped that he still has hope for the future while answering an audience question about whether he would have sided with the Federalists or anti-Federalists.

“I’ve been on the court for 30 years. It’s flawed, but, you know, I will defend it because, knowing all the disagreements, it works. [The system] may work sort of like a car with three wheels but it still works,” he said, to laughter. “I think we should be careful about destroying our institutions because they don’t give us what we want when we want it. I think we should be really careful.”

“I can’t be too forceful of my criticism of the Federalists,” Thomas said. “But I do tend toward — I didn’t go watch Hamilton, I can tell you that.”

The justice was next asked: How often do oral arguments change your mind?

“You know, it’s sort of like when I used to watch basketball a lot, they’d talk about the big man in the paint. You do your work early and you get low and it’s over,” Thomas explained. “You can try to block Shaquille O’Neal three feet from the basket, well good luck with that. He did his work early and he got low and he received the pass.”

“The real work is in the briefs,” he said.