After Being Introduced by Mitch McConnell at an Event, Justice Barrett Worries People See SCOTUS as Political Institution 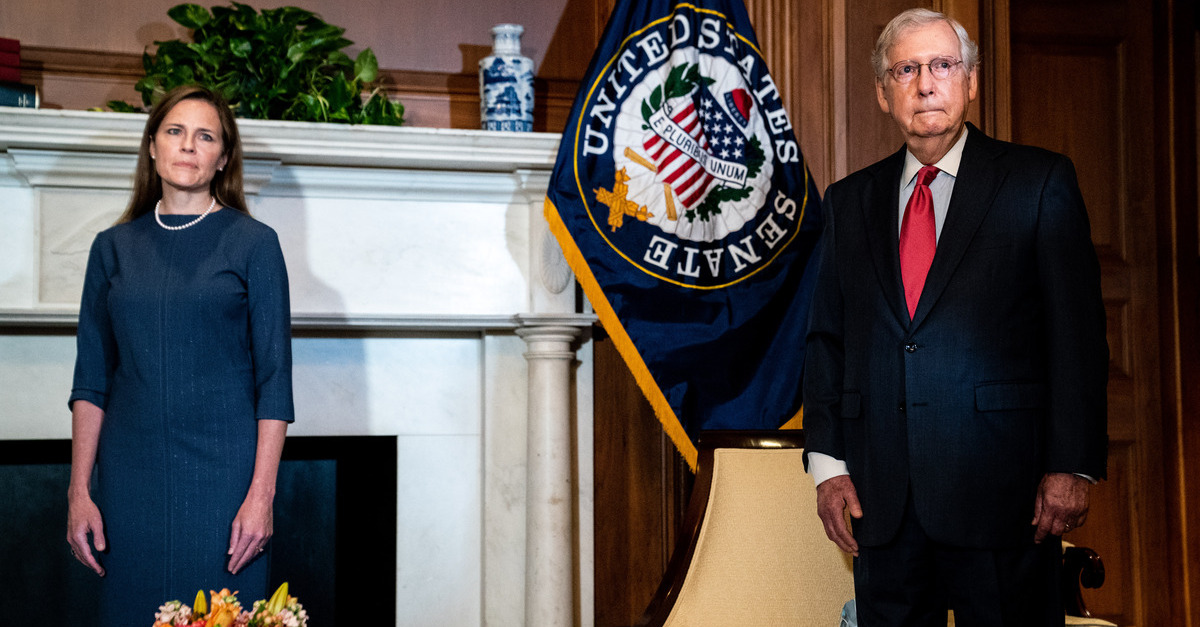 Supreme Court Justice Amy Coney Barrett delivered a speech Sunday to guests at a 30th anniversary celebration for the McConnell Center at the University of Louisville, named for top Senate Republican Mitch McConnell. Barrett used her remarks to argue that the Supreme Court is a non-partisan institution and that the justices should not be viewed as political operatives, echoing remarks Justice Stephen Breyer made in a Sunday interview.

“My goal today is to convince you that this court is not comprised of a bunch of partisan hacks,” Justice Barrett said after being introduced by Senator McConnell. Barrett continued, warning that members of the Court must be “hyper vigilant to make sure they’re not letting personal biases creep into their decisions, since judges are people, too.”

In the face of calls for his retirement, Justice Breyer has also warned recently against the dangers of considering Supreme Court justices as “primarily political officials or ‘junior league’ politicians themselves rather than jurists.”

Barrett called out the media for covering Supreme Court decisions in a manner that creates the perception that those decisions fall in line with political ideologies, rather than judicial philosophies.

“The media, along with hot takes on Twitter,” said Barrett, “report the results and decisions. … That makes the decision seem results-oriented.”

“It leaves the reader to judge whether the court was right or wrong,” she continued, “based on whether she liked the results of the decision.”

Students in attendance submitted questions in advance to Justice Barrett, including some about the Court’s controversial “shadow docket,” and the Court’s recent decisions on Texas’ restrictive abortion law and the Trump-era “Remain in Mexico” policy. Barrett said it would be “inappropriate” to comment on those matters specifically, as they may continue to be before the high court.

Legal Twitter was quick to point out the tension between Barrett’s declarations of the court’s apolitical nature and the extreme partisanship of her confirmation. Slate‘s Mark Joseph Stern called Barrett’s speech a “victory lap” for the justice and the senator who championed her appointment.

Elie Mystal of The Nation also pointed out that the optics of the event seemed to contradict Barrett’s words, tweeting, “She’s the freaking hot dog car meme now.”

She said this while STANDING NEXT TO MITCH MCCONNELL.

Lawyer and author Kenneth Jost put people on “irony watch,” tweeting that Barrett’s speech “bemoans public perception of justices’ partisanship while speaking as guest of GOP leader who got her rush-confirmed in Trump’s final months in office [Not the Onion].”

#SCOTUS .. irony watch .. Justice Barrett bemoans public perception of justices’ partisanship while speaking as guest of GOP leader who got her rush-confirmed in Trump’s final months in office [Not the Onion] https://t.co/nfYdyII00D