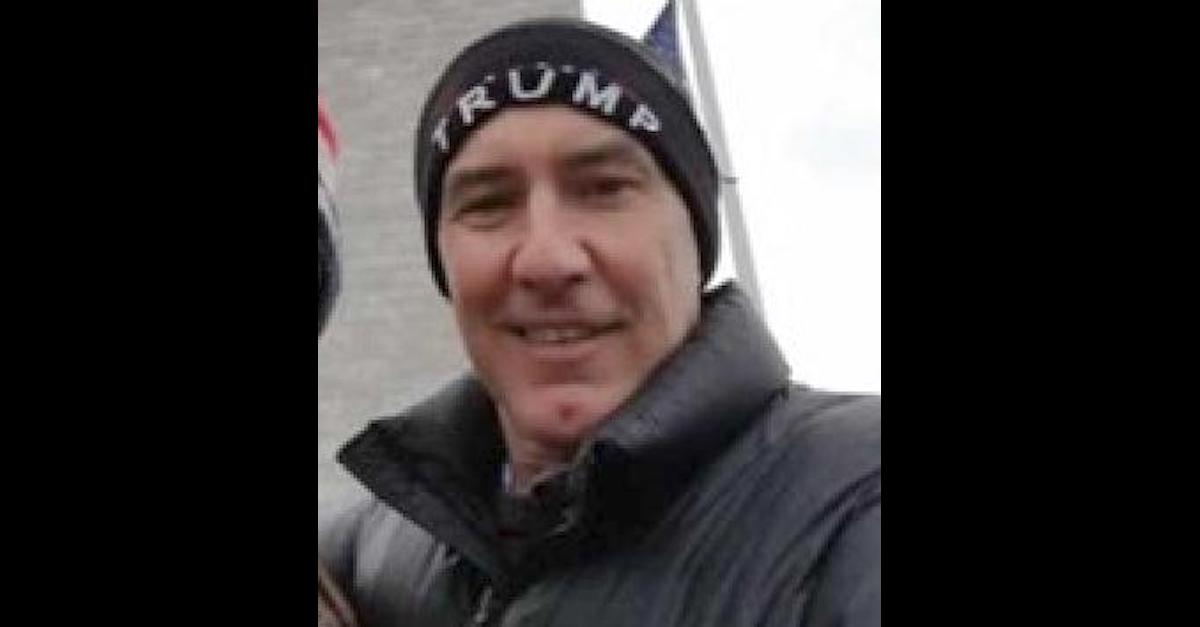 Kenneth Kelly appears in an image embedded within a federal court document.

A defendant who faced four charges in connection with the Jan. 6th breach at the U.S. Capitol Complex pleaded guilty on Friday to one of the four counts he faced.

Dr. Kenneth Kelly, 58, of Ocala, Fla., was accused of (1) knowingly entering or remaining in any restricted building or grounds without lawful authority, (2) disorderly and disruptive conduct in a restricted building or grounds, (3) disorderly conduct on Capitol grounds, and (4) parading, demonstrating, or picketing in a Capitol building. Kelly told U.S. District Court Judge Colleen Kollar–Kotelly that he was agreeing to plead guilty to the fourth count he faced. He said his actions on Jan. 6th and his subsequent prosecution were the result of his first ever activities as a protester.

“Do you want to plead guilty in this case?” the judge asked Kelly after explaining his constitutional rights.

“Specifically to the fourth charge, yes, your honor,” Kelly replied.

“The rest are dismissed,” the judge assured the defendant before moving on.

The factual allegations contained in Kelly’s charging document were then read into the record. Prosecutors said Kelly was caught on camera inside the U.S. Capitol on Jan. 6th.

“Inside White house [sic] via breaking in windows,” Kelly texted in an erroneous statement which mischaracterized the building he had actually entered. “Tree of liberty was watered today!”

That next message became evidence in his case. 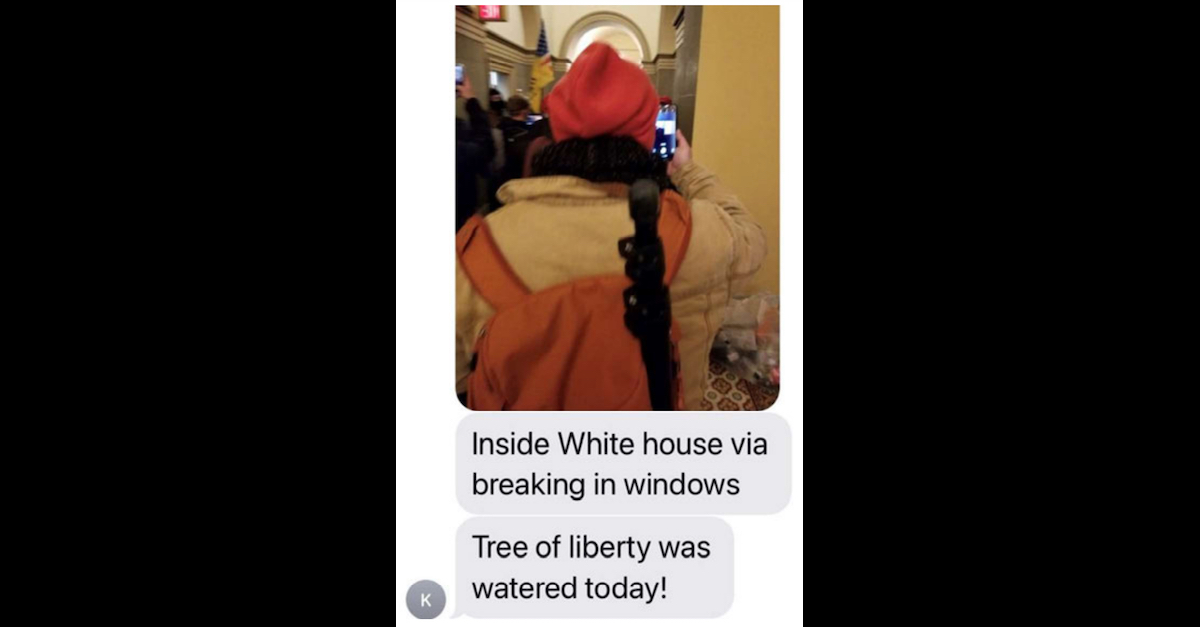 Kelly also texted images of individuals scaling a wall outside the Capitol — again calling the building the White House. He bragged in the messages that politicians were “hiding under ther [sic] desks” and were “[f]orced into recess.”

“Patriots took back our capital [sic] today,” he also said. 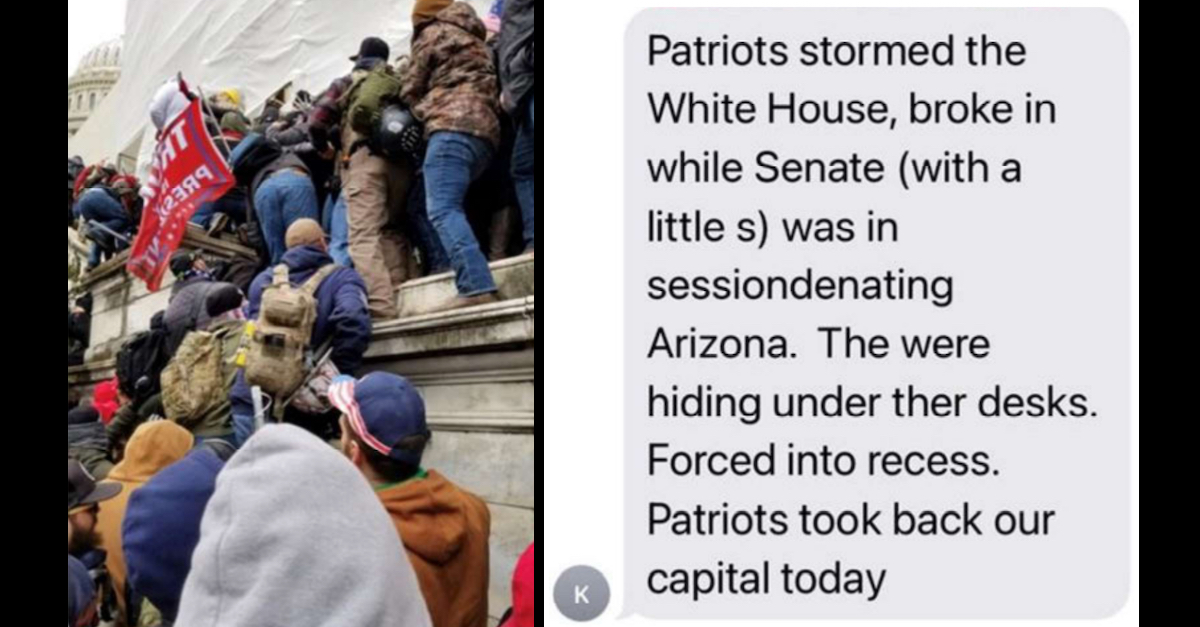 A relative listed as “Witness 1” tipped off the feds that Kelly was inside the facility. According to charging documents:

Specifically, W-1 claimed that KELLY drove to Washington, DC from his home in Florida to attend this riot, “knowing full well they were going to break in.” W-1 further claimed that he/she had text messages that had photos of KELLY and an unknown friend going to the riot and “breaking into the Capitol building via smashing windows.”

W-1 claimed that KELLY held extreme political views and had mentioned “QAnon” a couple months before the January 6 riot.

Kelly, who described himself as an emergency medicine doctor who has not practiced for five months, admitted to Judge Kollar-Kotelly he did not have permission to be in the U.S. Capitol. He also admitted that he was aware Congress was attempting to count electoral votes and that Vice President Mike Pence was present when he and others entered the building.

Kelly’s alleged QAnon tie was not noticeably mentioned during Friday’s plea hearing. However, the remote connection was at times spotty, and the judge forced a halt to the discussions several times clear up facts made difficult to understand due to the poor quality of the audio.

The judge asked Kelly if he was “at the rally” hosted by President Donald Trump and then “walked down to the Capitol.”

But the defendant then attempted to quibble with some of the judge’s characterizations of what occurred.

“There were a lot of people; there were no police” Kelly said in a description of his first set of movements around the Capitol Complex.

“The doors were open,” Kelly added when pressed about whether he thought he could enter the building.

He admitted he later said he saw police officers with batons and shields attempting to guard the venerated structure. 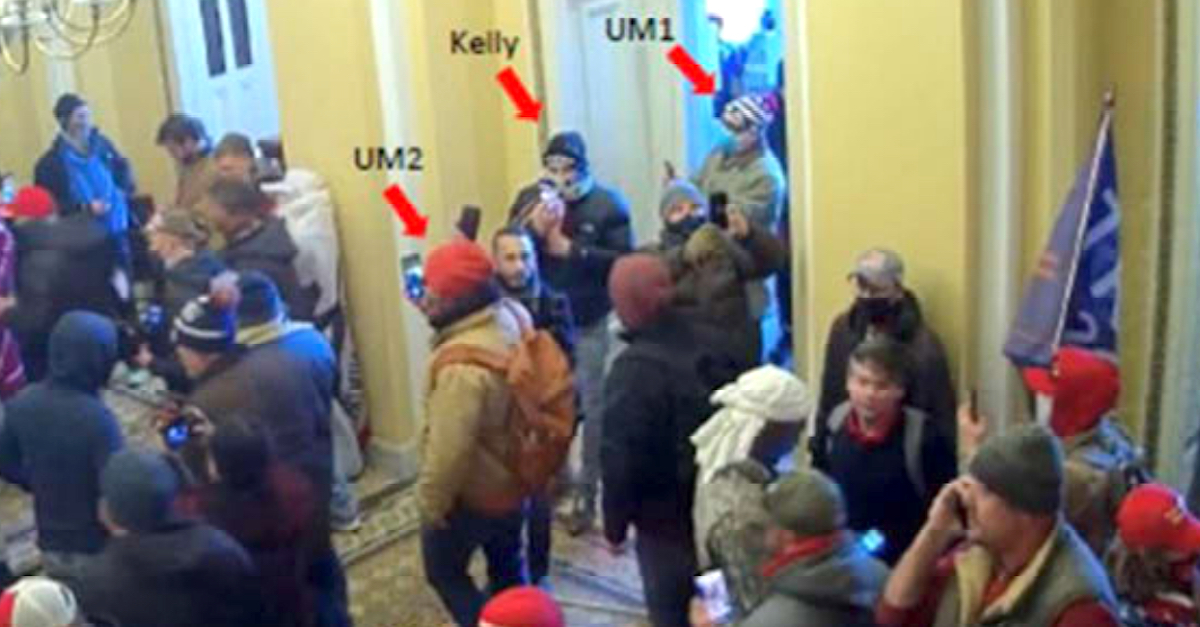 “Did you know that you were not authorized to be in the Capitol at that time?” the judge pressed.

“It’s a secure facility, your honor, so I should know better,” he replied.

“At the time, you knew you should not go into the Capitol?” the judge asked for clarity.

“Yes, your honor,” Kelly said.  “I knew it was a secure building, and I made a conscious decision to walk in; yes, your honor.”

“You could see that the windows were broken?” the judge asked in reference to the text message contained in Kelly’s charging documents.

The judge then referenced Kelly’s message that claimed “patriots” were storming the “White House.”

Kelly said the reference to the White House was an “error on my part.”

Despite Kelly’s attempts to dance around some of the facts to which he said he wanted to plead guilty, the judge succeeded in asking Kelly to admit that the broken windows he mentioned in text messages on Jan. 6 were evidence that protesters weren’t supposed to be entering the Capitol building.

Judge Kollar-Kotelly turned to another of Kelly’s messages that infamous day.

“If you’re allowed to go in some place, you usually don’t climb up retaining walls,” the judge said.

“They were going up any way they could to get on the back steps,” the defendant quipped — again appearing to argue about what the protesters were attempting to accomplish.

Kelly said he traveled to the capitol because he wanted his “voice” to “be heard” in connection with the election.

The judge deftly asked Kelly to admit several of the requisite elements of the crime he to which he was pleading guilty. But Kelly continued to argue back at times regarding his precise motives.

“When you see the police coming out . . . hitting people . . . that’s another indication that you weren’t supposed to be there?” the judge asked.

Kelly ultimately admitted to the full gamut of elements of the crime he was accused of committing. And Kelly again reaffirmed he wished to plead guilty. The judge found that plea to be knowing and voluntary.

The crime Kelly admitted to committing is a misdemeanor punishable by up to six months in jail. Certain probation conditions can attach. A fine of up to $5,000 is also authorized; Kelly will also have to pay a special assessment of $100 the judge said she could not waive.  As part of the plea deal, Kelly agreed to give up most of his rights to an appeal.

The judge ordered a presentence report prior to be completed prior to sentencing.  She noted that Kelly hd already paid $500 in restitution as part of millions of dollars of damage done to the capitol — which the judge noted would largely be paid for by the taxpayers.

Kollar-Kotelly ordered the government to submit a sentencing recommendation by Dec. 20.  Kelly’s attorneys must submit one by Jan. 6 — exactly one year after the events which gave rise to the case. Sentencing itself is set for Jan. 14.

Kelly’s charging documents are below.

[all images via the US Department of Justice/federal court documents]