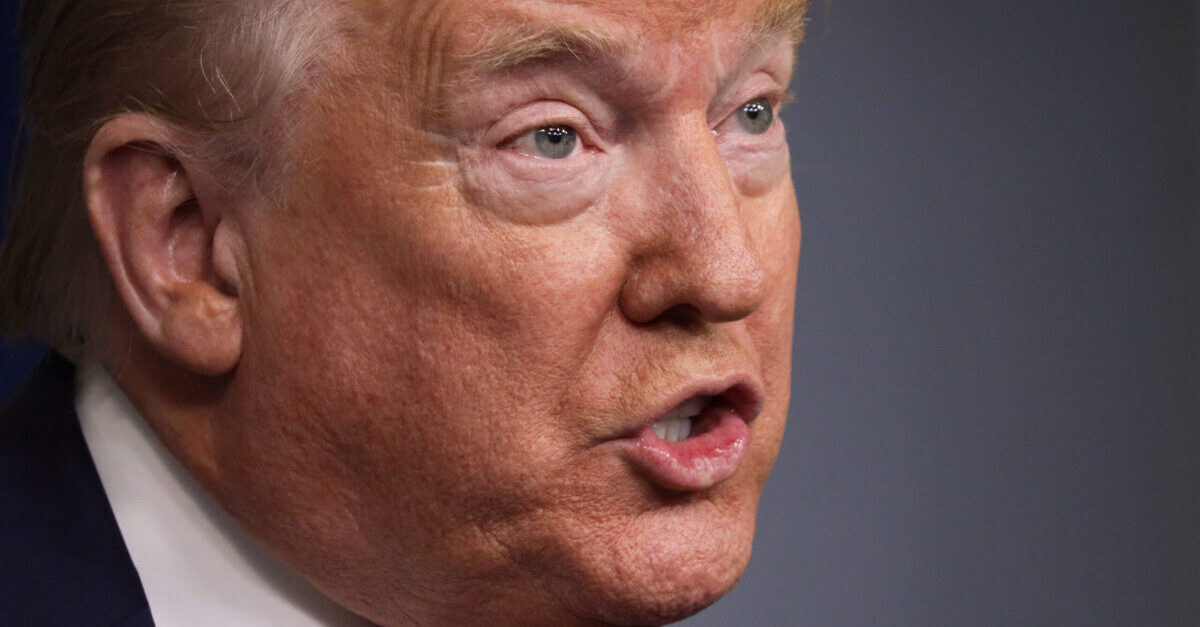 The Supreme Court, in a 7-2 decision on Thursday, said that it is not so that President Donald Trump is absolutely immune to the criminal process, meaning a state prosecutor can move forward with an attempt to obtain Trump’s tax returns as part of a criminal investigation.

“Article II and the Supremacy Clause do not categorically preclude, or require a heightened standard for, the issuance of a state criminal subpoena to a sitting President,” the Supreme Court held in Trump v. Vance.

The President next claims that the stigma of being subpoenaed will undermine his leadership at home and abroad. But even if a tarnished reputation were a cognizable impairment, there is nothing inherently stigmatizing about a President performing “the citizen’s normal duty of … furnishing information relevant” to a criminal investigation. Branzburg v. Hayes, 408 U. S. 665, 691. Nor can the risk of association with persons or activities under criminal investiga- tion absolve a President of such an important public duty.

The consequences for a President’s public standing will likely increase if he is the one under investigation, but the President concedes that such investigations are permitted under Article II and the Supremacy Clause. And the receipt of a subpoena would not seem to categorically magnify the harm to the President’s reputation. Additionally, in the grand jury context longstanding secrecy rules aim to prevent the very stigma the President anticipates.

Shortly after the Vance decision came down, the Supreme Court ruled in Trump v. Mazars.

The High Court held that the “courts below did not take adequate account of the significant separation of powers concerns implicated by congressional subpoenas for the President’s information,” vacating the judgments on the validity of the subpoenas while sending the disputes back to the lower courts [emphasis ours]:

Neither side identifies an approach that adequately accounts for these weighty separation of powers concerns. A balanced approach is necessary, one that takes a “considerable impression” from “the practice of the government,” McCulloch v. Maryland, 4 Wheat. 316, 401, and “resist[s]” the “pressure inherent within each of the separate Branches to exceed the outer limits of its power,” INS v. Chadha, 462 U. S. 919, 951. In assessing whether a subpoena directed at the Pres- ident’s personal information is “related to, and in furtherance of, a legitimate task of the Congress,” Watkins, 354 U. S., at 187, courts must take adequate account of the separation of powers principles at stake, including both the significant legislative interests of Congress and the unique position of the President.

Several special considerations inform this analysis. First, courts should carefully assess whether the asserted legislative purpose war- rants the significant step of involving the President and his papers. “‘[O]ccasion[s] for constitutional confrontation between the two branches’ should be avoided whenever possible.” Cheney v. United States Dist. Court for D. C., 542 U. S. 367, 389–390 (quoting Nixon, 418 U. S., at 692). Congress may not rely on the President’s information if other sources could reasonably provide Congress the information it needs in light of its particular legislative objective. Second, to narrow the scope of possible conflict between the branches, courts should insist on a subpoena no broader than reasonably necessary to support Congress’s legislative objective. The specificity of the subpoena’s request “serves as an important safeguard against unnecessary intrusion into the operation of the Office of the President.” Cheney, 542 U. S., at 387. Third, courts should be attentive to the nature of the evidence offered by Congress to establish that a subpoena advances a valid legislative purpose. The more detailed and substantial, the better. That is particularly true when Congress contemplates legislation that raises sensitive constitutional issues, such as legislation concerning the Presidency. Fourth, courts should assess the burdens imposed on the President by a subpoena, particularly because they stem from a rival political branch that has an ongoing relationship with the President and incentives to use subpoenas for institutional advantage. Other considerations may be pertinent as well; one case every two centuries does not afford enough experience for an exhaustive list.

The bottom line is that in neither case were the president’s assertions of absolute immunity and privilege accepted. Nonetheless, this is far from over.

A *lot* of outlets are getting #SCOTUS wrong.

Yes, the Court rejected Trump's categorical arguments in both the New York & congressional subpoena cases. But neither ruling means subpoenas will be enforced anytime soon. Too much remains to be resolved on remand (and then appeal).

Trump’s tax returns may be guarded by grand jury secrecy; Congress will have to tailor its broad asks. Notably, President Trump’s two SCOTUS appointees sided in cases against him. Keep that in mind as you read the president’s tweetstorm response to the day’s news:

The Supreme Court sends case back to Lower Court, arguments to continue. This is all a political prosecution. I won the Mueller Witch Hunt, and others, and now I have to keep fighting in a politically corrupt New York. Not fair to this Presidency or Administration!

Courts in the past have given “broad deference”. BUT NOT ME!

Trump suggested the Supreme Court is now in on the series of hoaxes and witch hunts and presidential harassments and double standards that have plagued his presidency.

….No Republican Senate Judiciary response, NO “JUSTICE”, NO FBI, NO NOTHING. Major horror show REPORTS on Comey & McCabe, guilty as hell, nothing happens. Catch Obama & Biden cold, nothing. A 3 year, $45,000,000 Mueller HOAX, failed – investigated everything….

….for another President. This is about PROSECUTORIAL MISCONDUCT. We catch the other side SPYING on my campaign, the biggest political crime and scandal in U.S. history, and NOTHING HAPPENS. But despite this, I have done more than any President in history in first 3 1/2 years!

The long road to this day was years in the traveling. Before his 2016 campaign for president, Trump said he would release his tax returns, as U.S. presidents have voluntarily done for decades. In 2016, President Trump reneged on that, citing the “bogus” tax return audit justification.

The Vance case was so named because Manhattan District Attorney Cyrus Vance sought to obtain President Trump’s tax returns as part of a criminal investigation of the Trump Organization (see: hush payments). The Mazars case involved a congressional subpoena of Mazars USA, Trump’s finance firm. Democrats on the House Oversight Committee in April 2019 demanded multiple years of Trump’s tax documents for the purported purpose of providing insight as to whether federal tax laws need to be updated.

In May 2019, Rep. Richard Neal (D-Mass.), the chairman of the House Ways and Means Committee, formally requested the last six years’ worth of President Trump’s tax returns, citing what was dubbed a “little-known provision” in tax code to do so.

Neal said that the Committee was “considering legislative proposals and conducting oversight related to our Federal tax laws, including, but not limited to, the extent to which the IRS audits and enforces the Federal tax laws against a President.”

Trump lawyers said this was not a legitimate inquiry, but was a conspiracy to harass a sitting president.

The Deutsche Bank case involved subpoenas issued by the House Intelligence and Financial Services Committees. The focus of these investigations included whether or not the president committed fraud by inflating his assets on official forms or if he violated campaign finance law by authorizing hush money payments by way of his former attorney, convicted felon Michael Cohen. Additional congressional avenues of investigation centered on whether the president, his business–and his family–may have engaged in or otherwise had anything to do with money laundering.

Trump lawyers called the subpoenas of Deutsche Bank and Capital One outrageously broad.

“The House of Representatives desperately wants President Donald J. Trump’s private financial records. But instead of trying to obtain them from the President, the House Permanent Select Committee on Intelligence and Financial Services Committee issued subpoenas to two banks that have done business with the President: Deutsche Bank and Capital One,” they argued more than year ago. “According to the Banks, the Committees’ sweeping subpoenas seek a mountain of documents—covering at least the last ten years—not only about President Trump, but also his children, their children and spouses, a number of his businesses, and even any affiliates, employees, or agents of those businesses.”

The district and circuit courts declined to block the subpoenas.

Just this week, Deutsche Bank was hit with a $150 million penalty for enabling Jeffrey Epstein. Lawyers said that it appeared the German-based bank had turned a blind eye to suspicious activity indicative of money laundering.

Trump lawyers, highlighting the extremely broad nature of the inquiry, pointed out that the Deutsche Bank subpoenas demanded “among other things, records of every single checking-account withdrawal, credit-card swipe, or debit-card purchase—no matter how trivial or small—made by each and every member of the Trump family.”

Trump lawyers said the president enjoys “absolute immunity” from such things, including the criminal process.