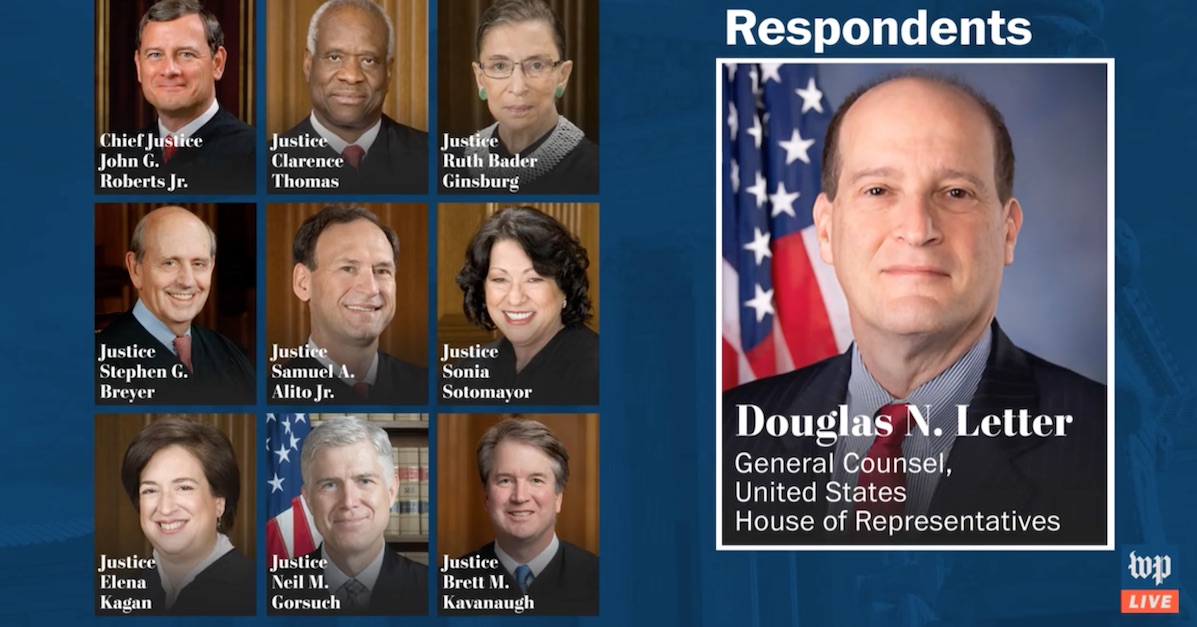 The justices of the Supreme Court, the conservatives in particular, grilled House general counsel Douglas Letter to such a degree on Tuesday morning that many came away thinking that he was in over his head. Letter was pressed to defend and explain Democratic lawmakers’ position on the limits of congressional subpoena power–in the context of seeking President Donald Trump’s tax returns from third parties. After oral arguments in Trump v. Mazars and Trump v. Deutsche Bank AG concluded, Law&Crime founder Dan Abrams said Letter seemed “woefully unprepared” even though he arguably had the legal upper hand.

While it seemed that there was general agreement among everyone involved in the proceedings that the congressional subpoena power exists but has limits, there also seemed to be a clear divide among the justices on how to approach the issue. Liberal Justices Ruth Bader Ginsburg, Sonia Sotomayor, Elena Kagan, and Stephen Breyer time and again catered to a common sense argument that Congress has a legitimate interest in obtaining the president’s financial records because one has to investigate before legislating. But there were times when Kagan and Breyer revealed the cracks in Letter’s case. Chief Justice John Roberts and Justices Brett Kavanaugh, Neil Gorsuch, Samuel Alito and Clarence Thomas, on the other hand, repeatedly pressed Letter to identify the limits of his position and explain why the high court wasn’t being asked to okay harassment of a sitting president. Letter failed to do so, Abrams said.

“From listening to that argument you would never know the House has won every argument in the lower courts. Two cases in the district courts, two cases in the appellate courts. I say you’d never know because Douglas Letter, the attorney for the House, seemed woefully unprepared for the questions that were asked there,” Abrams said on the Law&Crime Network, which is carrying the arguments live. “He couldn’t cite a particular standard for what would in any way constrain or constrict Congress from simply going on fishing expeditions and asking for medical records, et cetera.”

“But most importantly he couldn’t have not known that he would be asked what kind of legislation could Congress create from these requests— he couldn’t cite a single type of legislation,” he added. “Now, that doesn’t mean that their position is necessarily weak legally. It does mean that Douglas Letter was in way over his head in this argument.”

Abrams said that there’s no way House Democrats can be happy about that performance.

“And for Douglas Letter to not be prepared for questions on that … it’s fair to say that it is unacceptable if you are a member of the House and he is your attorney,” he said.

In one back-and-forth, Letter failed to come up with an answer to a couple of questions asked by Justice Thomas.

“On the flip side of that, I think we saw some very strong lawyering from what my be the weaker legal argument from President Trump’s lawyer Patrick Strawbridge and the Department of Justice lawyer Jeffrey Wall, both taking on some of the trickier questions from the liberal justices,” he said. “One has to wonder, in listening to the questions, whether now it is an uphill battle for the House to win this, in particular because even Justice Breyer expressed some concerns, Justice Kagan expressed some concerns about not having a standard that involves some letter of increased scrutiny when it comes to the president of the United States.” You can watch Abrams’ criticism in the embed above.

Abrams was not alone among legal observers who were not impressed with Letter’s performance.

When you're arguing a case that pits one branch against another, you need a limiting principle to reassure the justices that one branch won't get out of control and encroach upon another branch's power. It's textbook. And Letter can't identify that principle.

Kavanaugh correctly tells Letter that he has failed to establish a limiting principle for a "valid legislative purpose."

"That's the concern I identified" from other justices' questions, Kavanaugh says. "I want to give you a chance" to explain "why it wouldn't spiral."

When you're arguing a case that pits one branch against another, you need a limiting principle to reassure the justices that one branch won't get out of control and encroach upon another branch's power. It's textbook. And Letter can't identify that principle.

A disaster. He seems to be losing Breyer. https://t.co/gL9W7rewtc

Douglas Letter, who is arguing in favor of Congress being able to subpoena Trump’s financial records, is not doing a good job addressing the justices’ concerns or even taking some of the lifelines the liberal justices have tried to throw him.

Douglas Letter is drowning in the questions by the #SCOTUS but not bringing his answers back to the issue at hand. Congress’ is essential for oversight, and its investigatory powers are required to look into concerns that can be addressed through legislation.

You should be making the arguments on behalf of Congress right now. Douglas Letter seems palpably under-prepared. https://t.co/EQqDHSAGHV

Breyer pressing the House on threats to the Presidency itself, rather than facts about this specific case. But House keeps retreating to facts of this case.

Letter did have his moments of rhetorical flourishing.

Perhaps the most memorable response from Letter, at least on the question of whether the congressional subpoenas are too burdensome, was this: “Not a single thing is required of the President or the White House.”

Some suggest that the main takeaway here is that this case is a closer call for SCOTUS than many have assumed.

I tried to tell people there were close issues here, but I mostly got shouted at. Hopefully the oral argument were informative about the difficulties facing SCOTUS. On to the next case …