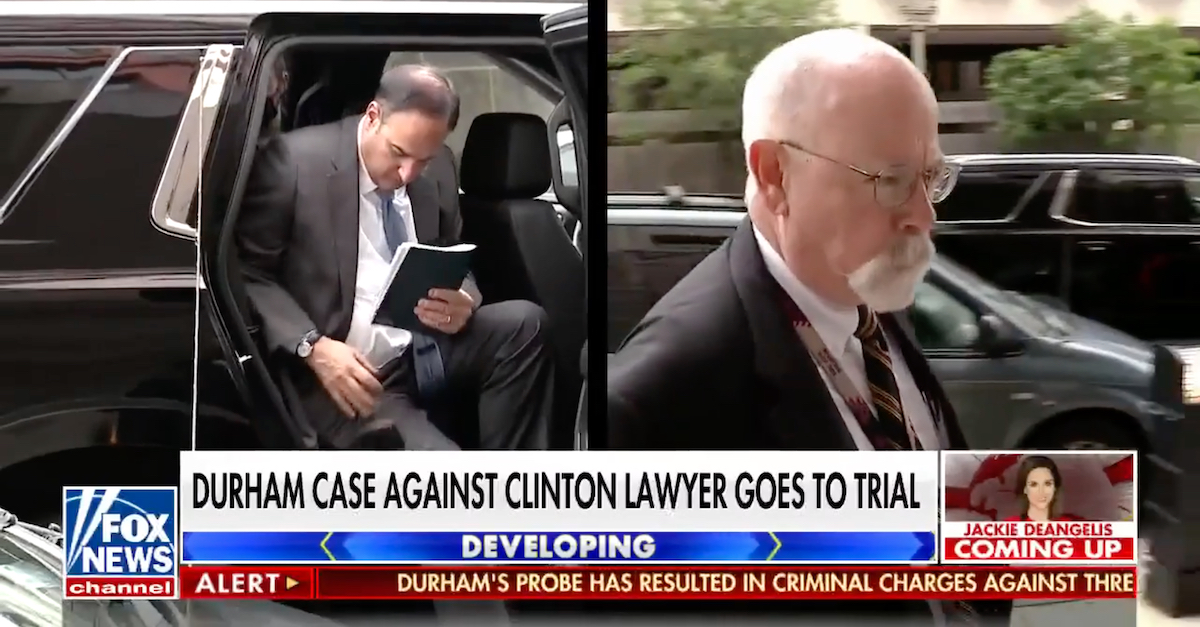 Opening statements began Tuesday morning in the federal false statement trial for former Perkins Coie cybersecurity lawyer Michael Sussmann. The government started the proceedings off by blasting the onetime Hillary Clinton presidential campaign apparatchik as an elite attorney who tried to use the FBI for his own partisan ends.

“We are here because the FBI is our institution,” U.S. Department of Justice Trial Attorney Deborah Brittain Shaw, told jurors in Washington, D.C. “It should not be used as a political tool for anyone – not Republicans. Not Democrats. Not anyone. Whatever your political views might be, they cannot be brought to your decisions.”

A running thread of the day’s goings on at the E. Barnett Prettyman building was provided by Reuters correspondent Sarah N. Lynch:

Greetings from the federal courthouse, where the trial for Michael Sussmann, an attorney who once represented Hillary Clinton’s 2016 campaign, is getting underway

Shaw and fellow federal prosecutors Andrew DeFillippis, Michael Keilty, and Jonathan Edgar Algor IV are representing the government as the trial team for special counsel John Durham‘s years-long investigation into the origins of the Russiagate investigation.

“No one should be so privileged to have the ability to walk into the FBI and lie for political ends,” Shaw added, according to ABC News DOJ correspondent Alex Mallin‘s own Twitter thread of the proceedings — “whether he hate[s] Donald Trump or like[s] him.”

Sussmann stands accused of one count of making a false statement to the FBI over the circumstances of an unconfirmed, ultimately false, tip he gave to then-FBI general counsel James A. Baker on Sept. 19, 2016. The indicted attorney allegedly claimed he was acting in his capacity as a private citizen and “not on behalf of a client or company” when he gave that information about an alleged connection between Donald Trump and Russia’s Alfa Bank. In one message cited by Durham in the indictment, the defendant said he just wanted “to help the Bureau.”

Durham and his army of attorneys claim that Sussmann intentionally obfuscated his work for the Clinton campaign and that this lie had the potential to impact the FBI’s investigation. Under the relevant statute, a false statement must also be “material” to constitute an offense. Previously, the judge overseeing the case ruled that the “materiality” element is a question for the jury to answer.

Notes taken by former FBI Assistant Director Bill Priestap and submitted into evidence by Durham’s team acknowledged that the FBI knew Sussmann was an “Atty: Perkins, Coie” [sic] who “Represents DNC, Clinton Foundation, etc.,” but that Sussmann apparently “said” he was “not doing this [e.g., presenting the tip] for any client.”

According to George Washington University Law Professor Randall Eliason, materiality “is a very low bar” but is “still a challenge for the government here” due to the stand-alone nature of the charge and the fact that it allegedly occurred some six years ago.

Attorney Michael Bosworth started off the defense’s opening statement by saying his client “did not lie to the FBI” and framing Sussmann as a man who loves the agency and agrees that it is “our institution.”

Bosworth went on to argue that his client was actually trying to help the FBI so that they wouldn’t be caught “flat-footed” when the news media reported on the possible Trump-Alfa Bank connection. Additionally, the defense said, Sussmann only “generally” worked for the Clinton campaign at the time, but was not working in that capacity when he went to the FBI’s offices on the day in question.

Former New York Times journalist Eric Lichtblau has been named as a defense witness due to his communications with Sussmann; Durham has sought to question him broadly.

The prosecution has long disputed the defendant’s version of events — noting in court documents that he “repeatedly billed the Clinton Campaign for his work on the Russian Bank-1 allegations.”

Before jurors on Tuesday, Shaw cast Sussmann as a man who launched a plan to “create an October surprise on the eve of the presidential election — a plan that used and manipulated the FBI.”

The prosecutor alleged that plan was three-pronged: “A look. A leak. And a lie.”

[image of Sussmann via YouTube screengrab; image of Durham via DOJ portrait]