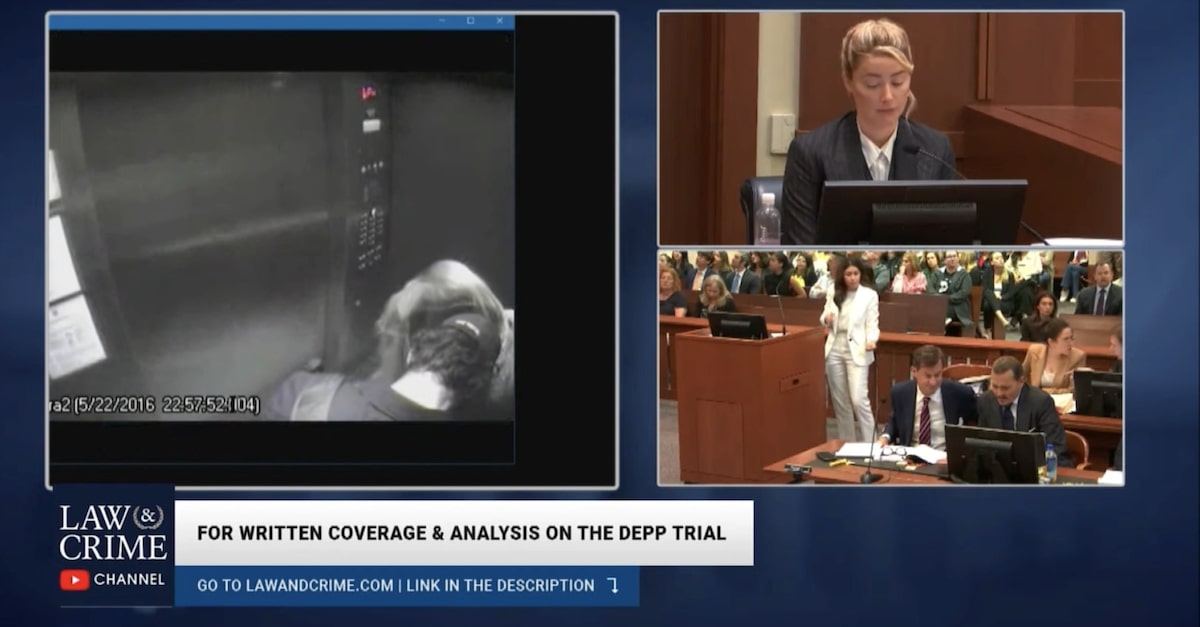 Less than a week before Amber Heard filed for a restraining order against Johnny Depp, the actress appeared to cuddle with actor James Franco in an elevator going up to her Los Angeles penthouse. After Heard testified that she forgot when the visit happened, Depp’s attorney rolled tape on the surveillance footage for the jury.

CCTV video shown of James Franco getting in the elevator with #AmberHeard the night after the fight at the penthouse when police were called. #JohnnyDepp pic.twitter.com/jBm3GwdbWL

On May 22, 2016, minutes from 11 p.m. Pacific Time, Franco enters the elevator and rests his head against Heard’s neck. She leans into his baseball-cap adorned head, before the elevator reaches her penthouse and the two of them exit.

Far from a trivial detail of Hollywood gossip, the briefly captured footage has proven to be a key piece of evidence in Depp and Heard’s ongoing defamation trial in Virginia. The encounter took place some five days before Heard filed for a restraining order on May 27, 2016, on what was then his daughter Lily-Rose Depp’s 16th birthday.

Heard previously claimed that she filed for the restraining order in part to try to change the locks, but Vasquez said that Heard attempted to do so days earlier. The attorney said that Heard knew Depp was heading out on a European tour around the time, but the Aquaman actress denied knowing the details.

“I’m not quite sure what I understood of his schedule at that time,” Heard claimed.

“You knew he wouldn’t be back for weeks, right?” Vasquez pressed, referring to Depp.

Throughout her testimony, Heard claimed that Depp flew into jealous rages about Franco, a man much closer to Heard’s own age. Depp is now 58, and Heard is 35. Franco, now 44, had co-starred with Heard in the past, and according to Depp, he had a reputation. Depp claimed that Heard described Franco as “creepy” and “rapey.” (Several women later accused Franco of sexual misconduct in 2018.)

Heard has cast Depp’s supposed jealousy toward Franco as an example of his effort to control her life and career—and an excuse for alleged physical violence. In May 2014, Heard claimed, she had been on a cross-country flight when Depp attacked her because she had been shooting The Adderall Diaries with Franco. The next year, Heard said, she and Franco had been in a TV series together. Heard testified that she was surprised to learn that the producers hired a body double for a sex scene with Franco.

“So I have an incredibly jealous man who already is upset with me for breaking the ‘rule’ that I had a sex scene,” Heard testified on Monday. “On top of that, I’m telling him, it wasn’t me. I didn’t shoot that scene. And you can imagine how upset he was.”

On that occasion, Heard claimed, Depp slapped her and punched her in the face.

Shortly after Heard filed for her restraining order, People magazine received a photo of her apparently bruised face. On cross-examination, Depp’s lawyer has picked apart a series of photographs offered by Heard into evidence, suggesting and outright alleging that they were altered. The domestic abuse scandal simmered for roughly two years before Heard published an op-ed in the Washington Post depicting herself as a survivor of intimate partner violence. Depp sued her over the editorial, even though it didn’t explicitly name him. Heard countersued after one of Depp’s lawyers described her allegations as a “hoax.”

Heard’s testimony completed during the afternoon session, after her attorney Elaine Bredehoft took over questioning on redirect.