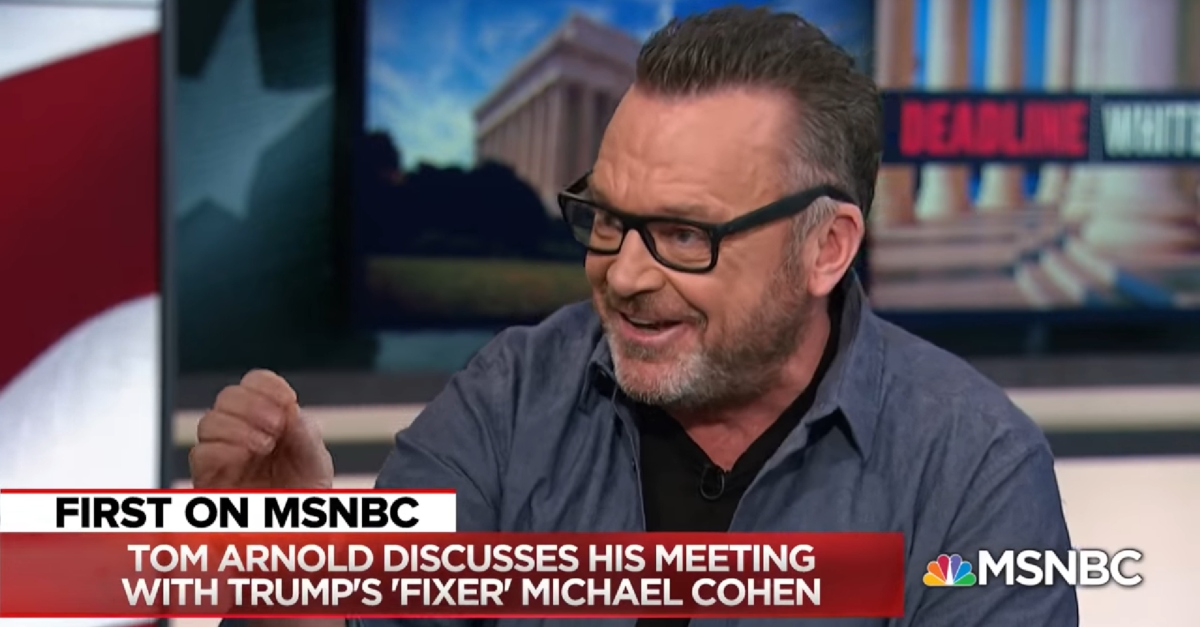 Actor Tom Arnold‘s incidental June 2018 meeting with former Trump lawyer Michael Cohen contributed to the fixer’s disintegrating relationship with the president, according to a report from The New York Times. From the article:

Distrust between the two sides only grew in June when the comedian Tom Arnold tweeted a selfie with Mr. Cohen and later claimed that they were teaming up to take down the president. [Trump lawyer Rudy Giuliani], sounding alarmed, phoned [Cohen’s then-legal adviser Robert J. Costello] while he was having lunch at Bobby Van’s Steakhouse — the president wanted to know what this was about.

After lunch, Mr. Costello tried to reach Mr. Cohen, who was slow to reply. “Is he totally nuts???” Mr. Costello wrote in frustration to his law partner. “He is playing with the most powerful man on the planet.”

When Mr. Cohen finally sent along a clarification from Mr. Arnold, Mr. Costello texted Mr. Giuliani. “Make sure your client knows this,” he wrote. “He will sleep better.”

Cohen was still playing nice with the Trump team at this time, but Arnold’s statement about them “taking Trump down together” exacerbated a tense situation. Cohen’s relationship with Trump team had been falling apart for a while, with Giuliani being noncommital as to whether the president would issue a pardon. Trump’s business and campaign reportedly stopped paying Cohen’s legal bills last June, and didn’t agree to his request to pay his new lawyer Guy Petrillo.

Cohen publicly called the Arnold meeting a “chance, public encounter in the hotel lobby where he asked for a selfie,” and insisted they never talked about Trump. He privately had Costello pass along this clarification from Arnold:

According to Costello, Cohen asked to sort things out with Giuliani, and tell Trump that he was still loyal. Alas, it wasn’t enough to save Cohen’s relationship with the president’s team. He publicly split from Trump in July, and he first spoke with Special Counsel Robert Mueller‘s team on August 7. He pleaded guilty a couple of weeks later in one case, and again in November.

We not saying Tom Arnold caused Michael Cohen to flip. We’re just saying he seems to have been a contributing factor.