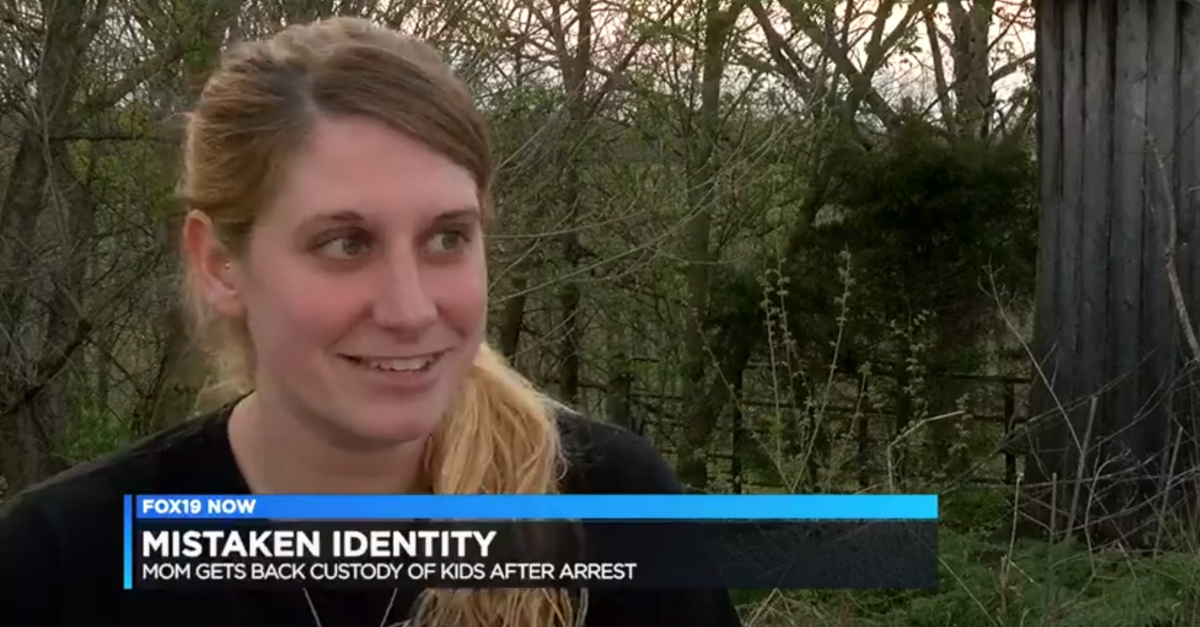 It’s safe to say the month of April was really crappy for Ohio woman Ashley Foster. She was arrested and spent seven days in jail after law enforcement mistook her for a drug trafficking suspect with the same name, according to Fox 19. A spokesman for the Hamilton County Sheriff’s Office apologized for the situation, but that was only after after Foster dealt with a whole lot of headaches.

We already mentioned the seven days in jail. She also lost her job, and temporarily lost custody of her two sons amid the arrest. Insult to injury: She went to retrieve her car from the Target where the arrest occurred, and found that it had a flat tire, she said.

She and child protective services sorted things out after a 10-minute meeting on Friday. She has her kids back.

“I was expected it to be this big deal, and it wasn’t at all.”

She planned on having an Easter get-together with the boys and their fathers.

BREAKING NOW & ONLY ON @FOX19 Clermont mom gets custody of her two sons back after being mistakenly jailed 7 days “I got custody back!!! Everything went so smoothly! Were doing family easter tomorrow with both boys!!” – Ashley Foster #PrayersAnswered on this #GoodFriday pic.twitter.com/zOuOassbRX

“They showed me the computer, everything they had in front of them,” Foster said. “It was my ID, my picture, my birthday, my social security number, but it was not my address.” She said she told authorities that they had the wrong person. They didn’t believe her. Her sons were in the car at time, she said. Foster claimed authorities wouldn’t let her feed the eight-week-old, or change his diaper.

“I listened to him scream,” she said.

Foster said she spent five days in a Hamilton County facility, then two in Brown County. Officials at both sites told her they couldn’t tell her anything, she said. Brown County was worse, but her cellmates were nice.

Officials released her. She claimed that Aberdeen Police David Benjamin never apologized for the treatment.

“He just said, ‘Thank you for your time,’ he left,” she claimed. Benjamin confirmed they spoke Thursday.

Lt. David Daugherty sounded more contrite in a statement, but didn’t acknowledge any wrongdoing, at least by his office.

“I’m very sorry that this happened to her,” he said. “From everything we’re looking at, the Hamilton County Sheriff’s Office followed policy.”

Brown County Prosecutor Zac Corbin told The Cincinatti Enquirer that they let Foster go after an Aberdeen police officer realized they had the wrong woman. He said Ashley Foster (the actual suspect) and her co-defendant James Beckett, Jr. fled, and an warrant was put on the wrong Ashley Foster.

The innocent Foster is scheduled to meet her attorney on Monday.